Showing posts from May, 2019
Show All

Boyzone "Thank you and Goodnight Farewell" Tour in MALAYSIA 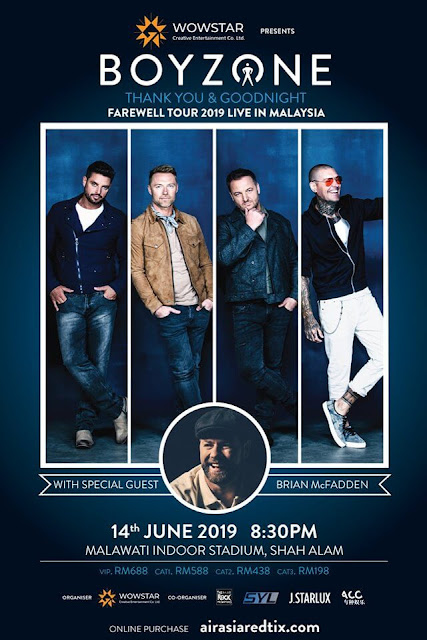 He left Westlife in 2004 to begin his solo career and released the single “Real to Me,” a track in his debut solo album “Irish Son.”

In 2016, McFadden and Boyzone’s Keith Duffy formed the group Boyzlife and toured the world, performing their bands’ hits.

Boyzone’s Duffy, Michael Graham, Ronan Keating and Shane Lynch will be performing some of their greatest hits including “When You Say Nothing At All,” “No Matter What” and “Love Me For A Rea…
1 comment
Read more 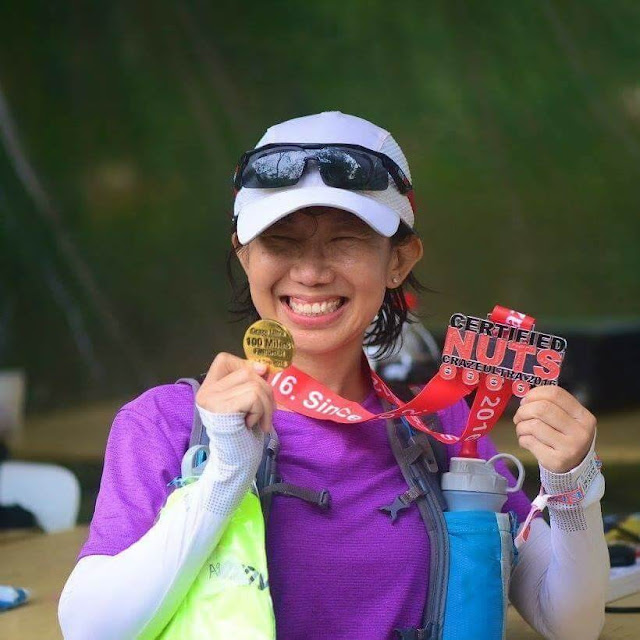 Justice For Evelyn Ang Gek Suan The 2017 Klang International Marathon saw an incident that has changed many lives forever. Teoh Thiam Lim, 28, who is currently being charged under Section 41 (1) of the Road Transport Act 1987, drove into three people. The final result of his reckless driving was two injured and one dead. Evelyn Ang Gek Suan died two months later, after not being able to pull out of a coma due to the result of the incident. This death has left family and friends shattered. There is still no closure as yet, as the outcome of the case against Mr. Lim is yet to be determined.
The case has had numerous postponements, for reasons unbeknownst to the public. Finally, on December 19th 2018 the hearing began and the first witnesses were called. The Deputy Public Prosecutor (DPP) at the time heard and was able to question 7 of the witnesses and see firsthand 25 exhibits that were tendered in as material evidence. Then there was a change in DPP in February 2019, after the witness…
2 comments
Read more 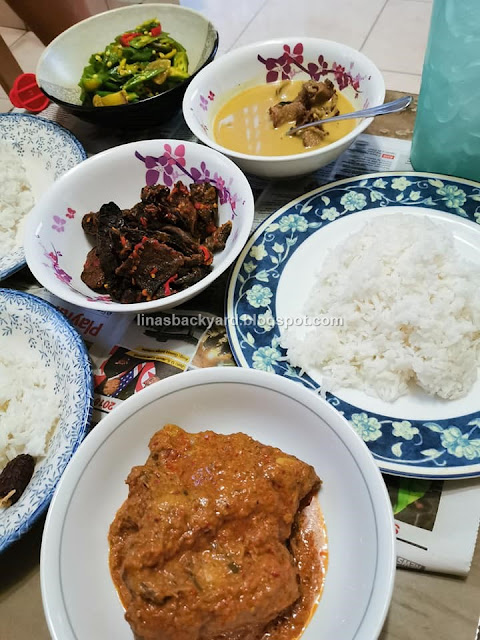 We're halfway through Ramadan month already. How time flies.
I've tried to fill the month with quality activities and somehow it turned out that one of the things that I forgo is blogging.
Ah well...
For many Malaysians - Muslims and non-muslims alike, Ramadan is the time to enjoy buka puasa and the many choices one can have for buka puasa. Be it at pasar Ramadan, buka puasa buffet at hotels and restaurants that always come up with plenty of offers and promotions, or at mosques and suraus or just enjoying special home cooked meals at home.
I'm also up by 4:30am everyday to prepare for sahur.
We usually buy food for our buka puasa at pasar Ramadan (well, we also need to help traders, right? hehe) but I always cook sahur. Nothing special or heavy but the challenge of thinking up what to cook each morning is quite fun.
Interestingly, Ramadan month is the month that somehow, I can survive with just 4-5 hours sleep each day.  Buka puasa at home is always nice.
We're not re…
2 comments
Read more 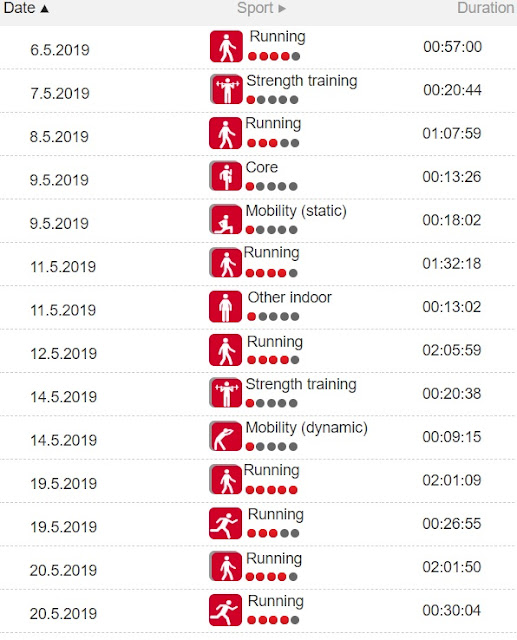 From end of June till August, I have several races lined up from fun runs such as the Milo Breakfast Day on June 30th to Hulu Langat Marathon on July 7th and also a few half marathons and 15K here and there. And somehow, I also registered for The Magnificent Merapoh Trail in late August!
After my Nagoya Women's Marathon in early March this year, I only had a few runs in both March and April. I was feeling severely lazy and uninspired (when it comes to training lah).
Being busy with my freelancing stuff on top of my regular 9-6 job wasn't exactly helping either as I seemed to be getting a lot of jobs with really tight deadlines. Of course, it was just an excuse, I could have find the time if I really want to.
It may be a weird time for some to choose the Ramadan month to return to a training regime but that's what I have managed to do so far.
Being able to go off from work earlier at 4:30pm really helps and I certainly didn't mind coming to office much earlier to com…
2 comments
Read more 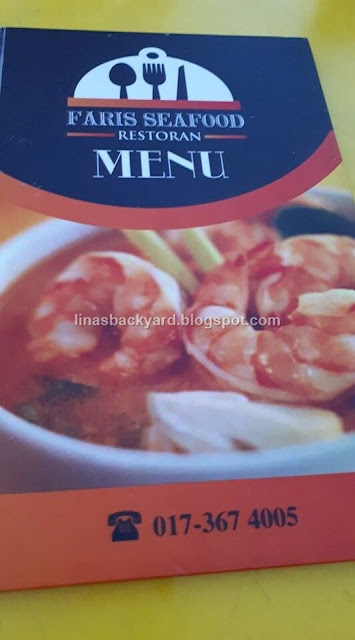 We usually head to a nearby tomyum place located at a corner lot house nearby our home for dinner.
But after several times of experiencing "no stock available" for my order and the fact that the staff or the owner never reprimanded diners who smoked there, we decided to try out a rather new place much nearer to our home.
I don't really mind if occasionally the place didn't have items to cook a particular dish that I wanted to eat because I can always change my order but I really hate the fact that smokers can freely smoke at their outlet despite government's directive of banning smoking at eateries.
So while they maintained their happy smoking customers, they lose us. Probably it isn't a big deal to them anyway. Haha
Anyways, back to new makan place which is less than a km away from our house. It's called Faris Seafood and it is a proper restaurant with some Thai staff at the shop. Our drinks - sirap bandung for me, sirap for hubby and coffee for son. Yu…
16 comments
Read more 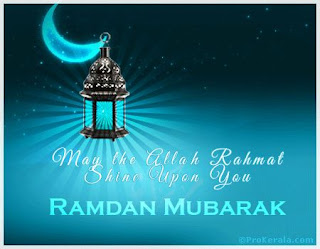 It's already the 7th day of Ramadan today.
Time sure flies, right?
Life is as usual this Ramadan but of course, we're blessed with employers who allowed us to go off an hour earlier everyday (provided we come in earlier too) and managed to buka puasa at home.
Life is a blessing and we're blessed to be able to experience another Ramadan and hopefull Syawal too.
Ramadan Kareem, everyone. May the Spirit of Ramadan stay in our heart and illuminate our soul from within.
2 comments
Read more 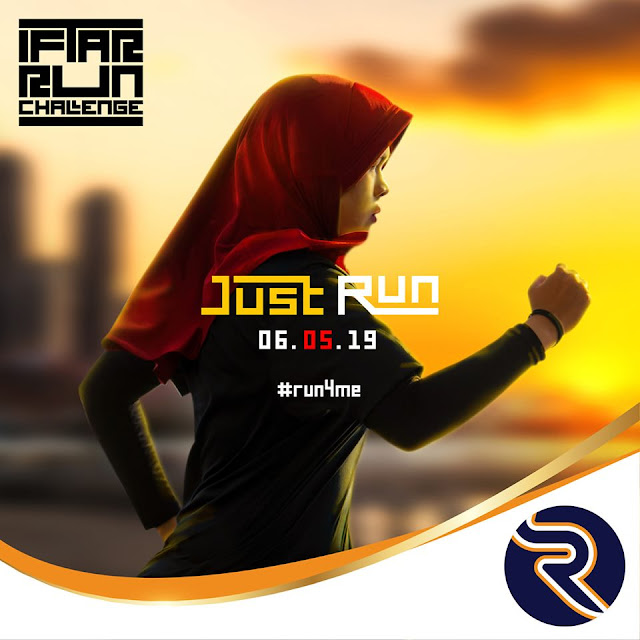 Ramadan may see a quieter running scene all around Malaysia but fasting is definitely not a excuse to not maintain oneself's fitness or avoid any running.
SOFEA Run, supported by 10 Senses and Proton HSN 21km 2019 has an ongoing campaign for the first two weeks of Ramadan, called the Iftar Run Challenge. Did you know that run during fasting can burn your body calories more effectively?
Yes, this means that it's easier to maintain your ideal body weight and shape! 👍
Register and join the Iftar Run Challenge using SOFEA Run app today and start running!
Besides getting the motivation to run (now that there are less races during the fasting month), by joining the Iftar Challenge 2019, you are donating 80% of your registration fees to the Orang Asli of Kampung Lemoi, Cameron Highlands.
If you remember, a group of their primary school kids came and ran in the Kids Dash at Twincity Marathon earlier this year and they managed to almost make a clean sweep of all the top prizes.
You …
2 comments
Read more

The Secret Is Out At Barcook Bakery Malaysia 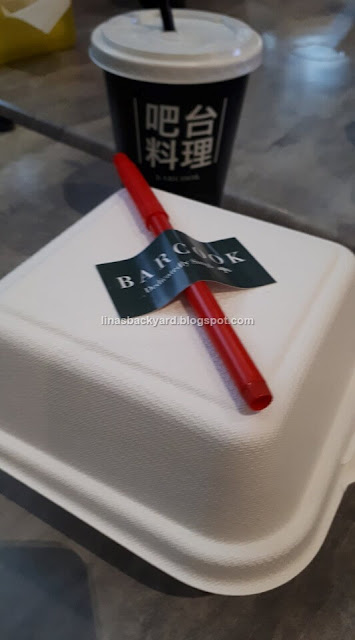 They are made with light, fluffy sponge cake with fresh components and luxurious fresh whipped cream. Why is it called a Secret Bento Box?

Because, we can customize our bento box with our very own secret message and design and present the bento box to our loved ones, colleagues, friends or family.

Perfect for a personalised gift for our sweet-tooth special ones.
So what is Hubby writing?

This is the Oreo Korean Secret B…
6 comments
Read more 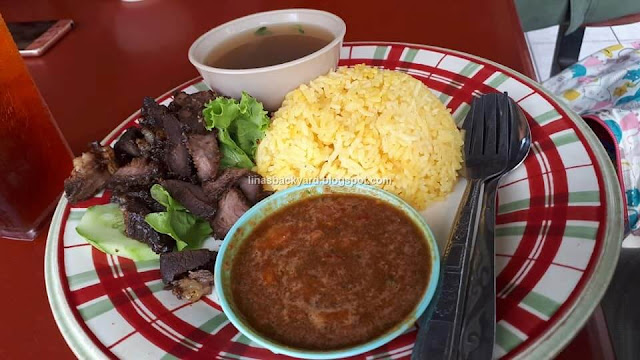 We had a luxurious vacation, staying at The Danna Langkawi in mid-April.
Although we stayed in a luxury hotel, we didn't spend the whole vacation splurging on expensive food too.
A short distance away from Langkawi airport are many eateries dotted along the road in Padang Matsirat.
We stopped by a medan niaga, and had a really nice Nasi Daging at a stall called Kak Long Sup Kedah. Really yummy.
The rice flavourful and soft. The daging bakar soft and sweet with its marinade and served in a generous portion. The sambal not too spicy.
And they certainly won't break the bank. Our trip to Langkawi won't be complete without a stop by the beach at "Pantai Airport" for Laksa Ikan Sekoq. And the three of us shared this really filling cendol pulut kelapa. Our last meal in Langkawi, before we boarded our flight back to KL was at Halim Gulai Panas Airport.
We had a Kerapu fish head gulai and fried squid.
Sedapppppp...

Definitely recommended for those visiting Langkawi. An…
4 comments
Read more 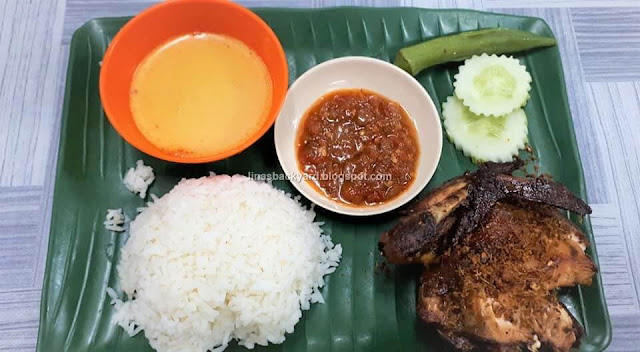 Lately, we've been frequenting the Dayang Sarawak Corner in Sungai Besi, especially if our drive home took longer than usual because of traffic jam so we would stop there for our dinner first.
For me, I didn't order their famous mee kolok or laksa Sarawak though, but Hubby ordered that a few times. I do like their Nasi Kukus Ayam Dara, with its nice and hot chicken that's quite soft and flavorful.  This was Hubby's order the last time we were there, Nasi Kukus Ikan Bawal.
6 comments
Read more
More posts