Showing posts from April, 2009
Show All

- April 30, 2009
Tomorrow is Friday and it's going to be a long weekend for us. Labour Day falls on Friday, and we get three days off. Woot!

Happy Labour Day everyone and have a good rest. 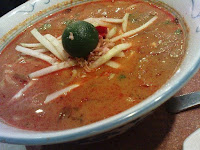 Before we went to the Backyard Monsters and Dinosaurs exhibition last Friday, we went to have dinner at Little Penang Cafe.

It was quite noisy there because of the din made by the stage at the Centre Court set up for the Fashion Week event. But still, we had a nice meal there.

While I had my usual, Penang Hokkien Prawn Mee. Absolutely delicious! I love the gravy here.

Here's Raimie having a bit of problem with his Laksa Lemak. He said it was too spicy for him. Luckily there's cincau drink for him to drink. :)

All our bowls and plates eventually were passed to Zaini. He always ended up finishing after us. He ate Raimie's Laksa Lemak and finish all my Prawn Mee gravy. Zaini always complains that both me and Raimie made him eat a lot because we are small eaters and there are always a little bit leftover on our plate.

We didn't order any Char Kuey Teow because we were too hungry when we got there, but my prawn mee is …
8 comments
Read more

Checking Out Backyard Monsters And Dinosaurs 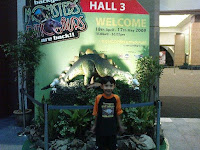 I finally gave in to Raimie relentless requests to drop by the MidValley Exhibition Centre to see the Backyard Monsters and Dinosaurs exhibition.
When buying the ticket, I was informed by the counter staff there that the so-called staff discount wasn't in the system and they had no idea of the discount. There was one other girl planning to buy tickets with the staff discount but was also told by the counter staff to wait for them to clarify with their supervisors. A long call was made to their supervisors and finally we got the our discounted tickets, but the whole scenario left a bad taste in my mouth. (I would've left in a huff if it wasn't for Raimie making doe-eye to me. I try to refrain myself from acting like a b**ch in front of him) 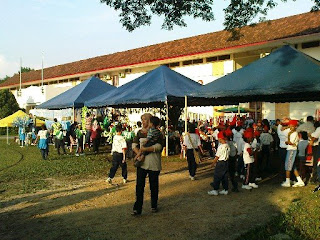 Last Saturday, Raimie's school had their 51st annual sports day event. We were up as a usual school day because the event starts at 7.30am. But we still managed to grab a quick breakfast at the Mamak stall first!
The day was sunny and ideal for a sports day event. The sports field kinda had a carnival feel to it, what with several stalls being set up selling food items like fruits, burgers, and drinks. Not to mention the songs that were blaring from the sound system.
The Sports Houses' teachers and students busy decorating their tents. Raimie is in green house.


The Sports Parade, led by the Boy Scouts.
Zaini got roped in as a judge for the most decorative tent (Khemah tercantik). I got busy checking on the boys (Raimie and his friends) get enough fluid as it was really hot that day. Rows of hampers and medals for students, parents and teachers participating in the Sports Day
Raimie entered five events - three Sukaneka type ones where he need to 1. run with a small bean bag held on…
15 comments
Read more

No Monday Blues For Us Tomorrow!

- April 19, 2009
Yeay! No work for both me and Zaini and no school for Raimie tomorrow. We are taking a day off tomorrow as Raimie's school declared tomorrow, Apr 20 as a Cuti Peristiwa. Raimie had his Sports Day on Saturday and have the Monday off.

Raimie entered a few events for his house (he's in Green House) but he didn't take back any medals. That's OK. He can always do better next year and follow Zaini's footstep in representing his house and school in athletics next year. No pressure. LOL

So, tomorrow we get to spend an extra day at our own home instead of FIL's house (we stay there during school days) and enjoying each other's company. Looking forward for a late night dropping and visiting blogs tonight and getting up late tomorrow. 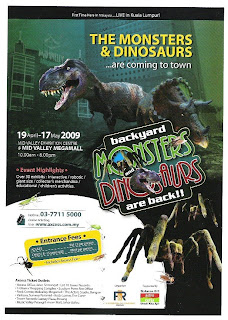 Backyard monsters and dinosaurs are coming to town!

Cool event at MidValley Exhibition Centre starting from tomorrow, Apr 19. Wanna check them out? Ticket price: RM12.00 for adults and RM8 for children age 5 and above.
Maybe I'll take Raimie there sometime in the near future. After all, the exhibition is on until May 17. Have to wait until payday! LOL
p.s. Click on the photo to see further info.
6 comments
Read more 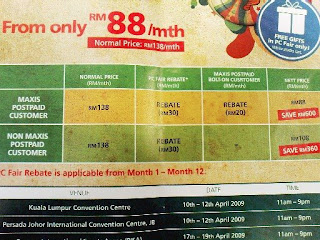 After mulling over a few options, we decided to hang on to Maxis Broadband even though there are times we suffer with the slow internet connection.

We looked at Digi - too bad the coverage doesn't cover our home in Balakong. P1 W1max does not even have coverage in MidValley let alone FIL's house in Jalan Bangsar. (Pity as they do have coverage in Bangsar and Brickfields). Celcom seems too expensive due to the need to purchase the modem. Streamyx doesn't have the mobility we need (we need to have connection in two homes).

Anyway, our existing Maxis Broadband account is under Zaini's name and we've always felt that it was a tad too expensive to pay a monthly fee of RM143.00.

So, when we saw this promotion at PC Fair, we decided to change our account to my name and pay RM88 (well, at least for a year anyway) to my name.


I just wish that our internet connection will improve in the near future. It is now atrociously fickle with slow and fast (never full capacity) alternatin…
9 comments
Read more 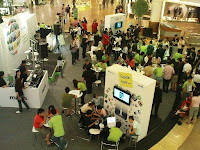 Anyone went out to get the iPhone yet? We saw plenty of interested consumers at Maxis iPhone 3G roadshow at MidValley last week.

But we were more interested in the Big Blue Exhibition at the East Atrium. I wanted to buy some souvenir items there, but everything was too expensive. A child t-shirt already cost RM95.00. I have to pass... 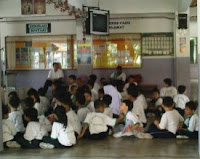 Every Wednesday for the past three weeks, Raimie had to be at school in the afternoon for sports day training. Instead of him staying at school until the time, he still came home at 1.00pm so that he eats ate home, shower and rested a bit before going to school again. At 2.30pm, the children will make their way to the Assembly Area before heading off to train Raimie's school doesn't have a sports field so the children train here at the car park area. On the Sports Day itself, the school will use the neighboring school's field for the event. Raimie waiting for his turn to train for 50m dash. Training for the high jump at the Assembly Area. At least the children were spared from the heat of the sun.Well, Raimie may not win as many sports medals as his father, but that's OK. The important thing is he enjoys them. On Saturday, we will be going to his Sports Day. Wish him luck!
4 comments
Read more 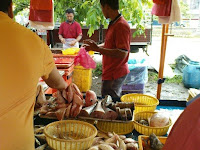 Can't wait for the weekend! Weekend is the only time I cook for my family. Raimie is lucky enough to have a home-cooked meal every day as his Uncle stays at home and cook for the three of them (uncle, father-in-law and Raimie).
Zaini and I usually take the easy way - eat out on weekdays. Not a healthy diet, I know.

So, weekend is market time and cooking time for us! Actually, we seldom go to morning market or Pasar Tani, preferring to go to a nearby hypermart or just dropping by to Jusco instead.

A visit to Pasar Tani was an event, and a rather fun one too last week. For those who have no idea on what Pasar Tani is, check our my other ramblings about Pasar Tani.
We splurged on seafood - bought some huge squids and a fish head apart from vegetables. The freshwater fishes were so fresh, they were still flipping around on the table!

Instead of heading to Kampung Attap for my fish head curry fix, we had one home-cooked. But it was rather watery for Zaini's liking. I'm not good wi…
10 comments
Read more 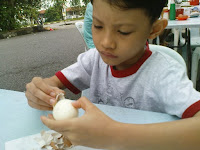 Last Sunday, we had to wake up early because Raimie's school PIBG (Parents' Teacher Association) AGM was held on that day and we had return to our home in Balakong, so we had to add another 20 minutes to our journey to Brickfields.
I'm too lazy to prepare any breakfast so, we headed off to a Mamak place first for a spot of Teh Tarik and roti canai.
Raimie loves his hard boiled eggs
Then he ate some of my roti canai and drank my teh tarik. Kids these days.... Hihihi We got there 15 minutes past 9.00, but the place was not quite full yet even though the meeting was scheduled at 9.00am. Malaysians mah. XD The male teachers were seen standing at the school's entrance greeting parents, while the female teachers sat in a group chatting away. Zaini poring over the AGM papers and he ended up being in as PIBG AJK (PTA Committee) Some of the parents attending the meeting. The turnout was rather dismal compared to last years' attendance and the headmaster did voiced out his disa…
8 comments
Read more
More posts