Titi 100 : The Not Running A Race Edition

Both Zaini and I actually registered for Titi Ultra Marathon, but we decided not to be crazy hardcore like some of you runners out there (heh heh) and slinked out from it when we still had the chance.

When the organiser was looking for volunteer and support crew, I immediately gave our name to be a part of the team. Not running, pass water and fruits to Ultra runners also can la. ;-) 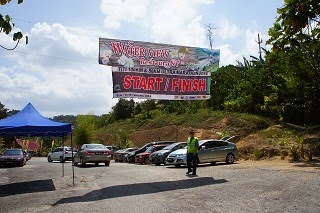 We were stationed at CP4 together with 6 awesomely helpful and chirpy Pengakap and two deadbeat medics. 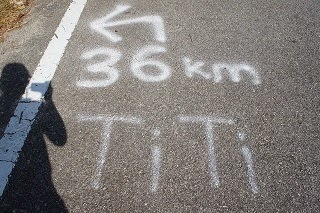 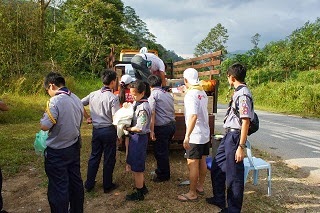 
What's the big deal about carrying heavy stuff, right? At least it didn't involve us running uphill this time. Driving through the route with hubby, I was like "WHOAH! When is this hill ending???"

Salute those running it. Both 50K and 100K. More so those running starting their run under the blistering hot 4pm, ran in rain at one point and finishing like some 18 hours later. 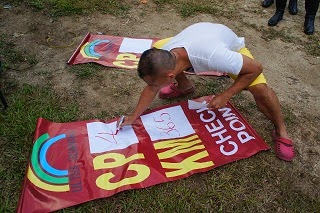 Both hubby and I were at CP4 and CP7. 100K runners need to see us twice Saturday night and Sunday morning. Whether they wanted to or not. ^^

Son helped out too but he decided to ditch us and follow his buddies; Suzie and Arman's kids and helped out CP5.

One photo before work begins.


The first 100K runner arrived at around 7.40pm after the CP got really busy after 8pm. A steady stream of runners came in an hour or so after that; some alone, some in pairs, some in threes. Some runners had some issues and unfortunately I wasn't able to help since I'm clueless about pretty much everything and the medics didn't seem to have anything to help either.  They were actually pretty much unable to do anything other than smoke, eat and drink copius amount of 100-Plus nicked from the CP cooler box, that is.
After the first runner arrival, Zaini shuttled back and forth from CP4 every hour or so to the roundabout about 5K away to check on the two boy scouts stationed there for road marshalling.Can't just leave two kids in the middle of nowhere and forget about them all through the night, can we? 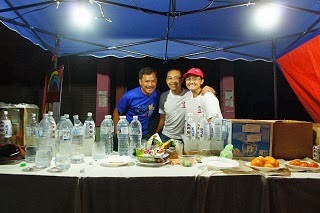 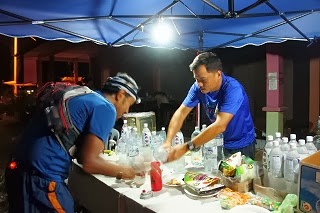 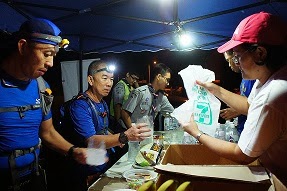 It was really great that Yim who is an accomplised ultra runner accompanied me later. His wealth of experience was shared with runners (and myself too). He took care of those coming in to CP7 after running 63.5K, not only handing out drinks, fruits and food but also dished out advices and giving a bit of pep talk to motivate runners. Plus being stern not to let runners linger too long, if they want to reach the next CP before CP closing time too! Heck! He even gave away some of his stash to needy runners : sprays, ORS, gels...

Yim even drove for kilometres in the middle of the night to scour for some ice for the runners when it was apparent for us that we won't be getting any more ice for our CP. His effort was timely because runners arriving CP7 did ask for ice and that was despite what was being told to us earlier; that runners won't be needing any ice anymore. Thank you Yim! *muaks*

We were supposed to close CP7 at 3.30am and the lorry and bus to pick up the scouts arrived around that time. While the scouts got busy to close the water station, there were still runners arriving to CP7 and we were informed that there were more behind them.

Not wanting to let the runners arrive to an empty CP7 without any fluid repleshisment at the very least, we put aside a few bottles of 100-Plus, mineral water and some fruits and carried it to the junction where they would run before the turn into CP7 proper, and stood by the roadside waiting for them with what little we had.

Some runners arrived later, some still wanted to go on and some had doubts as they seemed to be in pain. It was up to the runners to decide whether to DNF (did not finish) or to continue even after the cut-off time but Yim was on hand to advice the runners on what to expect should they decide to trudge on. Some got us worried as they insisted on continuing on despite injuries.

We were there until 5.30am and left only after the few DNF runners that were being gathered at CP7 were picked-up and a sweeper car drove to CP6 to check on whether there were any more runners still running from CP6 to CP7.

Hubby drove slowly past runners along the route and we tried to scan every runners, just in case someone needed help. Saw a lady friend who was doing the 50K, running strong towards CP9 and we waited for her there to cheer her up (maybe it just annoyed her and slowed her down. I dunno. hahaha)

Saw more familiar faces (or rather, their backside) when we continued our drive back to the finish line. I dunno they noticed me yelling "Go Go Go" as we passed them by. Yell saja la...Hahaha

Don't think Chief Jamie and Cap'n Skechers noticed us passed them too. Either they were too focused on finishing or too zombified already. Heh heh

We got to the Start/Finish spot at around 6.30am. Had thought of waiting and cheering for runners who would be arriving to the finish line but as luck would have it, I got tummy cramps. Really bad one that made me not really keen to move at all. Ugh. Why does it have to come today and at that time???

So after 30minutes, I told hubby I rather be at home instead of being uncomfortable and in pain sitting in the car, at the Start/Finish line.

Friends, sorry we couldn't cheer for you. You guys and gals rocked Titi 50/100K Ultra Marathon! Big congratulations to everyone!

I learn a lot from my experience today. I met a lot of awesome people today. A lot of gracious runners.

I learn that an ultra marathon is not something one decide to join on a whim or because someone you know run one. It's about knowing your limit, pushing it and having the commitment to train for it. Would I try and do it? Maybe. But I definitely would not want to run an ultra marathon because it's the next big craze in running. That I learn today.

50K is not "just add another 8K" to a full marathon. A 100K is not a walk in the park. My deepest awe to all who attempted this.

To the organiser, to the crews, to the volunteers and especially to the runners, thank you for the experience.

Again, to those who ran : CONGRATULATIONS!
Email Post
Labels: Close to my heart Out and About Race Recap