The Coldest Night Run In Malaysia Is Back With CamRun 2020!

A week after my cold, rainy run in Kumamoto, we head up to Cameron Highlands for another cold weather run.

Back for another year,  Camrun is a night run experience at Cameron Highlands. It is not just a race, it's more about enjoying the cold night of illuminating lights with friends and family as witnessed by the crowd at the REPC and race venue.

Cameron Highlands is a great destination for a family holiday and a run there with the family is indeed a nice addition to the family vacation.

We managed to get a room at Century Pines Resort, the event's official hotel with their promo rate of RM258 nett per night. REPC was held at the hotel and the starting line was mere minutes away so it was very convenient to stay there.

One problem though, the room was so nice and comfy, I began to wonder why I should run in the middle of the night instead of just enjoying the soft, comfy bed. LOL

Back to the race.

With such staggered flag-off time, one could be, say, be "tamak haloba" mileage or medal and register to join more than one category. 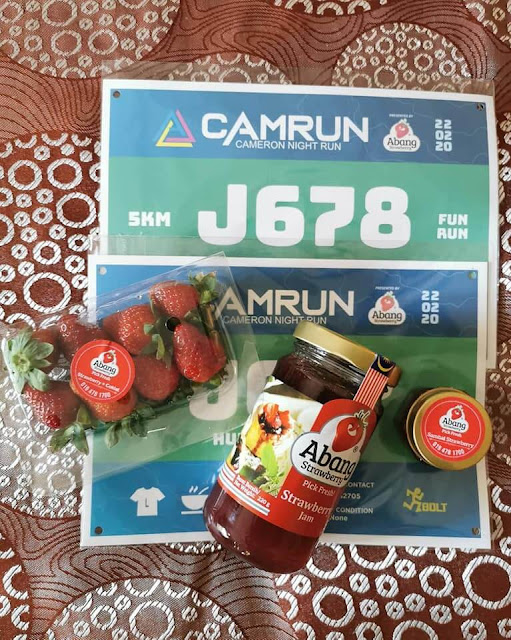 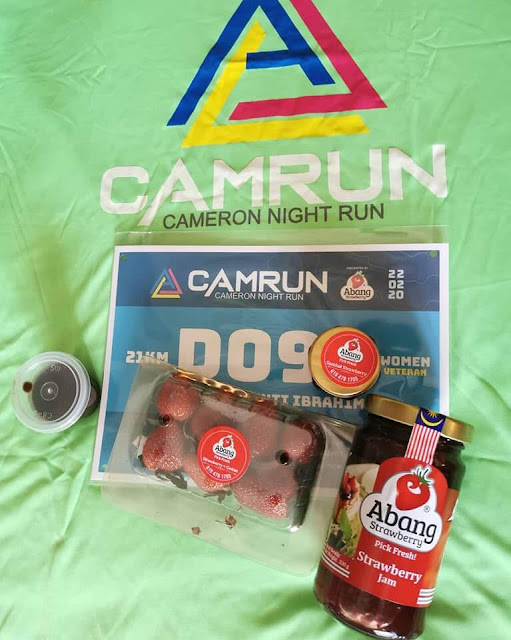 Despite my early reservations about actually running 21K in the hilly course, I did it anyway.

But first, the 5K. It was announced that around 600 runners joined the 5K fun run category and a total of 2,500 participants for all categories.

The race route might not be totally closed-off to traffic, but we felt safe during the run. Cameron Highlands drivers are a considerate lot.

The 21K category was flagged-off one hour after the 5K flag-off, and actually, it was ample time to finish the 5K and then start the 21K. I know some did a combo of 5K + 10K too.

But with 1K total participants for the 21K, I never run alone during the whole route.

It is Cameron Highlands after all, and we saw a number of long inclines (and thankfully many downhills too) so my strategy was simple. Walk the uphill and run the downhill.

I just made sure that my walk never exceeded pace 11 and I shuffled downhill at around 8 min pace. 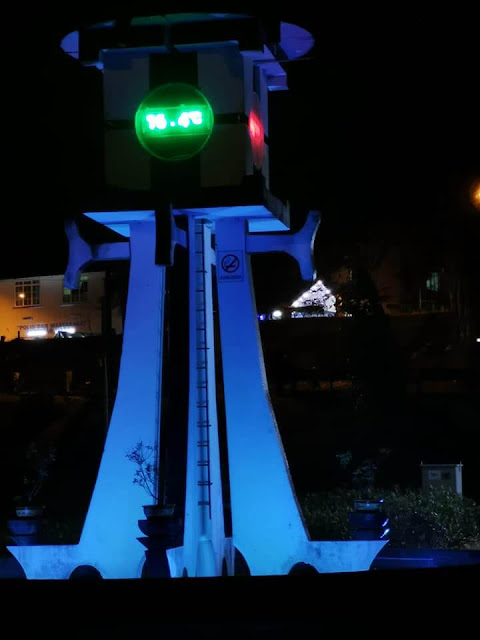 The night was cold and windy with intermittent drizzle, and we started in around 16.4 degrees celcius weather. I wore my trusty Under Armour windbreaker which I also wore in most of my Japan marathons. It was rather nice to run in such cooler weather and enjoy the bracing air.

Runners were required to wear headlamp and bring our own collapsible (they were mandatory items). There were sections where it was rather dark hence having a headlamp is a must. I do like the fact that I had my own cup too.

It was after KM6 when I saw the first runner passed us on the opposite side. We were going downhill at that time, and he was of course running uphill. I went, "oh boy, I have to climb this section afterwards!" 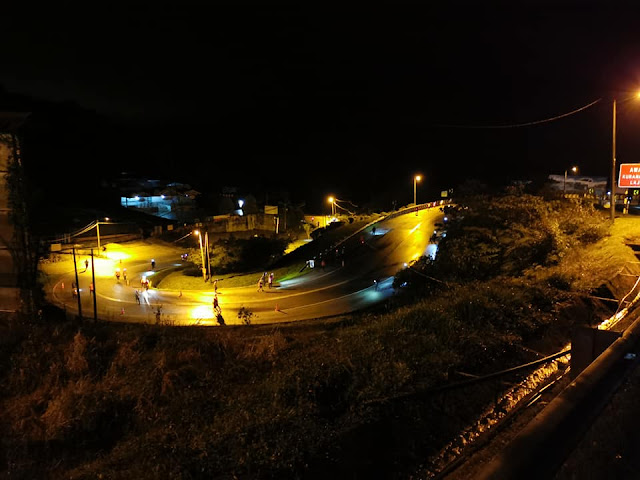 The hairpin turn to get to the halfway mark of our run.

After yet another long climb, we reached the 10.50K mark and made a u-turn. 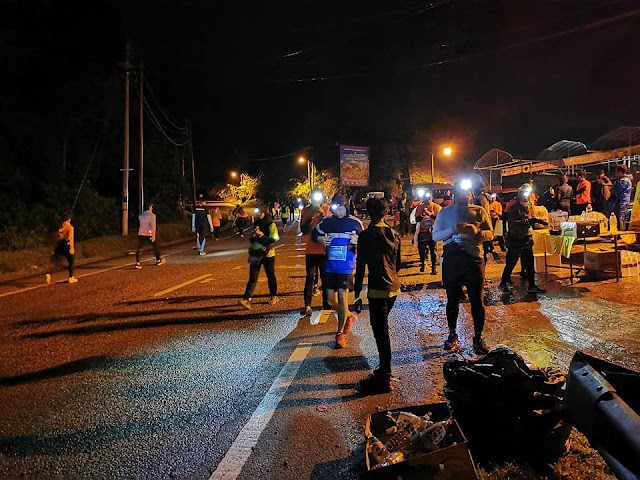 I stopped for a drink (yeah, I stopped at every single water station) and ate half a banana here.

It was at this point that I suddenly had a stomach discomfort, much to my chagrin. It would be a nice long downhill from this point and I had hoped to blitz down but I couldn't run too fast and risk the need to head for an emergency no. 2 toilet stop.

I took a shot of Beet It Sports beetroot juice an hour before my run and thankfully, I didn't feel the need to take any energy gel or sweets at all, apart from the banana from the 10.5K water station.

Legs felt fine, despite my early reservations. Lungs felt OK. Only my tummy was making a bit of problem. Must be the nasi goreng kampung that I ate for dinner at 10pm earlier. Hah!

The undulating route actually made the run more interesting too and there was even a nice "jahat" uphill at KM20 to make the run fun right till the end!

I was hitting a sub8 min pace for the final K, to make it a sub3:10 run (yeah, yeah. I am a slow tortoise) but my cap flew just as I was a few metres to reach the finish line. I had to turn back and chase for my cap because it was a Tokyo Marathon cap!

That cap flew a few times during Kumamoto Marathon too because of the strong wind.

So, I made it to the finish line at 3:11 this time and I was actually quite pleased with it. I didn't feel too tired, I was happy, no bonking during the run, I talked and chatted with fellow runners, I enjoyed running in Cameron Highlands when there were no traffic jam on the street.

They always reminded us runners to keep our headlamps lights on too,

I crossed the finish line, got a bottle of mineral water and strawberry drink, queued for my results to claim my finisher tee and then head to another tent to get biscuits with peanut butter dip. Sedap weh!

After chatting with friends who were on duty at the finish line, I hurried back to the hotel as I really badly needed to go to the toilet and made it just in time. Hehehe

Hubby was sleeping soundly when I got back, so syiok. 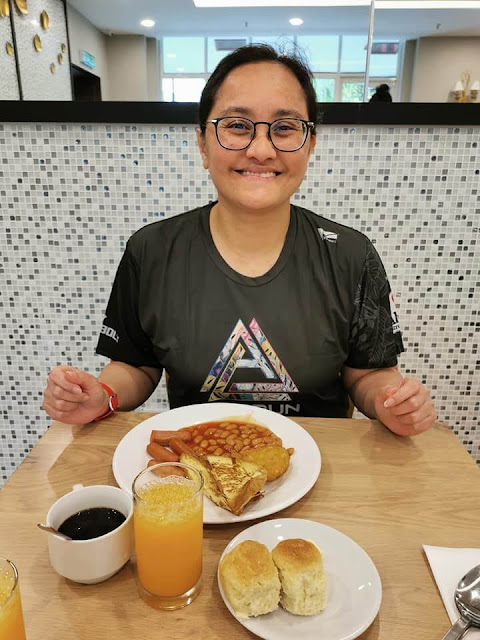 Me and my finisher tee. 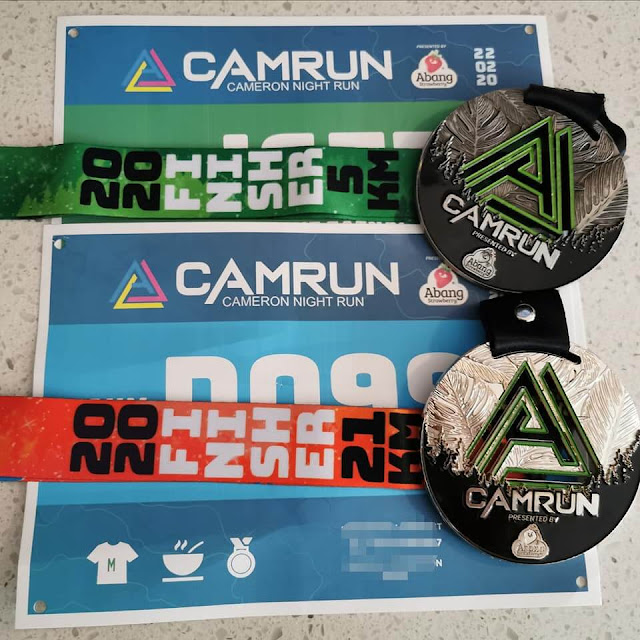 Our 5K and 21K finisher medals.

All in all, it was a great run for me. The route is great for hill training which I rarely get to do. And I get to combine my run with a short getaway too.

So, what's not to like?
Email Post
Labels: Checking-In Close to my heart Events Itchy Feet Out and About Race Recap Review Travel - Pahang