My Public Transport Adventure From Mid Valley To KLCC

I needed to go to KLCC on Tuesday to meet up with RHB's Personal Banker (so grand one lah the name. LOL) because I wanted to refinance my house. So, I thought might as well make an adventure of it. I decided to take a bus from Mid Valley Megamall to KLCC and the trip back by Kelana Jaya Line (forever etched in my mind as Putra LRT). 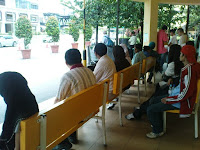 At 2.00pm, not many people waiting at the bus stop. I waited for just 10 minutes for the KLCC bus to arrive.

Bus ticket. This ticket is good for a whole day trip on RapidKL buses. Gone were the days where we pay RM0.90 for a single trip on Intrakota buses or RM0.60 with mini buses. 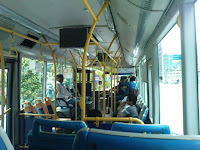 The bus was quite empty. There were 4 of us from Mid Valley stop to KL Sentral and two alighted there leaving just two in the bus. The whole trip took about 40 minutes. 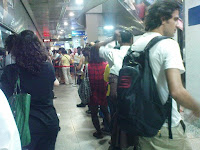 A long queue just to board the LRT at KLCC. 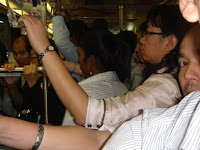 Being squashed inside the train. Total train journey from KLCC to Bangsar station plus a walk home was almost 30 minutes. I am ever so thankful I don't need to commute to work by public transport anymore. Years ago, when I was a regular user of the LRT, the passenger load were not as bad as now. Now, the passengers are increasing but the train coaches never did. Have you seen how long the Japanese trains are?
Email Post
Labels: Out and About Public Transport