A Quiet Dinner For Three

For the long Chinese New Year weekend, we decided to pamper ourselves and make a return visit to Equatorial Hotel in Bangi. We did nothing special, just lazing around the pool and sleeping in for the two nights we were there.
We had however, arranged for a dinner in our room on our first night there, which coincided with Valentine's Day. I was actually looking forward to enjoying food from Kampachi Restaurant but Kampachi and Golden Phoenix Restaurant at the hotel were closed during the holidays. Only Cafe La Vista was open so we didn't have much selection to choose from.
The staff from the Cafe was attentive enough to call me at our room earlier to check on whether we need special arrangement for the night and was nice enough to come up to our room with the a-la carte menu from the cafe and take our orders instead of doing it through the phone.
We arranged to have dinner at 7.30pm and our dinner for the night... 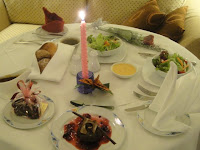 We had wanted to have dinner at the balcony but the table setting was already so nice it'll be a pity to ruin it. We were a bit uncomfortable at having a waiter wait on us during the dinner (he was prepared to, I think) so we chased the two staff out even before they finished setting up the table.
Heck! We ordered so many room service in the past, Zaini know how to set up the table himself by now. LOL 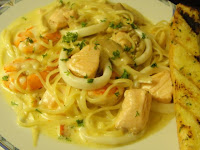 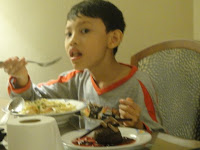 Raimie had Linguini Marina. I would've preferred to order something from the kids menu; Raimie not being a big eater and all, but this hotel doesn't offer a kids' menu. Guess who had to eat the leftovers afterwards? Zaini, of course!
Raimie had to sit apart from us because we wanted to have the table for just the two of us. Two's company and three's a crowd even if they are family! XD 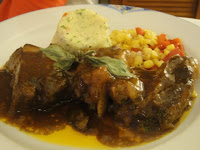 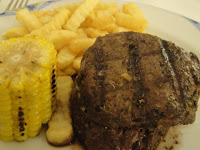 Zaini had smoky ribs and I had a tenderloin. The steak was perfectly done for my taste so no complaints about the meat. However, I was a bit unhappy with the fries. The steak was supposed to be served with a baked potato with sour cream but I got fries instead. I was too lazy to complain because the staff was already so nice to us and all. They even offered to take photos for us but we declined. I don't take photos well with strangers.  I always have this believe that the only nice photos of me were taken by Zaini. ^_^
For desserts, we had 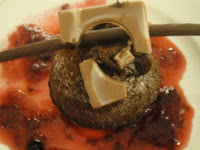 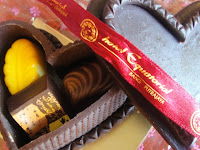 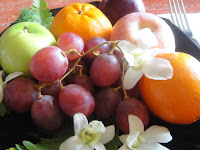 A warm chocolate cake (or something - forgot the name) - (there were strawberries in the photo in the menu but none here - how come?), some chocolates that they brought with a rose for us (which I think was the present to couples celebrating downstairs at Cafe La Vista) and some fruits from the welcome fruits platter that they sent in upon check-in.
No fruit basket for us this time, unlike the last time we checked-in but hey! Who am I to complain, right? I got the room cheap. :D
A very nice, quiet dinner for us made more special by a very nice hotel staff there. Thank you Nurul for taking care of us.


So nice and quiet it was, we had an early night in. We were asleep by 10.00pm.
Email Post
Labels: Celebration and Holidays Close to my heart Makan Time Out and About