We enjoyed a three day weekend from Jan 30 - Feb 1. Monday was day off for us because of the Federal Territory day. Wohoo! And pretty soon, another long weekend because it's Chinese New Year holiday and we'll have a four days off from Feb 14 - Feb 16. Sweet.
Did nothing much but it was a rather enjoyable weekend. I didn't just vegetate in front of my notebook for a change. 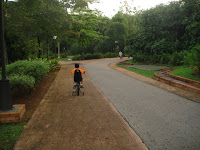 Had an early morning instead of sleeping-in, riding our bicycles in Taman Botani (Botanic Park) in Putrajaya. That was really enjoyable. Raimie already asked us to take off one of his bicycle training wheels. Maybe sometime soon, he won't be needing any training wheels to ride his bike.
I still get worried about him hurting himself. It's a conflicting feeling - not wanting him to get hurt and not wanting to be so protective that he'll grow up afraid to take any risks or hurt.

There weren't many people there at the Botanic Park. Just a couple of joggers and one guy who brought his own bicycle, apart from the workers maintaining the park. 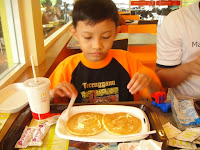 All that hard work cycling around were totally wasted after our breakfast at McDonald's. It was either McD or the Mamak, eating roti canai and drinking teh tarik. Calorie laden breakfast! LOL
Zaini cooked lunch so I got to be lazy and sleep while he was busy in the kitchen. Can't be to lazy for long though because he left all the washing up for me to do. 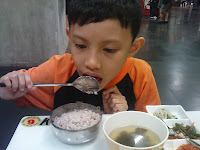 Had a nice Korean meal at Ko Hyang. Ate some nice dishes - spicy squid and bulgogi that the staff recommended and enjoyed them. I bought a new tub of kimchi (we do seem to run out of kimchi faster than we run out of blended chilli boh paste in this household) and got some nice, big juicy but rather expensive Korean pear to enjoy at home.

I have a block of tofu at home yet to be eaten and had thought of making kimchi jigae but then, we ended up cooking/eating other stuff afterwards. We'll definitely have kimchi jigae for lunch this weekend. :p

Which reminds me - I need to buy a tub of gochujang before it runs out of stock at Jusco. That and some Japanese rice. We are running out of Japanese rice at home. My grocery bill can be astronomical at times buying so much imported food. :(
Then, a walk to a nearby park the other day, up on the hill where we buried Raimie's pet turtle then had some ice cream.
We also enjoyed swimming at the apartment's swimming pool. Raimie loves playing in water but until today, we have yet managed to teach him to swim because he is so unwilling to learn (he is too chicken to let go and sink in the water). Maybe I should get him to attend some swimming classes one day.