- May 06, 2012
Just two weeks after the ENR 2012 that was a dismal affair for me, it's time to the Larian Bomba; a run in conjunction of the World/International Firefighter's Day which falls on May 4th.

Instead of going for the Women Veteran category (which unfortunately I already am. hu~) and run 7k, I decided to use this run as a training run. Drill run. Training run means 10K and 10K at the Bomba Run falls under the Women Open category. I'm up against younger girls for the limited 120 medals on offer!

But I decided early on, I'm not going to go all-out, all serious, all technical with this run. Nope. Just going for a happy, happy fun run and made sure I made it early enough to at least get the 120th position. kakaka

Woke up late despite setting the alarm early. I didn't even remember waking up to switch off the alarm! @.@ So got up at 5.40am, and only headed out at 6.20am. We parked nearby the Muzium Kesenian Islam and walked to Dataran Merdeka. As usual, the walk was my warm-up. 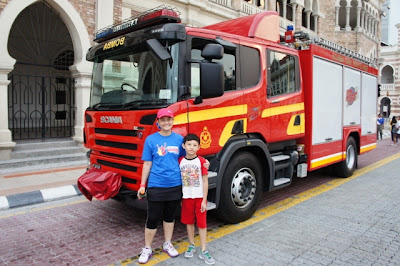 Arriving Dataran Merdeka, first order of business - take lots of photos. So be prepared for a photo overload in this post. 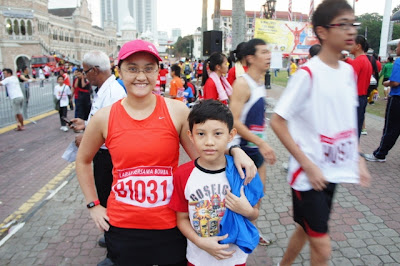 Before entering the corral. Note that I took off my Larian Bomba shirt and wear my orange running vest. I cannot wear baggy shirt for my run. Too uncomfortable! 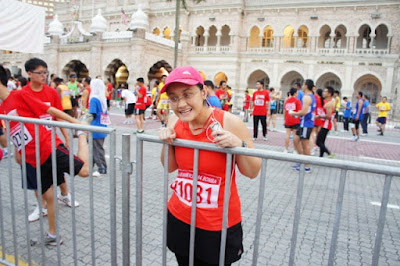 Still got time for playing around - got in the corral 30 minutes before flag-off. No, it wasn't because I wanted to start right in front. I stayed in the middle, mindful that I am not a fast runner to start way up front. 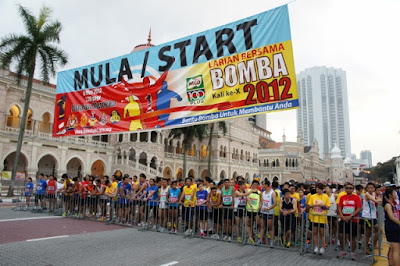 The starting line for category A, B, C 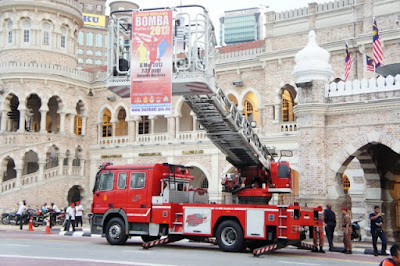 Can't recall who was the Yang Berhormat who went up that crane for our flag-off. Flag-off was on time at 7.30am. 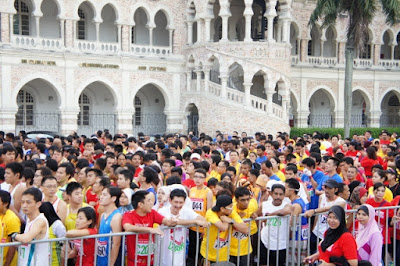 Us runners willingly being shepherded into the corral. The 10K runners in all categories (men open, men jr veteran, women open) 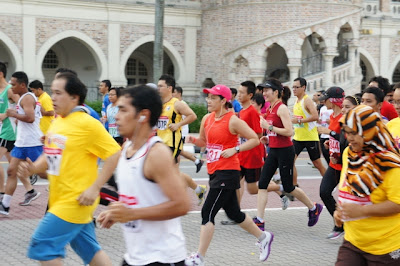 Start! I should've shown a happier face but I was munching a tablet. Waking up late, I didn't have much for a breakfast. Didn't even drink much either. But maybe it was a good thing since I didn't need a toilet pit-stop before the run. But I'll get hungry so I needed that energy tablet to replace the breakfast I missed.

Started off a bit too strong, and faced inclined for the first 3K. Of course, when there is up, there's down too.

As always during a run, I got a tad annoyed at runners who threw their empty bottles into the drain. These runners, who all look like seasoned runners; only care about their health and not the planet's? Come on people, throw them at the water station lah, where there are rubbish bags lying around. Or leave it by the roadside. Don't throw them into the drain! You can be a contributor for the flash flood you know since you are a source of clogged drains and rivers that are full of rubbish! 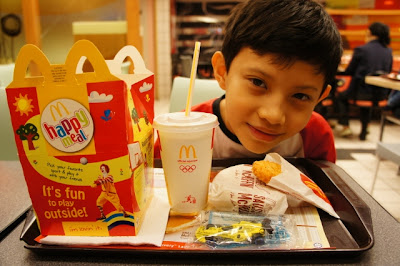 While Mommy went out having fun, Raimie got hungry. Mommy had promised a McD breakfast for him after the run but as he cannot wait, Daddy took him there for his breakfast. 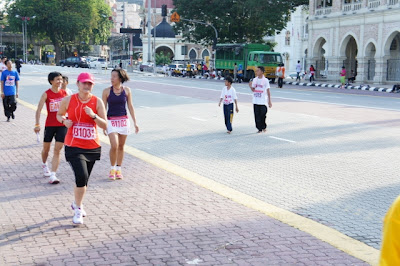 Almost at the finish line. It was well over an hour, and Zaini remarked that he thought I was gonna do a two-hour run for this 10K! Gotta love him for his confidence in me! LOL 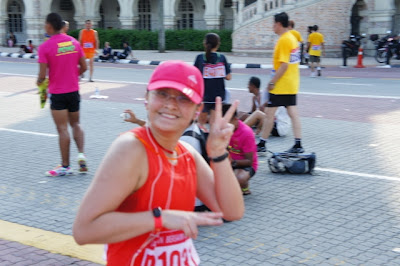 Always, always smile for the camera! Despite wanting to "pangsai" desperately. Hahaha 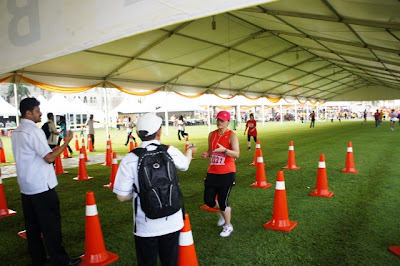 Anyways, got my placing card and then it's off to collect my certificate and medal. Yes! I got one of the limited medals! yeay me! 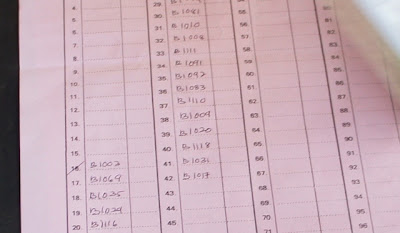 Zaini took a shot of the score-sheet moments after I finished my run. That guy really does understand me because I was lamenting over the fact that I should've borrowed the placing card to take photos with, when I saw him and he had this photo taken already. ^^ 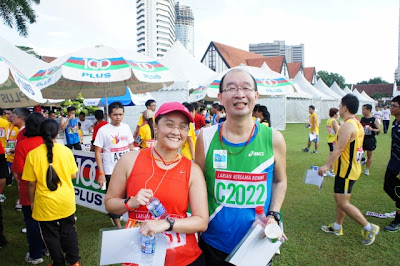 Hollered hello to a fellow Dailymiler at the start of the run and saw him again after the run. Of course a photo op is a must! Nice to see you Kah Yen! You did a great run! 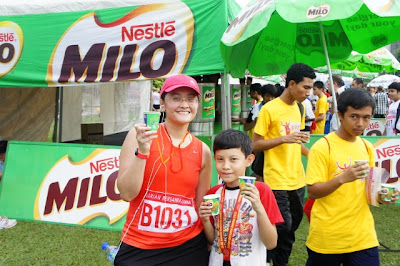 Ignored the 100-Plus booth and made a beeline to the Milo booth. We like Milo! Big cup and all the Milo you can carry and drink. Last time at ENR 2012, Ovaltine was so stingy, gave out itsy-bitsy cups and we had to pour the drinks ourselves. I heart Milo. 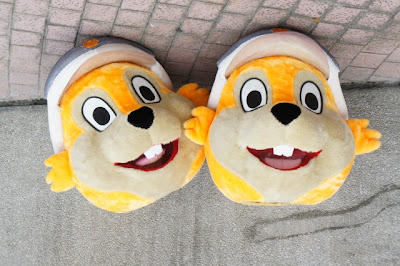 Bomba Mascots on a break 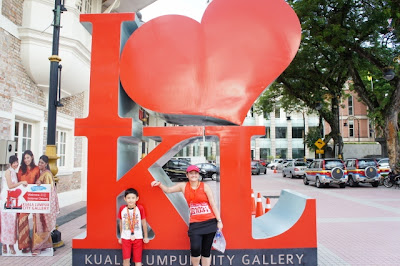 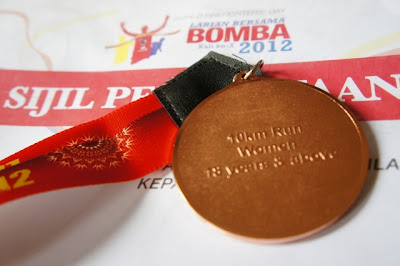 Finally, my cert and my medal. Happy!


All in all, a great run for me today. Yes, it got pretty hot and I got scorched somewhere along the route but I enjoyed it a lot! Yeah, still epic fail on hills. I didn't run all the way, choosing to walk up two inclines towards the end but I don't mind.

The morning sun somehow made me want to bail out the Standard Chartered Fun Run at Putrajaya this May 26th though. It's in Putrajaya, a place where I know will get pretty hot early and that race starts at 8.00am! On the bright side, Putrajaya has a really friendly route.

We'll see how it goes...
Itchy Feet Out and About Race Recap