No updates for the past two days because...well, there's nothing to talk or post about.

Today is extra special though.  Mamarazzi a.k.a Meow over at Small Kucing dropped by just to deliver me some stuff she brought all the way from Kuala Terengganu. So "paiseh" because I accepted all that she brought with empty hands. Later, Raya time I repay my hutang OK Meow? 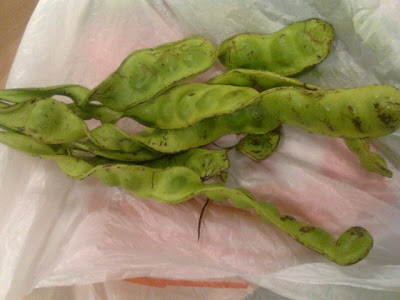 One of the stuff she got for me! What's that folks? Petai la apa lagi... among other stuff she brought along. Got lemang la, got pulut lepa la,got keropok lekor la, keropok keping la even a jar of jeruk salak that I asked her to tumpang buy for me! Cannot show you all the photos, later you all jealous! Bwahaha!!!

When she called me and said she'll be coming, I'm not sure how to find her but when I got to the office lobby, I saw a car parked in front the office tower and saw the anak kucing inside the car! Immediately can recognise itu botak anak kucing! LOL Jangan marah Meow.

Itu anak kucing so cute one! So friendly, bubbly and talkative some more. Even the security guard chatted with the anak kucing. LOL

Anyways, since a lot of people in my office never seen or eat jeruk salak before, I decided to share some with them. There goes half of the jar's content! Share share mah. ;p

With all the good food from her, I'm resting from running tonight. Want to eat and eat and eat. Tomorrow's sahur will be her keropok lekor. Om nom nom

Thank you Meow for all the goodies! She sure is one generous cat. 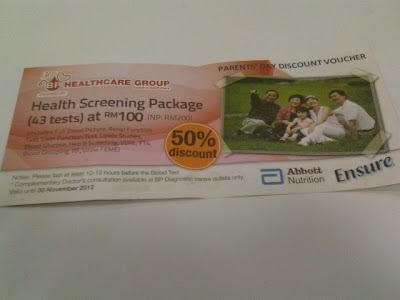 A surprise came through the mail today too. A discount voucher from Wenn. Thanks Wenn for thinking of me. ^^ 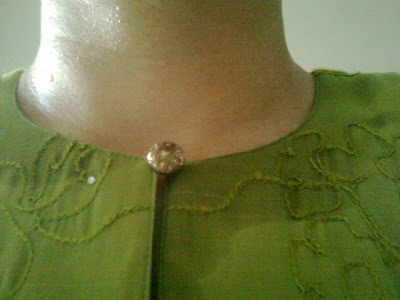 What's this photo about? That's me all sweaty after climbing 15 floor worth of stairs today. With hands laden with stuff Meow gave me and food I bought at Pasar Ramadhan for buka puasa. I go back to FIL's house every day and wait for hubby there and lucky me, just when I had so many stuff with me, the lift there broke down. One was working but then there were so many people waiting for it too!

So me, my high heels, all the plastic bags along with Raimie; walked up today. Normally Raimie had no problem climbing those stairs but with a heavy school bag and fasting to boot, he was exhausted. Poor boy. Despite that, he managed to "tahan" until buka puasa time. Atta boy.

Furthermore, he isn't feeling well today and we dropped by to the clinic to take his flu/cough medicine. 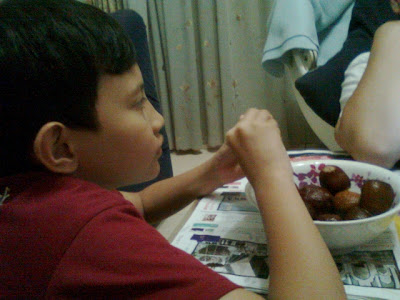 After buka puasa, this boy bugged me for the jeruk salak. So impatient to enjoy them! 3 pieces each. Can't wallop everything in the jar in one day. Must savour slowly. ^^ 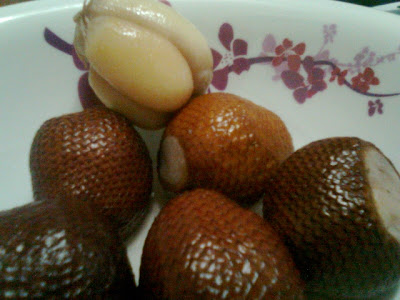 Who loves salak (snake) fruit? We do!

Meow, we LOVE YOU! :)
Email Post
Labels: Close to my heart Makan Time