and I'm nursing a painfully swollen gum for the past 3 days. I think I can bear with other types of pain but gum/tooth pain is hard for me to handle. I've been taking ponstan without much effect these past two days. huhuhu~

Raimie isn't feeling well too. He has a bit of the sniffles and scratchy throat too. Poor boy. But he's game enough not to make it an excuse to not fast. I am so proud of him! ^^

When he whined a bit about fasting being hard, I kept on annoying him (his words, not mine) by telling him the purpose we fast. Plus by asking him to imagine how hard it is for those unable to eat anything because of famine or those in war torn countries. @.@

What is this fasting in the month of Ramadhan anyway?

It's not just about abstaining oneself from eating, drinking or indulging in sexual activities (ahemm ahemm... alamak! throat dry pulak! heh heh); but the month of Ramadhan and fasting is also about spiritual reflection, increased act of devotion - as any forms of worship done this month will be rewarded a few times over; a time when we must refrain from saying sinful & hurtful words and do anything that will hurt (physically or emotionally) and in general to cleanse our soul from impurities and to be better human beings.

(to which I think I rather fail to do, what with my  nonsense done in the blogospehere. @.@)

Raimie of course is not obliged to fast yet, that is not until he reached puberty (or akil baligh), but I do think it is better for him to learn and "practise" it from now on. There wasn't any force for him to do it, but my boy took it upon himself to do it and complete it too. Of course, if he's done it halfway, I would usually coax him to be strong and wait & endure till iftar time to eat. Mommy has her way to gently motivate his son (it involves a certain Nokia phone, by the way) heh heh

Much like his prayer. We never needed to force him to do it. He does it because he knows he should. 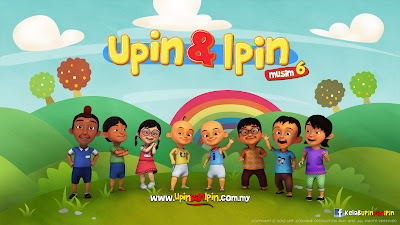 Though I have to admit, these two "budak botak" cartoon series really  is helpful in imparting knowledge about fasting, among other stuff it let children learn.


You know, yesterday I got home a bit early (yeah that day when we walked up 15 floors), and  he has yet done his Asar prayer. It warmed my heart (sejuk hati ibu, us Malay would say) when I saw him doing the prayer "jemaah" style in the surau. My boy is getting so big! He is growing up. *sob sob*
Email Post
Labels: Rants and Ramblings