It was a year ago that I signed up for Putrajaya Night Marathon, doing a 10K. It was the first road-race I signed up, ever.

This time, I did a 21K. Plus, I'm not doing it alone. Hubby was there too. Despite telling me that he doesn't want to start with me, we ran together for a bit. Happy. ^^ 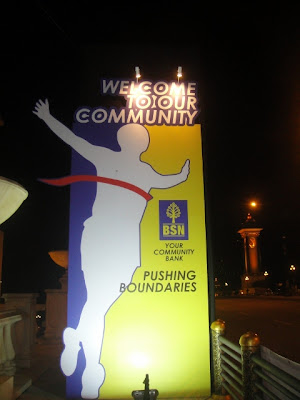 Some points :
We stayed at Pullman Putrajaya for the night and walked to the starting line. Yeah, walked about 3K for warm-up. But we only left the hotel at 7.40pm and by the time we reached the Kementerian Belia & Sukan, it was already 8.00pm and the full marathoners were already flagged-off.

We whooped and hooted and clapped at the full marathoners as they passed us, going the opposite direction. Saw Neoh waving at us and Nick too! 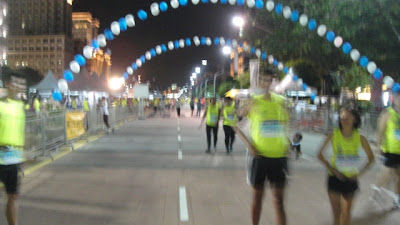 The starting line, when we finally walked towards it.

Almost empty. We finally stepped on the mat at the start 4 minutes after flag-off. Muahaha!!!

Of course, starting waaaaay at the back meant that there were 3,490 other runners in front of us. I ran with Zaini and we took our time. No point zig-zagging and waste energy trying to overtake so many runners. So we ran, we talked, we "kutuk" people. heh heh

The route was incliney... and we took it slow. This was my 3rd half-marathon, and it seems to be just my luck to run all three half-marathons during "the time of the month!". Girls, remember to slather Vaseline or Body Glide or whatever on your nether region. I did, but I still yelped with pain from the chafing on my butt!

Zaini and I parted company afterwards, but not before "gambateh"ing each other.

I make a point to stop at all water stations to make sure I was properly hydrated. Use the sponges too. It wasn't nice to run with my sweat forming into icky salt on my arms so the wet sponges were marvelous.

Sure, this was my slowest half-marathon I did out of three but I don't mind. I had fun. I ran; albeit slowly on all those inclines littered along the route. AND hubby was with me. Not all the way but he was there part of it with me. He started with me and when he was approaching the finish line, I ran alongside him towards the finish line. SUPER HAPPY! 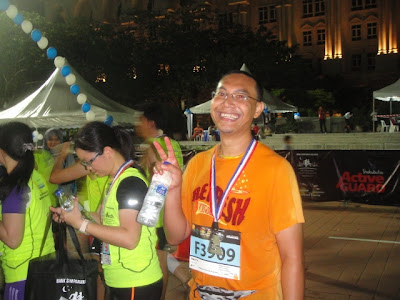 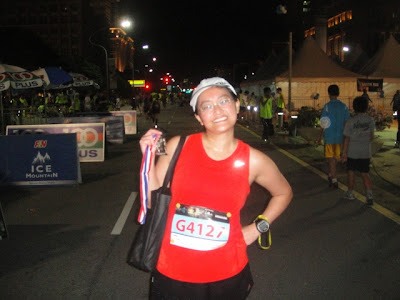 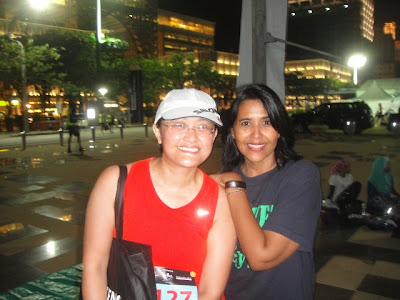 Super happy to be finally meeting Kak June! She was at  about a 100m before the finish line, giving support and encouragement to runners and heard her hollering my name. I ran towards her, we hi-fived, she gave me a hug and kiss, despite being sweaty, stinky and generally icky. I approached the finish line with a bounce in my steps and a big grin. Thank you Kak June! Great to finally meet you. Met with Kak Justiffa there too. ^^ 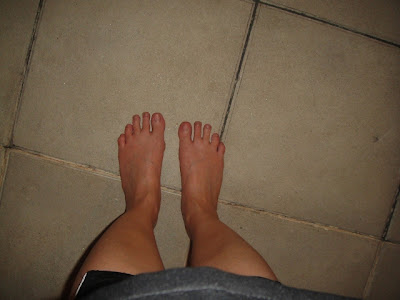 Then, time to head back to our hotel. This is going to be a habit for me, it seems. I really like walking barefooted after doing my long run and I did that night. Walked 3K barefooted. While walking, going the opposite direction from runners approaching the finish line; we clapped, gave thumbs-up and whooped at passing 3hours full marathoners. 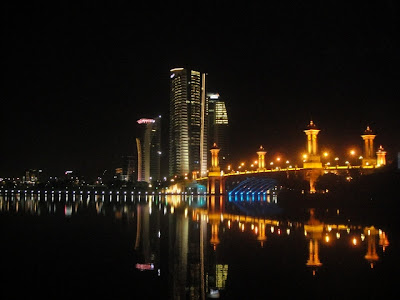 A view of the Seri Gemilang bridge, after we walked pass it to our hotel. ^^

What a great way to spend a Saturday night. :)

But I guess some Putrajaya residents must be so MAD at us runners. The honking and cursing I heard when passing a junction; from some vehicles there made irate KL drivers (when I did SCKLM 2012) seems tame. Bravo Putrajaya residents.