that's my Back 2 Endurance adventure this week.
I somehow had full confidence that I can do 50K and had hoped to do more than that this time around and had hoped that the last minute training I did the past couple of weeks would help carry me for the whole of 12 hours, running and walking. Yes, I definitely planned for a lot of walking. No crawling, please. We do not need to much drama this time! LOL
I've kinda fallen in love with these types of runs.The ones that set time limits instead of a set distance. I am slow, yes. I don't really aim to run that far either. Just as far as what I perceive my fitness level and how I'm feeling allows me to. Call me unadventurous. I don't mind.
Long runs like this allows me to get into my own head. I do a lot of soul searching and sometimes even "arguing" with myself during my long runs. I don't listen to any music anymore and my source of entertainment usually are the runners and supporters around me (love them, I do!) and the voice in my head.
I missed out on last year's inaugural event because it wasn't something I want to do just yet in 2013. This year, YES!

Interestingly, I had way too much fun this time to even have any drama in my head - thanks to my family and also running friends who were there.

Am happy to say I managed to finished in one piece and according to the planned time and distance. Yeay me! 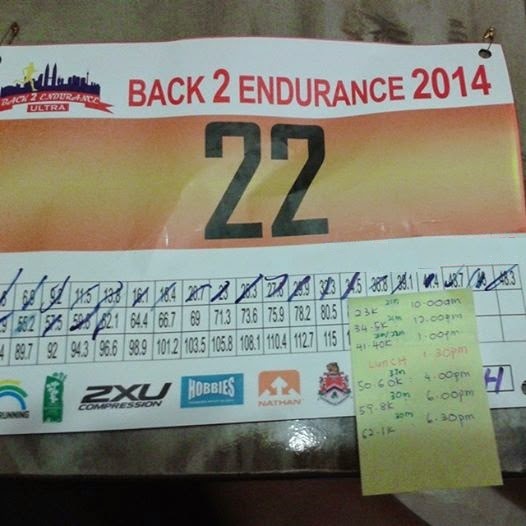 62km in 12 hours. I also managed to cover 50K much faster this time than during Watergate 16-hour by almost an hour! Double yeay!

The format for Back 2 Endurance is easy. Just cover as many 2.3km loops as one can in 12-hours.

I tried to stick to my plan for the run. I aimed to finish the first 41.40km by 1.00pm and take a lunch/toilet/shower break.
I finish later than planned for it though because I had way too much fun at the checkpoint/waterstation provided by both the organiser and also the PACat Team/Le Sabun Group.
Thank you so much!!!

Can't beat this kind of hospitality. ^^

While I was behind schedule for the first 41km, I managed to somehow made up for lost time after my nasi lemak lunch. I had thought that I might need to finish a loop at around 30min after lunch but turned out that I consistently managed to walk (yup, malas to run already so walk lor) at around 22-24min per loop. Compare this to the time I did when I was running, which is at around 18-19min per loop; my walking pace isn't all that bad. :-)

Hubby paced me for a few loops to keep me company and son walked with me during my final loop. Love them, I do. *muaks*

Friends made the continuous looping bearable and the loops went by painlessly for me when I ran a few loops with some of them. Thank you for keeping me company! 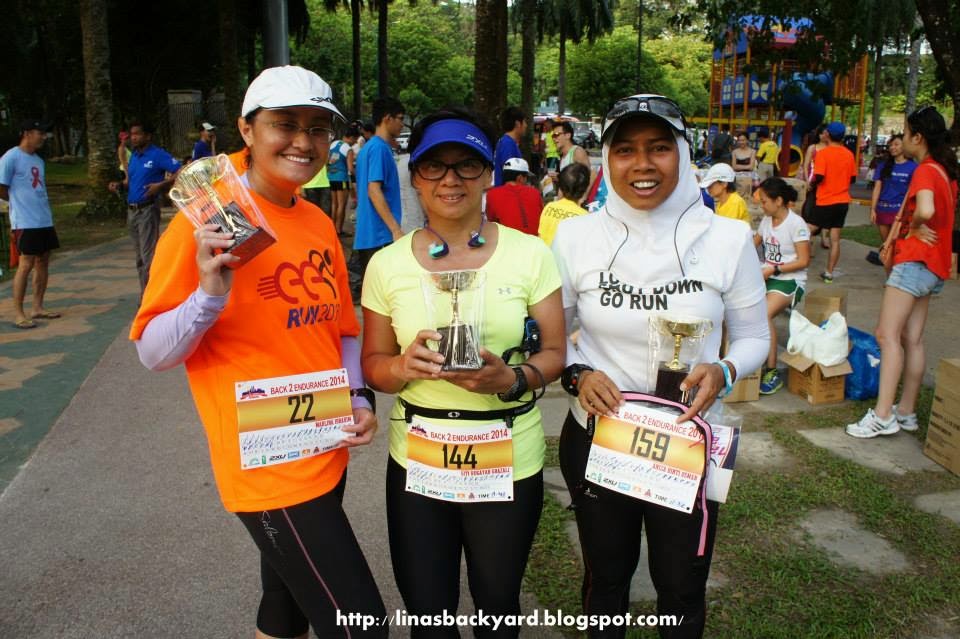 Us ladies made it for the silver trophy. Congrats to Gai and Niza too! We rock! ^^

Again thank you to everyone for a great Sunday out. Race organiser, race volunteers and crew, friends (running or supporting) and especially my family. ESPECIALLY to dear hubby who spent Father's Day being my support crew.

I'll see you all next year. Running/walking faster and aiming to do better. ^^

Now, if you excuse me; gotta go sleep. Tomorrow need to go to work.