I did something that I've been avoiding doing for almost the whole of 2017 and it's traveling outstation for a race.

I did two in December.

I ran in Japan while we were on holiday and did another run in Bentong last week. I'll try to muster a race recap on the Japan run soon (and maybe a few posts on the trip itself). 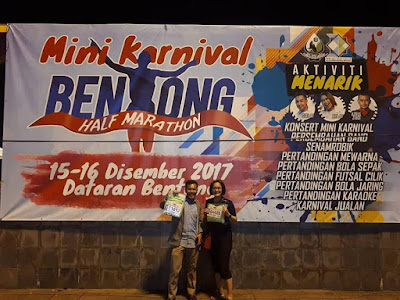 Bentong Half Marathon is a "special case" because it's so near to my hometown which is Raub so I figured I should at least go support the event and it's after PT3 results was announced too.  Plus it had a half marathon category. I probably would've think twice in entering if it's a 10K run only.

The flag-off time for all categories were changed a week before the event because of Muslim runners' request to delay it so that they can do their Subuh prayer without rushing. So from a 6am flag-off, it was changed to 6.45am.

I didn't pay much attention on the route or the elevation and only realised that it would be a hilly route the night before the race and I didn't exactly was training or running after returning from Japan! I took a whole week off from exercising after our return from Japan.

As a matter of fact, I had just started my first week of a 16-week training to prepare for an April's race this week. *die*

So without any plan or target, I just ran (and walked) plus enjoyed the scenery while chit-chatting with fellow runners along the route.

I arrived at the race site in Dataran Bentong at around 6.15am and was impressed when the emcee announced that Dato' Sri Liow Tiong Lai who is Bentong's ADUN and also the Minister of Transport had arrived 15 minutes before the half marathon category was flagged-off. I heard that the YB also joined the 5km category.
When I registered for the run (thanks to the generosity of Majlis Perbandaran Bentong, the event organiser and also Ten Senses, the technical team for the run), there were only Men Open and Women Open category for half marathon. Majlis Perbandaran Bentong was generous to later also added Veteran categories for Men and Women Half Marathon. Nice to note that they increase chances for runners to podium instead of cutting prize money and categories like what some other race organisers did.

Anyhooo... back to the run.

We were flagged-off at 6.45am sharp and I was quite impressed by the number of the half marathon category participants. It was half of the total participants for all categories in Bentong Half Marathon. Quite a lot lah and strong runners were seen too. 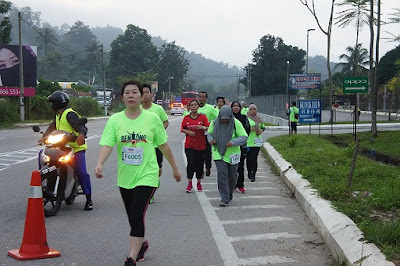 The first 2K was along the main road that leads to Raub. Although it's a busy street, the road was coned off and road marshalls (both event crew and Majlis' staff) ensured runners were running safely.

We then turned left at the junction where the famous Lemang To'Ki is located and ran in kampung. Malay kampung first and later Chinese kampung.

The first water station (WS) was located at around 3.5km mark and was manned by really chirpy volunteers. As a matter of fact, all the WS at Bentong Half Marathon had awesome volunteers who were so proactive and energetic. Good job, peeps! Orang Bentong memang best lah!

We started to converge with 10K runners at around KM5 and that's where the hills started.  I had been running rather steadily up to KM6 but decided to start my walk breaks after that. Wahaha

A friend caught up with me and we started chatting and walking. We'd sometimes ran a bit, then walked a lot, then he go kacau runners, then we do crazy stuff like hitting a 4:30 pace for a bit, then we walked some more, selfies and stuff. All the while, I told him that Hubby probably would be so unimpressed with my goofing off. LOL
Despite the late flag-off at 6.45am, the weather was so nice because we were surrounded by greenery. And we could see mists around us and in the forest. With birds chirping, cocks crowing and the occasional dogs barking, it was a really nice change from running in the city.
The road leading to Chamang waterfall was quite quiet but all along the route, we could still see cones put by the organiser. Distance markers were placed "countdown" style from 3K point.

Only the first WS had lukewarm water served but the rest of the WS served cold mineral water and isotonics. WS at KM9 had bananas served and the one at the u-turn point at Chamang waterfall served apples. A volunteer even helped to rinse the apple before passing it to runners. Heavenlah! And there were mobile toilets placed at the WS! No need to go pee in the bushes. Ooops.
And of course, the highlight of the half marathon for me was running to Chamang Waterfall. Chamang waterfall area is closed during rainy season for safety reason so we were lucky to be allowed to enter the area and view the gushing waterfall. The organiser had put the checkpoint timing mat in a way that all runners had to run close to the waterfall and not miss a view of it. 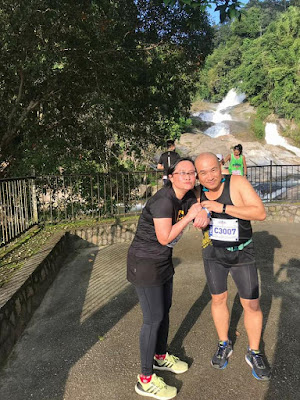 I kinda waited for a few minutes for a friend to reach the spot because I wanted to take photo with the waterfall. I forgot to bring my SPI belt along and I didn't want to run with my handphone placed in my running skirt pocket so I decided to leave my handphone behind. Memang rugilah... 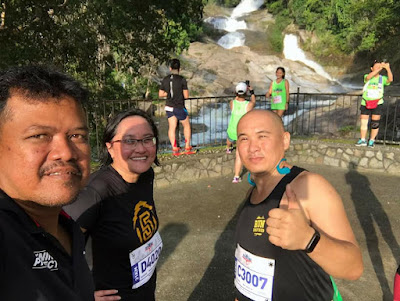 Selfies, wefies a bit, ate apple and it was an uphill attack after the checkpoint and u-turn back to the finish line. Luckily, after about 500m of incline, the route was all downhill and flat.

The weather was still nice and cooling until I reached the lower part and towards the end of the route.

Even for slow runners like me, I could see Majlis' people on motorbikes and also the Penguatkuasa car plying the route and checking on us. Didn't see the Mahamas ambulances though except during the early part of the run. They stayed put at one spot later, I think. (A 71 y.o. runner passed away during the run. Condolences to the family).

Got drama a bit lah,when I had like 6K to go and saw distance marker showed "10K runners, 8K to go". what? 8K to go? Got overdistance kah? Die. Like this sure I finished in more than 3 hours. Huhu

The next distance marker showed 6K and that meant, it was still gonna be overdistance. I did not want to run farther that day and I started feeling grumpy! Hahaha

But then, when I reached the last WS located opposite of the Chinese cemetery before we re-enter the town area, the distance marker showed 2K to go. And it's what my Polar watch showed too. I had reached 19K and supposedly had only 2K to go. Phew. Not overdistance after all.

And what relief to see the distance marker at the junction showing 1K to go. And the last distance marker showing 200m to go. The whole route ended up to be a bit underdistance after all. Not over.

Hubby was waiting about 150m from the finish line and was taking photos. He told me to hurry up and finish the run.

Since I was slow, I couldn't see any crew members or volunteers waiting at the finish line and runners were crowding the Finish Line arch  and taking photos so I kinda wasn't sure whether I had exceeded COT although I didn't think they'd put a sub3hr COT for this race. 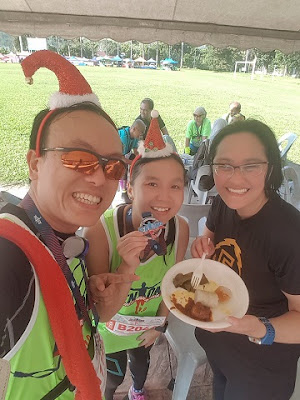 It was a nice run and the venue is not that far from KL so traveling to run in it wasn't a pain. 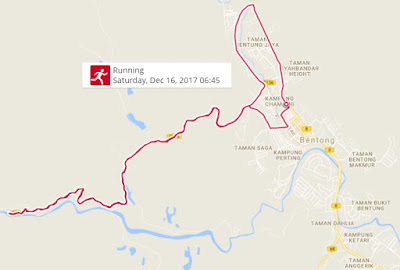 I hope there will be Bentong Half Marathon 2.0 in 2018. And organiser definitely should hold it again during durian season. Hahaha

Some photos taken at Bentong Half Marathon can be viewed at Cik Arnab & En Kura-Kura Facebook page. Do LIKE and FOLLOW us for more race updates.
Email Post
Labels: Close to my heart Events Itchy Feet Race Recap Travel - Pahang Vacation