PT3 results was announced last Thursday, and of course Son had already collected his results early on. He was quite nonchalant about it and the school; following NTUP directive on not celebrating top scorers at the school had no special ceremony on the day the results came out. 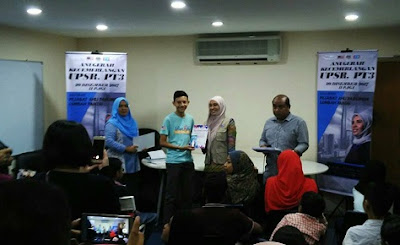 So we were quite surprised when Son informed us that one of his school teacher had asked for his parents' phone number. And more surprised when we received a call from MP Lembah Pantai office later that night.

There was a small ceremony held at Lembah Pantai MP office to celebrate the achievements of top scorers in UPSR and PT3 for students in Lembah Pantai.

Son was one of them!

And of course, YB Nurul Izzah was there to hand out the award and a small token for each students.
Email Post
Labels: Close to my heart Events