Going the Distance Together, Two Tutu At A Time

Hi Jin & Jian,
First of all, congrats on your 1st 100K ultramarathon at Kuching Ultra! You guys actually did a B2B ultra, with a 50K at Langkawi Ultra and then then 100K in Kuching the following week.
(Jian) Ohhh yea wo, we didn’t notice that hahaha! Actually the 50K Langkawi Ultra was a last minute impromptu event to (sort of) celebrate Jin’s birthday which coincidentally falls on a day before event day (28th February) so yeah, it’s quite a memorable one.

Secondly, thank you so much for agreeing to answer some of our Q&A.
(Both) You’re welcome! We should thank you too for giving us the chance to be featured again in your site.

1. Let’ start with a little bit of yourself.
Can you two tell us about yourself?
(Jin) Hi everyone, my name is Jin. I work as a banker and my passion is running, which also provides me the avenue to relax and chill during my leisure time.
(Jian) Hey everyone, this is Jian. Accounts Executive by day, runner by heart. I used to hate running very, very much but like what most people say, you will never know where your heart leads to, and now I love running. And it is running that leads me to my wife – which I am forever grateful.

(Jian) 7 years, the initial 1 year or so I was cursing myself daily on why am I doing this, hahaha.

3. Did you start running individually before you were known as a couple runner or have you two always been running together?
(Jin) Running individually. I used to have some friends who run and join events together but due to life commitments, all of them have “retired”.

(Jian) Running individually too. My case is quite similar as Jin, however I am slightly lucky as I still have some runner friends who runs up to today. My best running partner and companion is still with Jin, as we run together for eternity =)
Note: Awwwwwww... so schweet.

4. Who motivates who in running?
(Jin) I am very much self-motivated – until I met this enthusiastic uncle-looking guy whom I enjoy running together with (ehh jangan marah yer, Jian). Of course there are my other running friends and photographers (you are one of them, Cik Arnab & En Kura-Kura!!) who drives me to run longer and harder.

(Jian) I am motivated by my wife – Jin ! Last time I used to pace her, nowadays she is the one who pace me (and sometimes abandon me for podium, but I don’t blame her awww). But seriously, Jin is my main motivator – she is a very, very consistent pace runner who aims for nothing but finishing within Cut-Off Time/COT, hahahaha!!

(Jian) Her !! We even created a special term for this – it’s called the JIN DECIDER ! More “racun” than walking in to “tempat berhantu” Decalthon, HAHAHAH!!

6. If we remember correctly, we first bumped into you two at Hulu Langat Marathon 2017. You two were wearing purple tutus.
When did you first start donning tutus in your run and is there a reason behind it?
(Jin) 1st time during SCKLM 2017. Reason wise - easier to find photos! Sneaky right? Hahaha. Truthfully speaking, it is crazy to look for photos of events as huge as SCKLM, so I thought of why not dressing up a lil’ to distinguish myself from other runners? What started off as simple cap wearing ended up as wearing tutu’s! Moreover it’s light, cute and doesn’t affect my running, hehe.

(Jian) Wow Lina, you really have superb photographic memory, hahaha! I still remember that time during Hulu Langat 2017, both me and Jin was wondering “ehh how come got people driving and taking photos de? Faster pose!” Anyway my first time donning tutu was the same as Jin. What makes it striking and hilarious is an uncle-looking dude wearing tutu while running events, hehe! My event photos are even easier to search than Jin’s!

7. How many tutus do you two own and where do you usually buy them from?
(Jin) Hmm, around 10? Bought them online from LAZADA/SHOPEE/SUMMERSAULT RUNNING COSTUME (thanks Lily!) Everytime I’ll buy a pair of tutu, one for myself and another for Jian, hehe.

(Jian) I’m the same as Jin coz she is my tutu supplier, heh! But there was one particular time I bought tutu from Mr DIY (due to last minute idea) though. And that one came with “wings” too since it’s a Halloween theme, so cute hahaha!

8. What other costumes and fun get-up do you also wear during races?
(Jin) Hairband.
(Jian) Hairband, the “wing” thing, and several semi-onesie (half body-only top part) I bought from Bangkok. Don’t play play, one of these semi-onesie won me 2nd place at Atria Fun Run 2 years ago, haha!
Note: So popular go to Bangkok, people there interview this couple summore.

9. You two join all sorts of races, from fun runs to ultramarathons.
How do you decide on what race to join?
(Jin) New runs, nice finisher tee and sometimes running friend (Lina included, haha) “racun”.
(Jian) When Jin jump, I jump. Explains it all, hahaha! But yea, like what Jin said, we give priority to new or yet to join events.

11. From all the races you had joined, can you share which are the memorable ones and why? Don’t worry, you can list as many races as you want.
(Jin) Nagoya Women Marathon, Japan – My current Full Marathon/FM PB with timing 5 hours 25 minutes. Have to thank the tight Japanese-standard CP’s & COT for it.
Balik Pulau Marathon, Penang - 1st time masuk ambulance and admitted to hospital due to heat stroke. It’s my bad coz I was not feeling well and having fever a day before but I insisted to start, and dragged Jian together to DNF, adui.
Kuching Ultra 2020, Sarawak – My virgin 100km ultramarathon finish. From dream to reality, yeah!

(Jian)
NM Galaxy Half Marathon 4th Series 2014, Putrajaya – My first ever Half Marathon was ruined by an “infamous” organizer with no medal & low quality finisher t.
Twincity Marathon 2017, Putrajaya/Cyberjaya – My current (and still) Full Marathon/FM PB with timing 4 hours 47 minutes. Despite a sub 5 FM finish, I regretted for missing the chance of trying “Nasi Lemak Anak Dara” (no more next year already)
Kuching Ultra 2020, Sarawak – Virgin 100km ultramarathon finish, baby! Longest distance and completion time, and we did it!!

12. Can you also share with us the races you have “ter”podium?
(Jin)
CICM Responsibility Run 2018 (HM-4th placing) 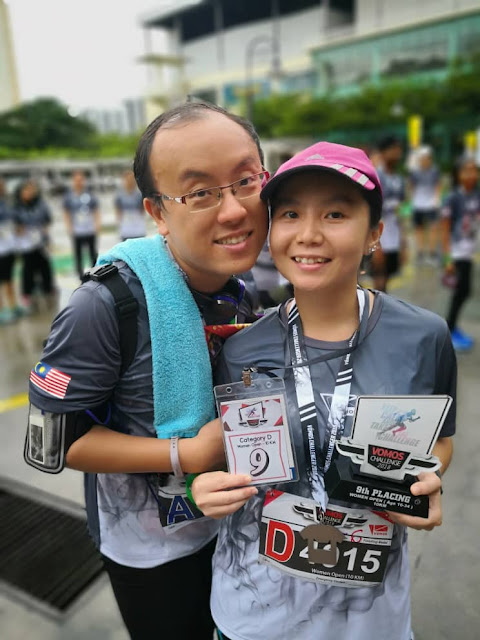 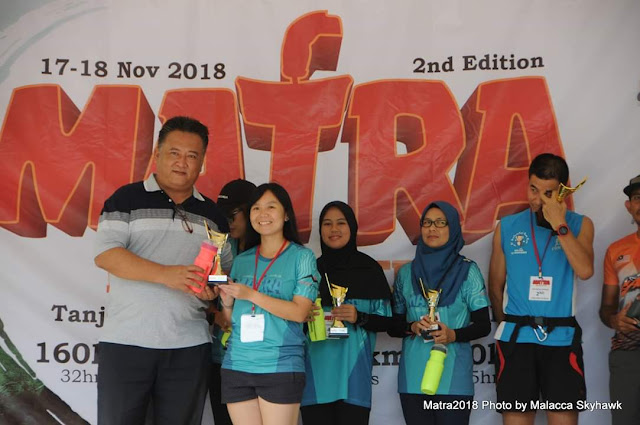 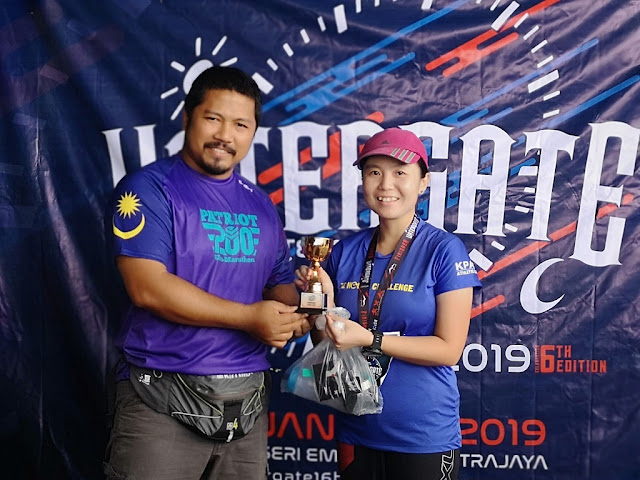 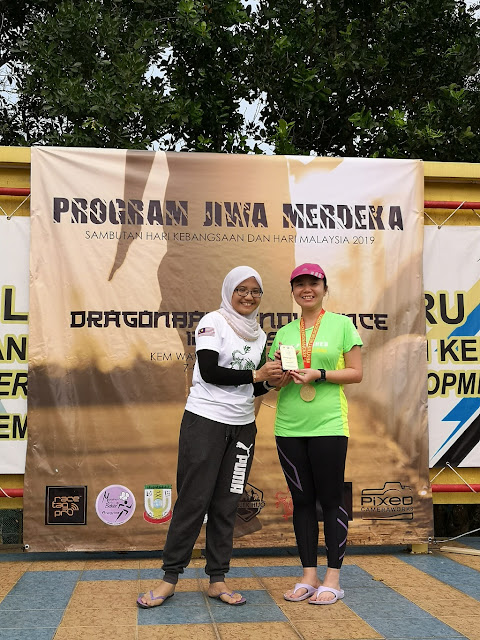 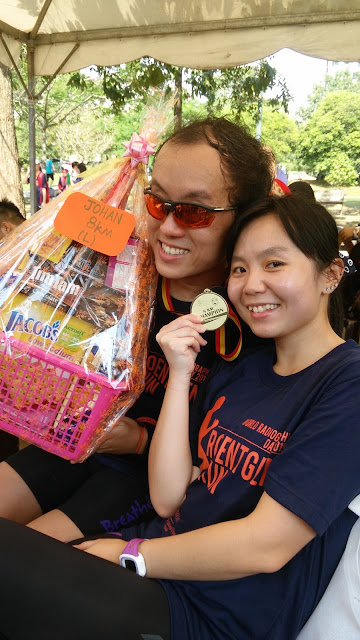 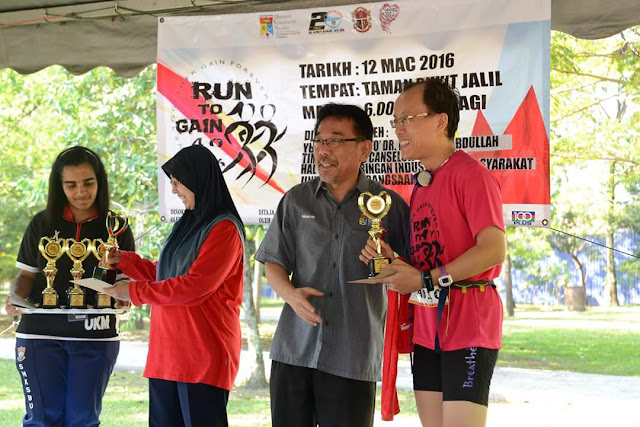 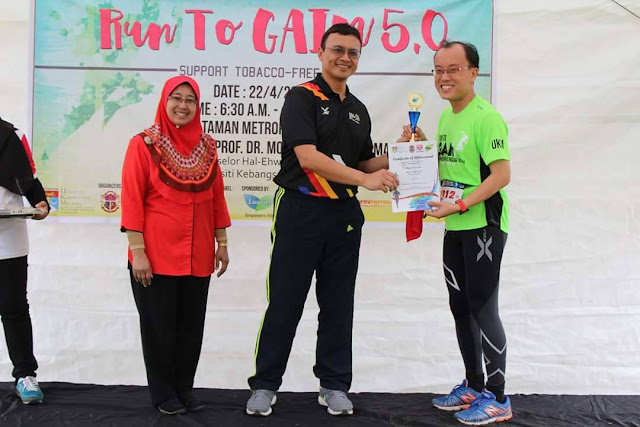 Note: So many times podium, how can it be "ter"podium ah? :P

13. Emotions can run high and we can get slightly disconcerted while dealing through a tough patch in a race.
Do you ever bicker or argue while finishing your race together?
Who is the more level-headed or peacemaker between you two?
(Jin) I never argue, hahaha. More like this uncle like to complain so much on why I keep running non-stop during the run! He doesn’t understand I’m always (and forever) chasing for CP/Cut-off Time. I’m motivated by COT!
(Jian) We never bicker or argue during races. Jin is more of the peaceful runner, while I am more of the drama-king/emo-king/name-it-I-have-it kind of runner. So she have to deal with this emo guy keep complaining and making noise on why does she have to consistently run non-stop to chase for CP/COT when there is still so much time available. Nevertheless, all drama comes to an end once we hit the Finishing Line, hehe.

14. Do you have any advice for couples out there who want to start running in races together?
(Jin) To inform upfront before the race what to expect. Be prepared to listen to all the nags/complains throughout the run and choose to ignore it. Nothing else matters besides finishing the race within COT. COT IS GOD!

(Jian) Be honest and know your own limits. Guys, there is no shame or men ego overload when your partner overtakes you or takes the head up in front of you during races. Most importantly, finish the race legally, do not take shortcuts or cheat, finish strong, take good care of yourself to avoid further injuries. Running alone is an achievement, running together is the ultimate bliss.
15. Do you have any advice for those who are thinking to start running and joining races?

(Jin) Never be afraid to try something new. Who knows running might be your next passion in life.

(Jian) Failure is temporary, glory is forever. Taking the first step out of your home for a run, starting off a race or even deciding to DNF/not finish a race due to self-assessed judgement, it is all part and parcel of life. Embrace it, and be a better version of yourself.

16. The COVID-19 pandemic has put a halt to races with many either cancelled or postponed, but what are the races that you’ll hopefully be joining for the year?
(Jin) Yearly KLSCM 2020. First it was about haze, now it is about a virus pandemic. We respect the final decision of the organizer nevertheless.

(Jian) I was hoping to join Taman Jaya Ultra in early May, but I guess it will most probably be postponed/cancelled. Reason being this race is so, so close to my home! Hahaha.

(Jian) Yup it’s Gold Coast Marathon this year at Aussie. We are doing a run-cation during our honeymoon, hahaha! Let’s all hope the pandemic will be over soon by then.

18. What do you hope to see in future races organised in Malaysia?
(Jin) Longer COT, cheaper registration fees! Hahaha.

Lastly, your big day is coming up soon. Congrats and may you have a blessed and blissful marriage.
(Both) Thank you very much, Lina! Cheers to more races to come!
Email Post
Labels: Interview