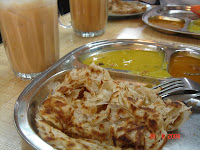 Roti Canai, as known by the locals or paratha. It is a flatbread, originated from India. Actually, this roti is eaten at all hours of the day here. In fact it is served and available 24 hours at a Mamak restaurant!

We love going to the Mamak restaurant and have some roti canai for breafast after our jog during the weekend. (Talk about burning off the fat and adding some more immediately after! Hehehe)

The ingrdients for a roti canai are essentially flour, salt, sugar, margarine, egg, milk, water and heaps of oil or ghee for greasing and cooking.

Coupled with a glass of teh tarik, it is a heavenly breakfast, even if laden with cholesterol! Hahaha. Life is short - might as well enjoy it.
Email Post
Labels: Makan Time