Another wheeled-inspired post, after last week's "Two Wheels". This is also inspired by my post titled "Oke" over at my Japan-centric blog.

Lanca is malay word rickshaws. The pulled by human type. The cyle-type ones are called "beca" in Malaysia "Lanca" is the predecessor of "beca" if I'm not wrong. Right? And I guess Thailand's tuk-tuk came after rickshaw. No?

Nowadays, this mode of transport is catered for tourists nowadays. But in the East Coast of Malaysia, it is still used by the locals - mostly older folks transporting goods to/fro market. 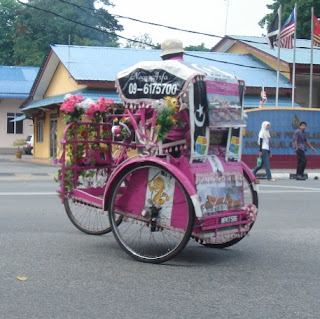 A very pink rickshaw plying the Pasar Payang route in Kuala Terengganu. Similar-decked rickshaws can be found at popular tourists spots in Malacca and Penang.
The Pasar Payang rickshaws that are used by local folks ferry passengers from the Pasar Payang market to the bus station nearby. Those that cater for local market are usually not decorated like that pink one above.
Anyways, I have not been riding one for ages. I think the last time I took a "beca" ride was with my late grandmother in Kuantan when I was 10. The ride cost us less than RM1.00 and my late grandmother grumbled about it being too expensive! 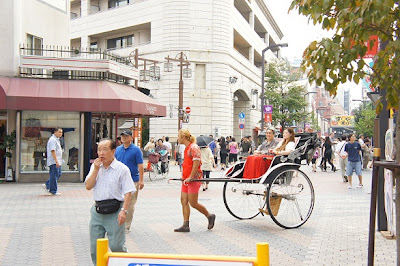 And this, a "lanca" or in Japanese "jinriksha" which means human powered vehicle found in Asakusa. Found a pedicab type "rickshaw" in Yokohama. ^^ Cost a fortune (well, for me anyway) to ride one.
Have you watched the movie Penarik Beca? That's an award winning film by the late Tan Sri P Ramlee, and was the first movie that he directed.
Email Post
Labels: Rants and Ramblings