- February 07, 2012
Tuesday. Last day of the 4-day weekend we are enjoying because of Maulud Nabi and Thaipusam holiday.
We didn't go anywhere and plan a trip. Didn't go back to my hometown either, just relaxing at home and being totally lazy.
So what did my 9-year old was up to during the holiday? Nothing much but he kept himself busy with:
Indoor activities 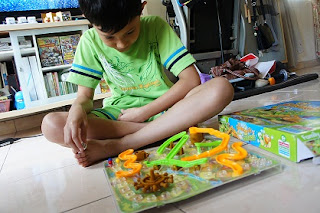 Playing board games. I got coerced into playing snakes & ladders with him. This is the 3D version. As usual when playing games with that boy of mine, there would be a little bit of argument while playing. All for fun though. 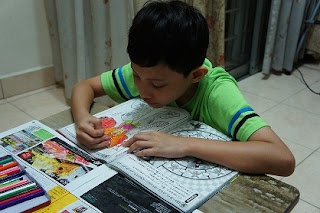 He spent time colouring too - not any old thing. He likes colouring super heroes. He's a boy, after all. That's Go Onjer that he was colouring. 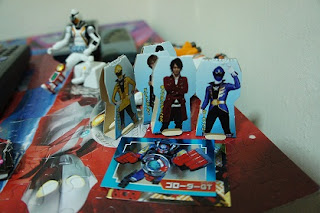 And playing with his toy and games collection - that's the Gokaijers he got there, and Kamen Rider Fourze figures at the back. And oh! An Ultraman jigsaw puzzle too. Plenty of things to keep him occupied at home and not get bored even when being cooped inside. Pity reading is not high in his fun thing to do, though.
Then of course, he keeps himself occupied staring at his netbook screen and being online. 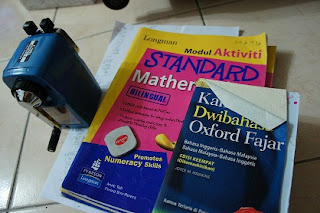 After having fun playing, it's time to sit down and study too! On weekends, we set 4.00pm onwards (until he finished everything that I told him to study/do) for study time. There's an ulterior motive setting it at 4.00pm. It's Mommy's time to control the remote. There are Korean shows that Mommy like at that time on Saturday and Sunday and when Son is studying, Mommy gets to watch TV without interruption. 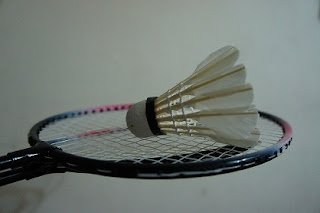 Played a bit of badminton with him at the apartment's playground. He totally dissed my badminton playing skill. Huhuhu
He's a bit self-conscious playing badminton at the playground and he wanted to stopped when a few kids came to play there. Regardless, I'm just happy he wants to be out of the house. 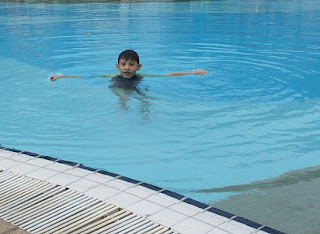 He had a swim too (OK, make it two swims). I don't really like swimming so when it comes to visiting the pool, Raimie goes with his Daddy. But that said, after a run under the hot sun, a dip in the pool is sure nice. And it's a good way to cross-train. ^^

Then, it's time to go cycling. The initial plan was to go on Sunday. I actually changed my planned 13K run on Sunday earlier and did it on Friday to clear Sunday for Son. But turns out everyone woke up late on Sunday! So turns out Tuesday cycling it was, after I did my scheduled 10K run.

What is not high on our list of activities during weekends? Hitting the malls. Oh! I really do hate going to malls on weekends. Mall crowds gives me a headache.

Back to work tomorrow and no more public holidays until May! Ugh.
Celebration and Holidays Close to my heart Out and About