Well, I followed Hubby with his gang on Saturday morning for a trail run. We woke up bright and very early (as SK can attest to, LOL), send Son to school first; as he had a Saturday extra classes in preparation for UPSR and then only proceeded to make our way to the RV point.


28K of 14K ascent and another 14K descent and we were done by 3.00pm, hiking for 7 hours. The 7 hours included an obligatory pit stop to eat Nasi Lemak, of course! Hihihi

Rested and waited for the others who did a farther hike to regroup, enjoyed Maggi served at a stall and Teh Ais along with some "mata kucing" before making a move home.

We didn't linger long because we needed to get ready for another run and this time, it's Energizer Night Race which was held at Dataran Merdeka with the 15K starting off at 8.00pm.

The road was jammed yesterday so it took us a while to get to my FIL's house to shower and fetch Son. We didn't have any time to rest there so it was arrive, shower, get ready, drive to Bangsar LRT where we parked our car, had a light dinner before taking the LRT to Masjid Jamek station. Met a fellow runner who was having his dinner there too! :-)
Dataran Merdeka was a hive of activity. Energizer Night Race certainly had no expenses spared to keep runners entertained and also provide amenities to us runners.
I started way at the back and walked about 100m to reach the timing mat after the gun off, taking 2minutes to do so. Yeah yeah, very anal of me to state this. Hehehe

The crowd was so big, the start was slow as many were just walking, talking, looking for GF/BF to hold hands, pose for photogs etc. It turned into a standstill reach the tunnel in front of Dayabumi and continued to be so for about 700m. 700m of shuffling.Woohooo...

So decided to have it easy first and even chatted with a couple of runner friends while we were on the move.

Would've thought the crowd would disperse accordingly after the tunnel as we're running towards Jalan Kuching but there was way too many walkers and way too many runners who didn't seem to care about bumping into other runners as they weaved through, probably as they were chasing for that podium placing. *snort*

My first 3K was a slow 26min, then picked up a  bit for another 3K at 25min then slow again at 26min as I looked for water at KM6.5 water station. Horror upon horror, the water station ran out of water!!!

I could probably lasted another 3K without water but the thought of the possibility of the next water station running out of water made me felt down.

Credit to the volunteers, they were still "keep up the good job. There are more water at the next water station" and I was like a grumpy monkey and told one of them "no thank you. No mood to run already". Huhuhu Sorry adik. Akak was grumpy sikit that time.

A fella offered a half-full 1.5ltr of mineral water as I bumped into a runner and a gulp of water completely changed my mood. Bid adieu to the lady and started off for a trot again. How a sip of water can absolutely can my mood. What la...

The next 3K split were 24min then 23min. Faster a bit lah compared to the first 9K. Helped by the many downhills we experienced.

Bumped into another runner (who is a Race Director for a big race in Malaysia) and said hi before taking off. He actually followed my pace and told me that I'd be his pacer. Hahaha. Yeah, until we reach the flat route at the roundabout near Bank Negara. I told him I plan to run slow there and he went ahead.

I hadn't hope for a fast finish but as I progressed along, I thought that it'll be good if I can make it in 2hour 08min. I finished a bit slower than that but it's OK.

There were shortcomings in the race but overall I did enjoy myself. That's what matters to me. ^^

Some point forms :
The Not-So-Good
The nice and novelty
Rants and grumbles
Wah... this auntie so angry pulak. MUAHAHA

But no lah. Despite its shortcomings (which I hope the organiser take note off and get the technical race director to take note of the shortcomings and weaknesses), I had a fun night. A fun, sweaty night. I sweat more while being stuck in the tunnel than running for 2 hours. Hohoho

Of course I also should have been prepared for the items that I ranted above when I entered any big name races. Especially one that is the biggest night race in KL. Kan?

Oh yeah, while I was out "enjoying" my 15K run, Hubby and Son ran 5K that night. *clap clap*
Took the LRT to Bangsar Station where we parked our car then off we went home.

I was still pretty much energized and my feet was feeling OK that night even after doing an accumulative 43K in one day (28K in the morning and 15K that night) but I made myself sleep at 2am as both Hubby and I needed to wake up early to go to the AK Balloon 5K Run at Avenue K. 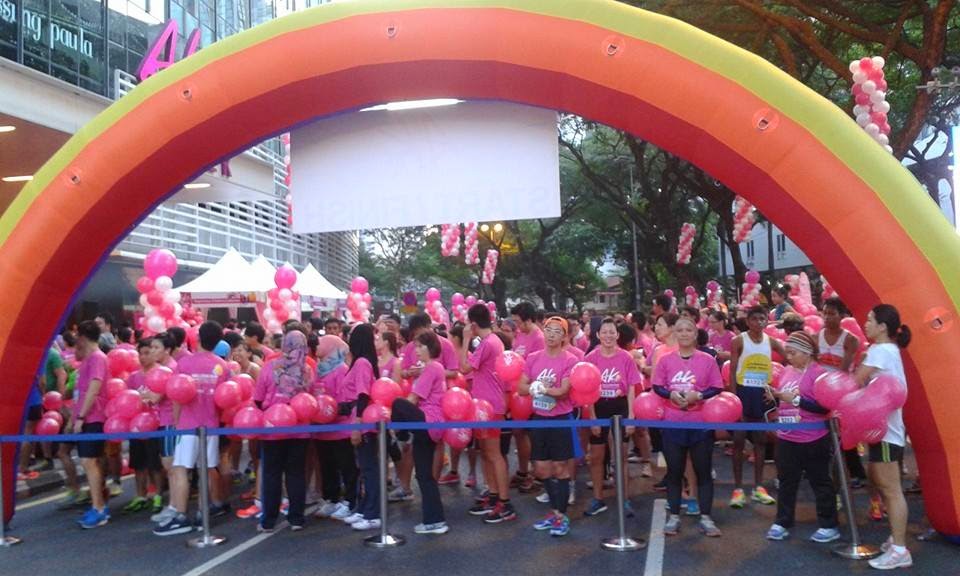 Treated this as a recovery walk so we just walked slowly and enjoyed the morning in KL.