- November 24, 2014
When the announcement of Putrajaya 100 Miles came out months earlier, I was quite excited to join it. Of course not doing the 100 Miles la, that would be crazy but I was seriously considering to do the 100K. My first 100K. 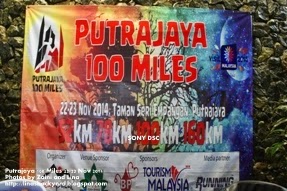 Later, despite the fact that I had registered for Fujisan Marathon and it'd be unwise to do any serious long distance running a week before the marathon, I still was "secretly" having hopes in doing it.

So to avoid "accidental" signing up, I registered myself and roped in hubby too, to become a volunteer for the event.

So, yeah... we didn't run in the Putrajaya 100 Miles but we still were involved somewhat in it and got to share the experience with those hardcore but fun loving runners who did this event.

Got home late night/early morning Saturday, as I attended my company's annual dinner on Friday. 5am was the reporting time and when we got there, a number of runners were already there. They will only flag-off at 7am! 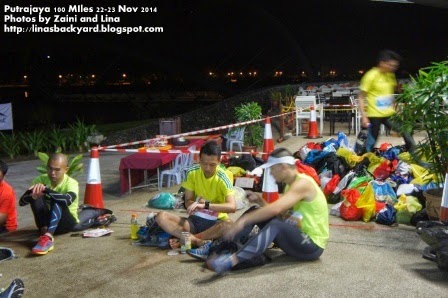 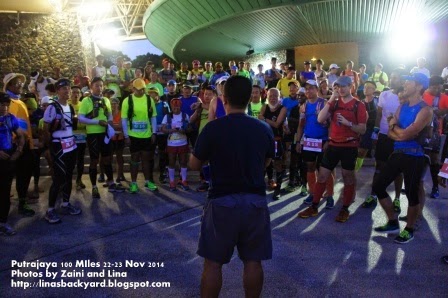 There was a last minute route change, and it was briefed to the runners by the race director; Arman. The Formula e in Putrajaya had some affect on the route the runners were supposed to run when they cover the core island/Nusa Perdana. 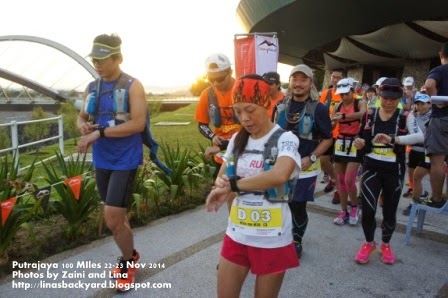 When all the runners had already been flagged-off, we headed towards our check point (CP) that we'll be manning from Saturday morning till Sunday. ^^ 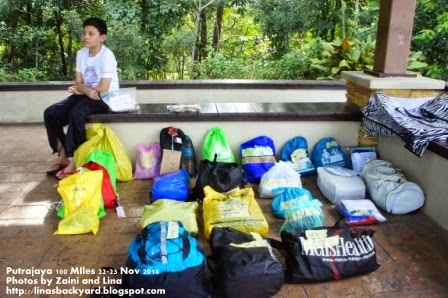 There were two other volunteers helping us along with two medics.

We set up the area and arranged the drop bags that runners had left for CP4 according to their categories. Boy in white jadi "jaga". Hahaha

We heard news that the first runner had arrived CP3 a few hours later and after waiting for our stock of ice to arrive and expecting the runner to arrive in about 30minutes or so later; Zaini decided to head out to 7-11 to buy some ice knowing that ice would be important for these runners.

There was a bit of drama with the ice as there seemed to be a big issue of the logistics of ice; what with the traffic jam experienced around Putrajaya (not only because of Formula E but also the Upin Ipin thing at PICC). In the end, Zaini and the other volunteer made about 4 visits just to buy ice. I insisted on having enough ice for ALL the runners arriving to my CP. Yeah... "MY" CP. Hahaha 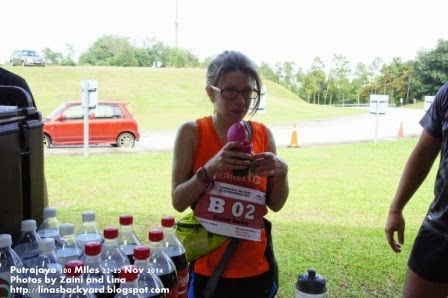 The first runner to arrive our CP. 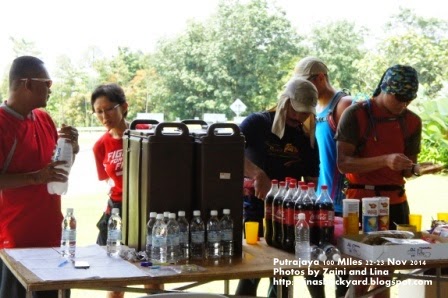 Runners started coming later and while they rested, they shared their experience running the first 39K.

There were issues with getting from CP1 to CP2 or CP3 and also a few runners mentioned that they got confused with a fork of road at the horse trail in Taman Rimba Alam just before they reached our CP where they ended up running an extra kilometre due to the confusion. An extra km with HILLS, I might add.

Around 12:40pm when our CP was quiet and no runners were seen coming, Zaini and I decided to jog into the horse trail to 1. check the confusing fork the runners mentioned and 2. check any more runners heading to our CP.

After putting a marking at the road (with dead wood and an empty oil bottle... HAHAHA), I went ahead running further into Taman Rimba Alam while Zaini waited.

Saw a female runner heading towards me after I did 1-2K, waved at her and immediately double back. Hong Lan, who was at our CP taking photos were waiting up the hill, at the fork of the road so I continued running to my CP.

There were more issues of runners getting lost elsewhere that we heard later, from those who arrived at out CP which are out of our control but at least we hope that other than the runners who arrived earlier, no other runners got lost at that confusing fork of road. 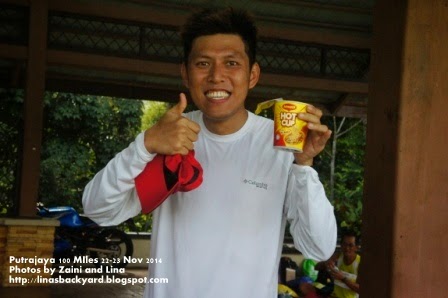 CP5, which was the check point after ours had more solid food for runners like rice... while ours had bread with nutella, kaya and something extra - maggi hot cup so runners weren't meant to stop for lunch at our CP.

But most runners who arrived our CP; from 11am onwards were already hungry and were happily chowing down food and accepting the instant noodle.

We sure was glad we brought in our own rations and pretty soon our muruku, kuih cincin and mamee were all devoured by the runners too! Totally understandable and I was just glad we had something to offer them.

However, there was something I overlooked. While our CP (and all other CPs) had prayer mat, kain pelikat and even slippers for Muslim runners; I overlooked the fact that female Muslim runners may need to use the telekung too. While I and the other lady volunteer/medic had the convenience of heading to the next CP (or in may case, my sis' place if I want to); the runners don't have that luxury. I'll take note of that for future CP that I'll be manning. 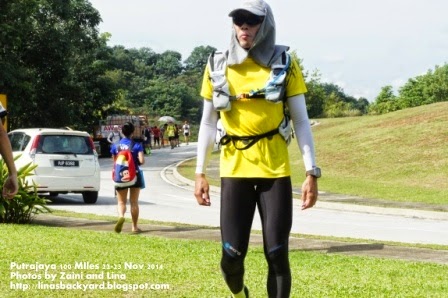 We were blessed with a really hot and sunny Saturday and I guess it took a toll on a lot of runners. Zaini and I actually were prepared to shoo runners out from our CP and get them to CP5 after a bit of rest but didn't have the heart to do it after all.

After a tough route from CP3 to CP4, some were glad to find a shade and even took a nap. Anything, just as long as they can continue afterwards.

I'm not that friendly with people so Zaini took charge with the PR side of our CP while I got "busy" with photo taking in between checking the runners that were resting at CP4 and the "anak bujang" was in charge of the timing of runners checking-in and out. 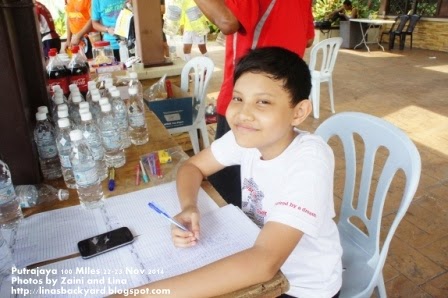 Pretty soon it got dark and we waited for the second wave of runners who are now running back to our CP to finish another 39K of the route to get to the finish line. 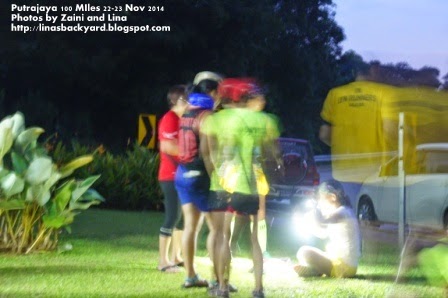 It rained in the evening, after a very very hot day earlier and made the night so much colder.

Some runners opted to stay and took a rest while some, already equipped with rain gear/poncho and headlamps (compulsory item for this event); continued on.

Apart from runners coming into our CP, the runners' support crew (pacers and supporters) intermittently drop by and waited at our CP which made the CP much livelier, with talks and laughters all around.

There were stories about runners getting lost due to some confusion with road markers and perhaps... not studying the route map well earlier. But whatever the reason, it was indeed worrying when runners who had already checked-out from CP5 and was supposed to reach our CP somehow never did show up.

There was a bit of worry as a runner whose supporter waited for hours at our CP didn't arrive our CP despite being reported having left the previous CP ages ago and was confirmed seen leaving the previous CP by runners who checked-in to our CP.

Good thing he was finally contactable and turned out that he somehow couldn't find the entry toward Taman Rimba Alam from the Taman Canseri/Presint Diplomatik area.

Nothing too major (I think and hope) happened at our CP. Runners, despite getting confused, got lost and even did extra mileage didn't throw any hissy fit towards us. I guess a certain dissatisfaction would arise this time for this inaugural event but none of them directed it towards us volunteers.

We are sorry we didn't have food to provide for runners who came by from midnight onwards although luckily some runners' friends generously passed what they had to us and we gladly offered it to runners who wanted something to eat. Thank you!

We closed our CP at around 8.00am on SUnday and left a few bottles of drinks for two runners who will be passing the CP later.

We headed back to Taman Seri Empangan where the Start/Finish line was to cheer for other friends who were finishing. 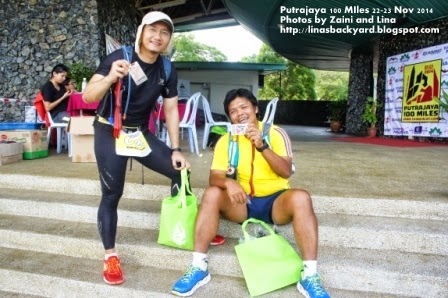 Just the fact that you made it to the start line and endured the hot weather condition is already a feat!

Some photos of Putrajaya 100 miles, taken at the start line and the 1st check-in at CP4 can be seen here.
Itchy Feet Race Recap