We went to Taiping last weekend for a 3D2N trip.

I had registered for the King of Bukit Larut road race and Zaini had committed to volunteer for the event which was held on Sunday, Apr 26th 2015.

I’ll probably blog about the other activities we did while in Taiping but first, a race recap of King of Bukit Larut 2015.

I entered and did the inaugural King of Bukit Larut in 2014. Last year, the organiser only had one category and that was for 21K, Men and Women Open.

This year, the race saw three distances being offered for Men and Women Open; 10K, 20K and 26K.

As I already did the 21K last year and had lots of fun doing it, I thought it would be a good idea to do a 26K this year. Verrrrrrrry good idea. Hah hah. *sarcasm* 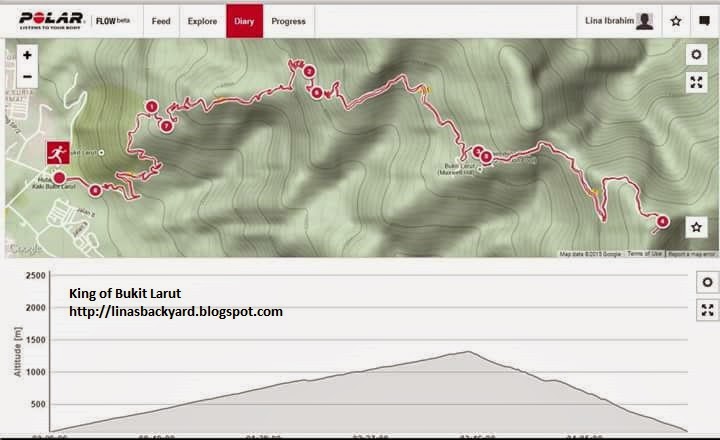 You just go up and up and when you’re tired, you go up some more, until you reached the 13K u-turn mark (where you can’t proceed any further anyway) and then, and only then you get to experience the downhill.
The flag off for King of Bukit Larut was 7.30am for 26K category, 7.45am for 20K and 8.00am for 10K. The weather was nice and since we are going up a hill; cooling. Perfect weather, just like in 2014. 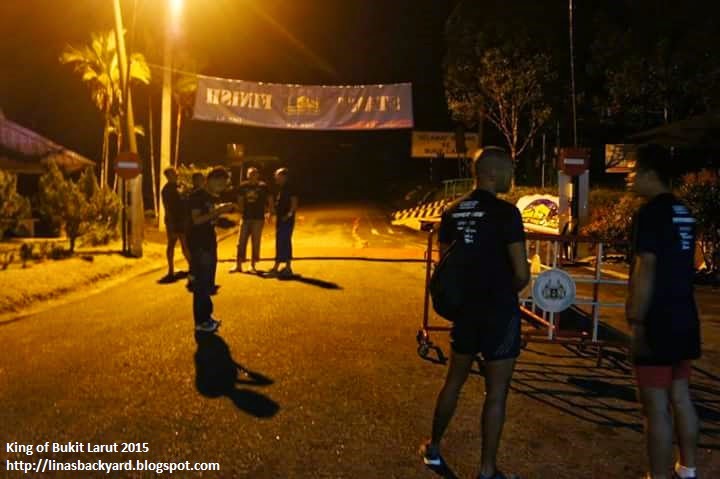 But I was already wide awake at 3.00am and was at the race site at 4.00am to keypoh-keypoh simply because Zaini was a volunteer at the race and had to report for duty at 4.30am. Well, I might as well see what I can do there also that time, right? (Although admittedly, I was not really helping at all. Hahaha)
Had a light breakfast at one of the stall at the foot of the hill that opened early at around 6.30am. 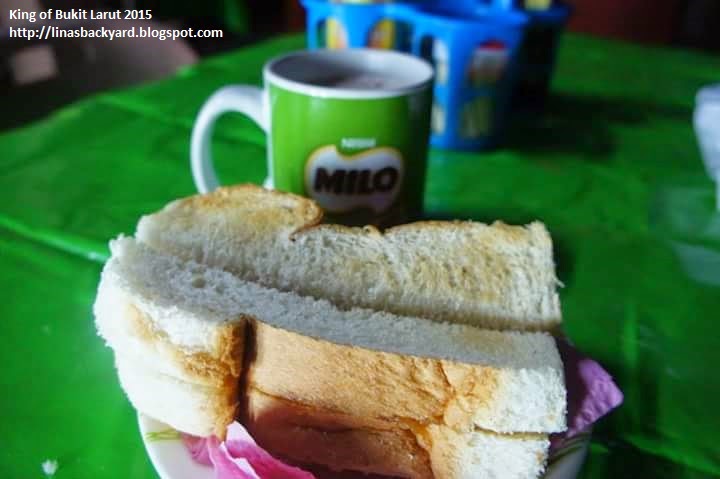 A cup of Milo and some toast. Pretty soon, runners started pouring in, into the race venue and the atmosphere got more cheerful (and loud).
While I was keypohing and taking runners’ photos, Yannie called me. She said she noticed me from afar already. ^^ 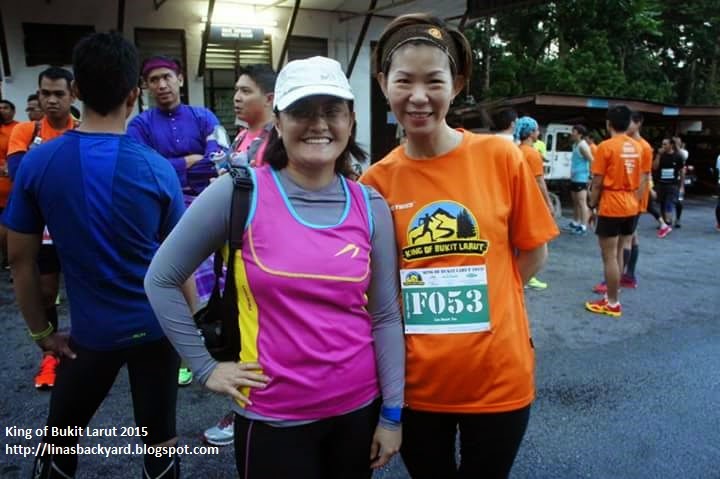 Terer one this lady. Her first 10K road race and she bagged third place! Congrats Yannie! And thank you for the delicious Taiping biscuits. 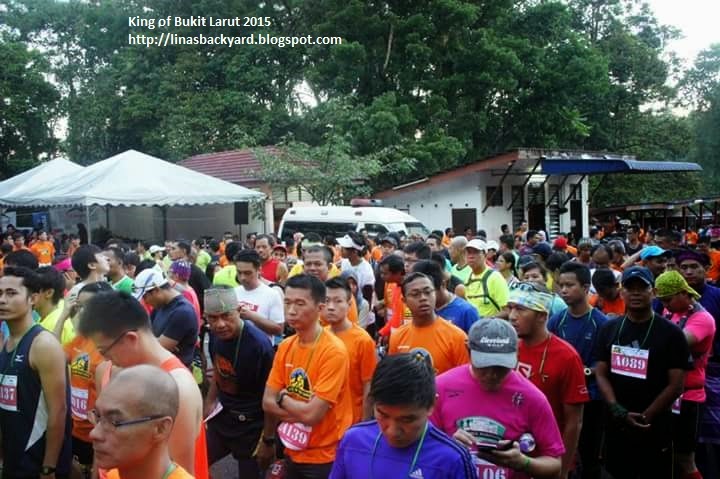 At around 7.15am, we were briefed by the race director and after singing Negaraku, the 26K were flagged off. 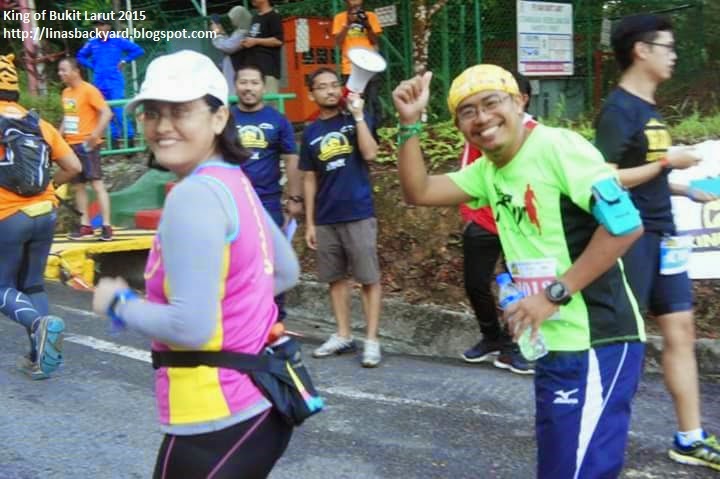 As always, I chose to start last, and pretty much stayed last till I reached the u-turn mark at KM13. 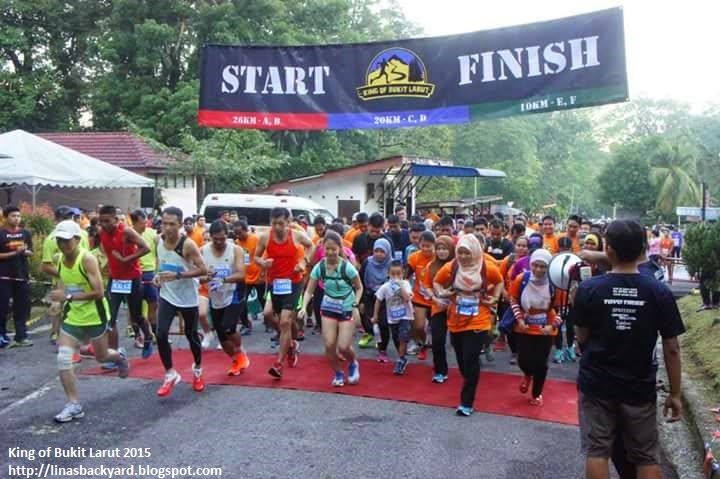 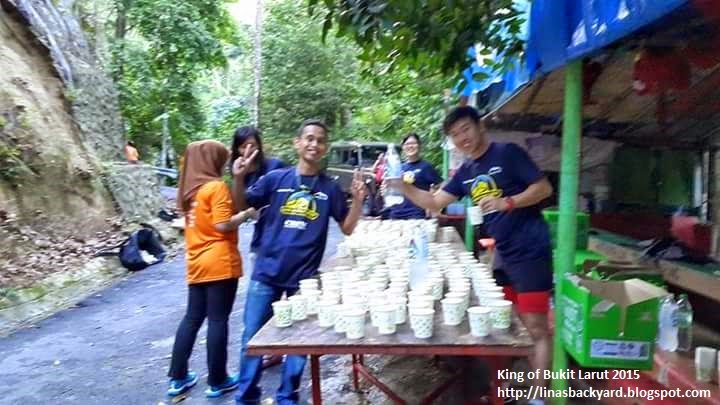 The first water station was at around KM3 and we were served 100-plus and mineral water here.
At around KM5, two 20K runners caught up with me and what an interesting duo they were. 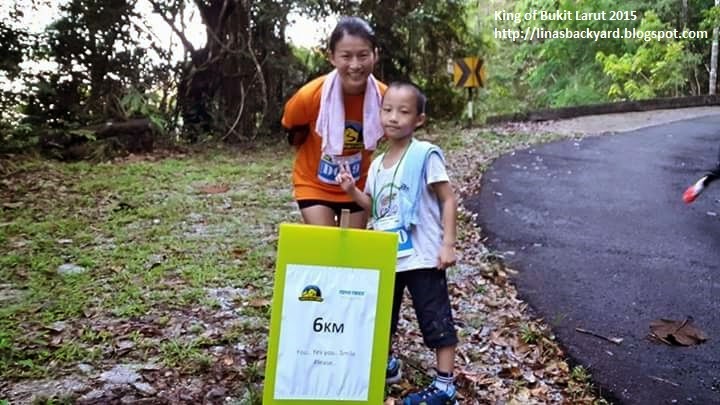 I decided to latch myself to the kid for company. He’s 8 years old and this was his first “this high” run. He said he never ran so “high” before. Both his Mom and Dad are runners so he must’ve gotten a lot of training sessions with them.
The boy received plenty of encouragement from other runners and he took them in in his stride. As I just kept myself just a bit behind him (not that he needed a chaperone or anything), I saw how well he handled himself going up the hill.

His Mom just maintained a reasonable lead and would occasionally call him up so that he’d keep up.

His Mom and I talked a bit and she said that kids have boundless energy to tackle this kind of distance. Even the previous week’s Kemensah Trail run saw plenty of kids, she said. 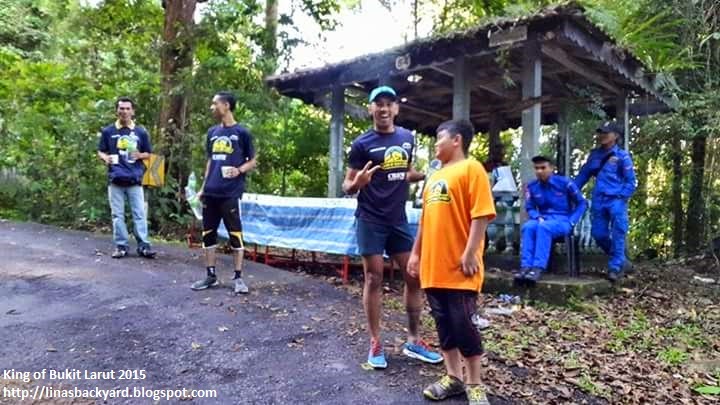 I wanted to stop here to check on my legs but somehow didn’t.

I had a cramp early on, and by KM3 both my foot were feeling numb especially the right one. It was so numb, I can’t feel the ground anymore. I didn’t really want to stop and waste time, so all I did was wiggle my toes while I walked, in the hope that blood would flow.

So on I trudge uphill while being passed-by, by other runners. I clapped as the lead runners ran downhill past me and a few were gracious enough to smile and say thank you. Didn’t expect it, but to receive it was so inspiring. 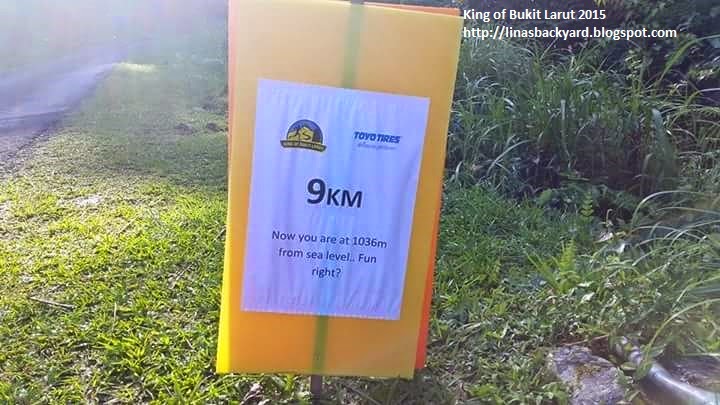 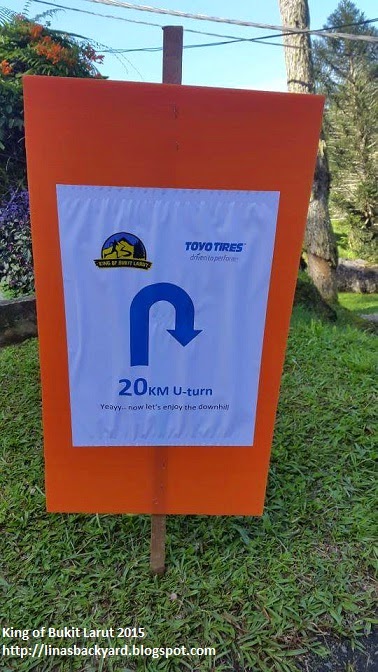 If I was doing the 20K, it’s only another 1K before I can make a u-turn and run downhill but nope, I chose to suffer more so my u-turn was about 4K away. 4K more of hills! 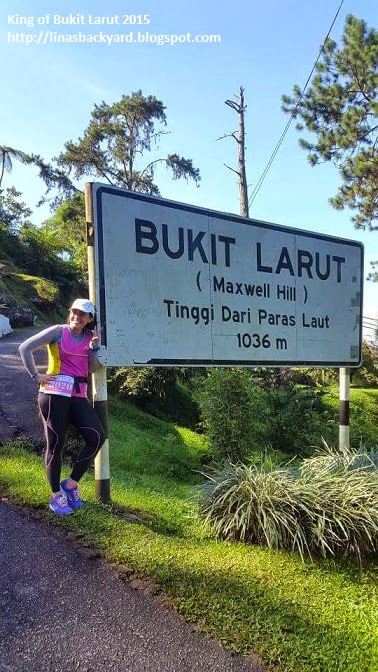 1036m above sea level. Took me more than two hours to trudge up here! Pathetic! Bwahaha. 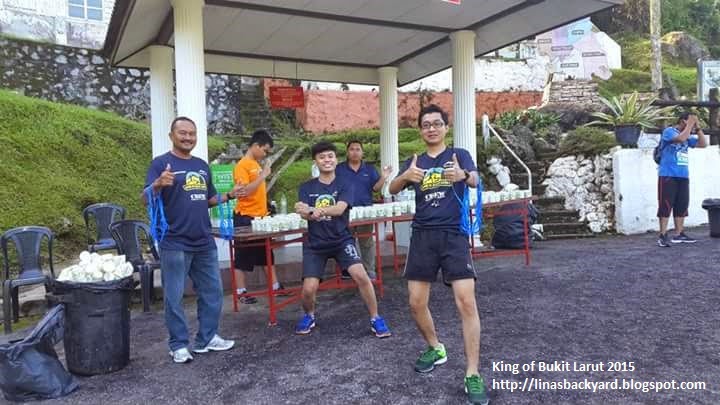 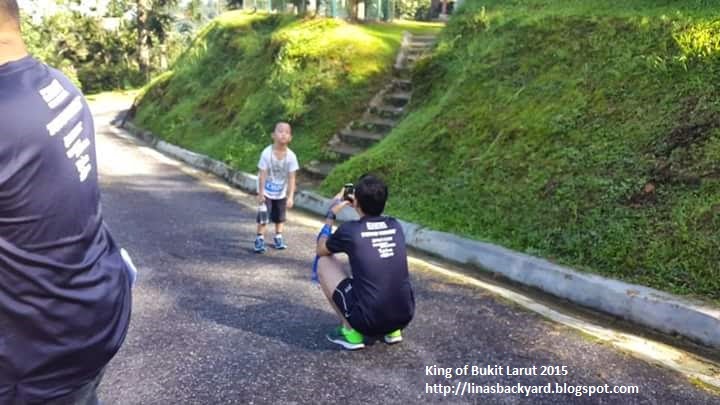 I decided to linger a bit and waited for the 8 year old to reach the u-turn point with his Mom. He was tired and his face certainly showed it but his Mom wasn’t too worried. I’ve seen that kind of “monyok” face on my son too, when we drag him for a particularly tiring hike. Hahaha


All is good for the duo as they both finished their 20K race. Congrats to both!


Then I continued on with the balance of the uphill run and by now saw more 26K runners coming down and I received plenty of encouragement from them to keep going. 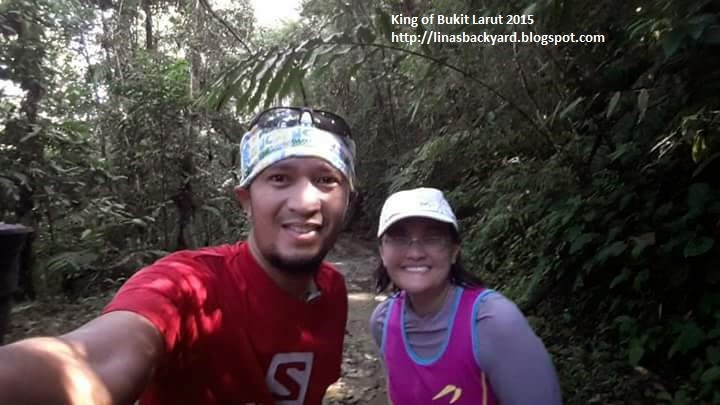 Took a few shots of them running past me, and a selfie too, with a friend. ^^ 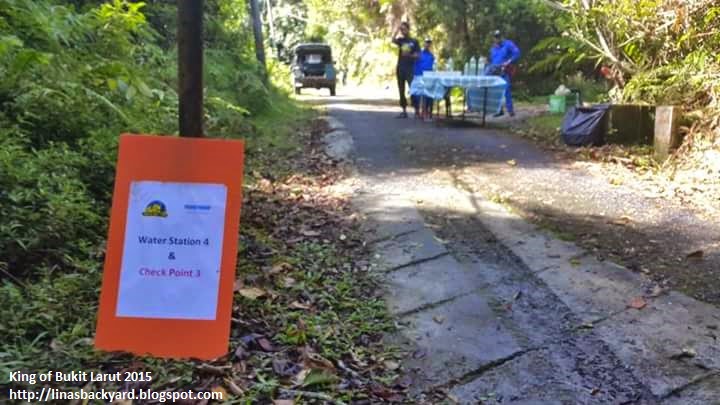 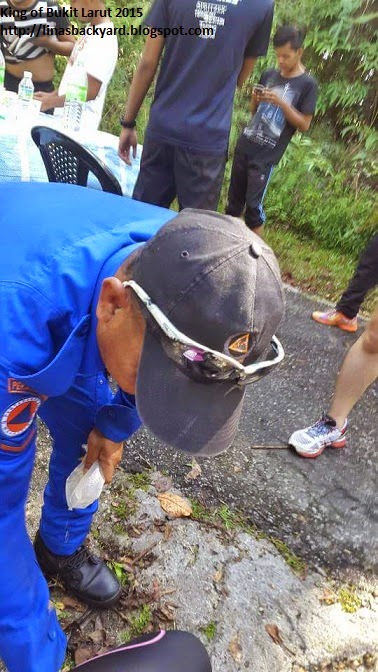 I really couldn’t stand the pain on my calves so finally, yes finally, I asked for a spray from the JPAM officers stationed at the water station.
They told me to sit down and one proceeded to spray my legs. Another, with a bag of ice in hand, proceeded to rub my calves afterwards and told me that the cramp was worse on my right calf and continued to ice massage it for a few minutes.

I reached the KM13 u-turn point after walking up for 3 hours, collected my ribbon and finally changed my walk to a run. The spray and ice massage earlier helped tremendously.

Gotta be careful running downhill though. Not only was it tough on the knees, the road was steep and slippery from the moss that grow on the road too.
For the downhill run, I made sure I stop at each water station to not only drink but also get some spray for my legs.

Managed to catch up with a few other runners who were also already going down but I didn’t stop this time. The aim for me for the downhill route was to make up for the slow uphill walk.
It was during the downhill run that I passed a group of students. I think they thought that it was fun to do a manic sprint downhill, on a particularly steep section to boot, so I stepped aside and waited for every single one of them to run down past me. I had no desire to get tangled by any one of them if or when they stumble or stopped.


I had to admit I was quite cross with them, as when one of them dropped a bottle of mineral water, realised she dropped it but didn’t bother to pick it up, I yelled at her to stop and pick the damn bottle.
My words to her was “you go hiking, you learn to pick your trash”.

It was a relief when they stopped at the water station, which was 7K away from the finish line as I do not have to keep a watch on both sides of the road for sudden sprinters who might trip me.

A one and a half hour 13K downhill run later, and finish line was in sight! 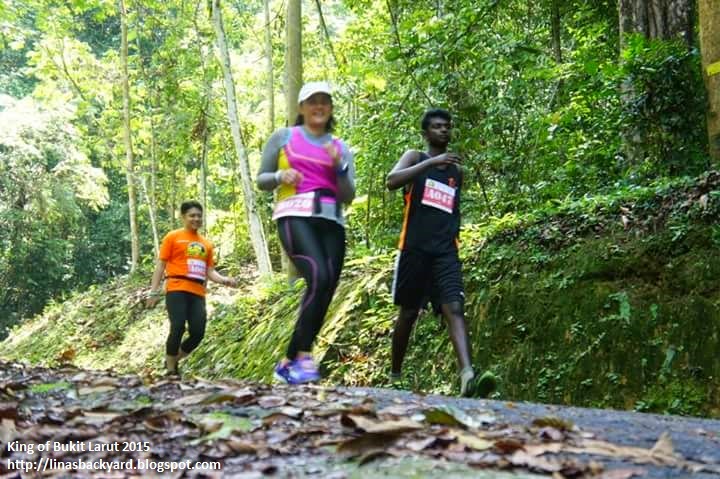 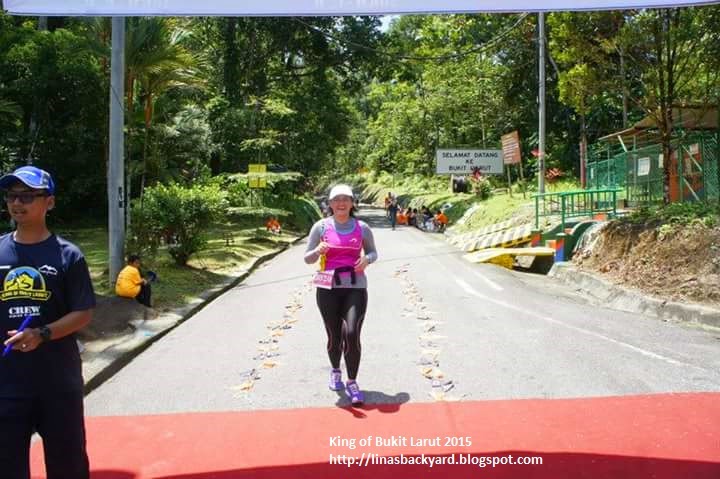 A bonus for stragglers like me, I got the finish line ALL to myself. Bwahaha 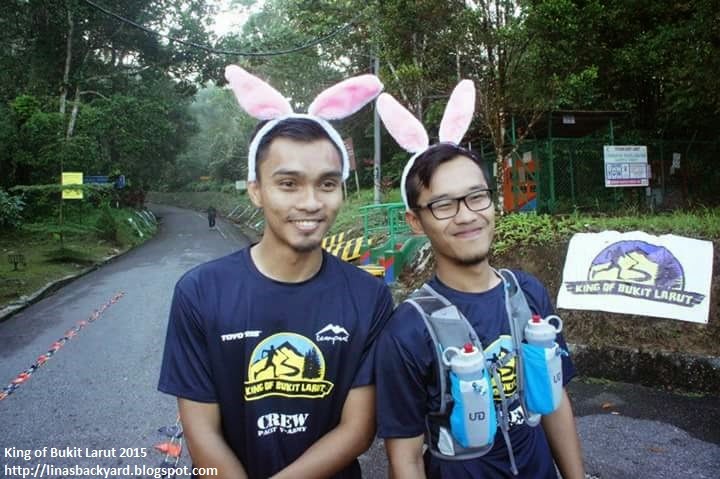 Saw these fellas going up while I was going down. The rabbit ear runners were the official sweeper. Their task was to ensure the last runner was (were) safe and sound as all runners need to be accounted for. 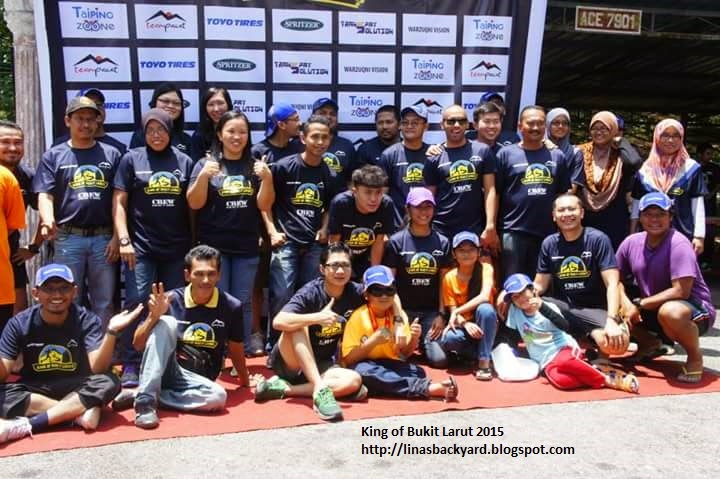 
All in all, the King of Bukit Larut is a good training for me to handle hills.


I didn’t do as well as I had wanted as my uphill section exceeded my target by 30 minutes but I was happy that my downhill run went well and even faster than my initial target. Plus my knees didn’t suffer at all. I really have to work on my uphill and get more awesome running downhill.

I crossed the finish line with hubby and son waiting for me. Got my medal and goodie bag and then immediately hobbled to the first aid room. The downhill running section made my ankle a bit painful so I wanted to treat it first.

I had a few rounds of good “makan” in Taiping, met friends, visited a friend’s old school, ran and got some mileage. And oh yes, even went for a dental appointment, at a clinic of one of my running friends.

This year's race wasn't a makan race for me. I was too slow to get the cendol after I finished and somehow I lost my appetite to enjoy their nasi lemak too. Pity lah. But all in all, a very good weekend for me.

Tentative date for the next edition of King of Bukit Larut is on Apr 17th, 2016. Mark your calendar.
Email Post
Labels: Close to my heart Itchy Feet Race Recap Travel - Perak Vacation