Back to Back 2 Endurance For The 2nd Time

I was back for the 12-hour Back 2 Endurance last Sunday at Lake Garden (Taman Botani Perdana) and it’s my second time joining this endurance run.

The format of the run is simple. Just do as many loops of 2.3K around Lake Garden as you can within 12 hours.

I did pretty OK last year, had lots of fun and managed to put in 62.2K.

My dream distance for this year was 80K. I've done 80K before, but at the Watergate 16-hour and yes, it took me 16-hours to complete it. So, to be able to achieve the same distance within 12 hours, I have to somehow shave off 4-hours. The thing is, I just walked when I did Watergate 16-hour. I planned to run more than I walk for Back 2 Endurance.

I knew it would be a tall order but nothing wrong in dreaming and trying to achieve our dream, right?

Anyways, after doing a test run of 10 loops around Lake Garden a week before the event, it’s back to the drawing board for me to re-asses what I want to achieve and what I’d be able to achieve, realistically.

After breaking my timing for each loop for guidance and segmenting it further to 5 loops with a target time to finish at every 5 loops; I decided that it was more realistic to aim to do 33 loops or 75.9K.

The day before race day, my period came. It’s one of those thing we female runners experience that is unique to us compared to being a male runner.

Race morning.
It was still raining when we started and remained raining for another 3 hours.
I had prepared for the eventually of rain, so I brought along with me, not only 3 sets of change of clothing and shoes; I also brought along my windbreaker.

I wore it more to keep warm than to avoid getting wet because we don’t want to be shivering under the rain and suffer for many hours!

Because of the rain, the sun came out a little later and it took me about two loops to finally see the sunlight. It affected my running pace somewhat as I was more conscious in running on the pavement. That and the fact that it took ages for my legs longer to properly warmed-up.

I had targeted to complete the first 5 loops by 8.00am but with the slower than planned pace, I finished it almost 10 minutes later than target. The next 5 loops was near target, which I targeted to do by 9.35am; and I was still only on 1 loop deficit.

I stopped after the 8th loop as there was a tell-tale sign of blistering because of wet shoes and socks. Put some Vaseline on both of my feet and I told hubby I may need to change shoes after my 9th loop.

A friend, Evelyn and her buddy came and ran with me after her morning run as I started my 12th loop. She accompanied me until I finished my 15th loop. *muaks*

I managed to keep running until KM30 before a sharp pain just above my kneecap made me reduce my pace and walked instead. It was particularly painful when I hit the incline near the man-made waterfall/field at Lake Garden.

There was also signs of my legs cramping up. Combined with my tummy cramping, it sure ain’t pretty. Evelyn passed some salt tablets to hubby later for me to take and I took them later. I’m not sure why I cramped up this time as I don’t normally experience leg cramps while I’m out for a long run.

There and then I decided, instead of trying to push it and risk further injury, I’d just walk off the pain and when I felt better, I ran. Until pain hit again.
The remaining distance was pretty much that way. I’d run until I felt discomfort on my left knee and then I’d walk. But I’d run without fail the last 200m towards the Start/Finish line for each loop.

I did the 4th 5 loops (46K) in 1 hour 59min. My target time for this 5 loops was 1 hour 45min. So by now I was almost 30min slower than my target. I wasn’t too worried though as I still want to keep focused and it did help me to just think of getting through 5 loops at a time.
I had aimed to get 50K (22 loops) before I stop for lunch and the plan was to hit that distance within 7 hours but by this time I was off by 33minutes from my target.

From this point, I decided to cut short my rest stops and instead of spending 30 minutes stopping to enjoy lunch, I stopped for 15 minutes. To eat and re-tape my feet to avoid blisters.

I still managed to chat with friends at the rest area but this year, with the help of hubby to feed me and also remind when to get moving, I didn’t linger for too long.

To avoid hunger, I decided to eat on the go. I took a banana and enjoy it while walking part of the route. Later, I enjoyed a nice aiskrim potong bought by a photographer/runner which he had nicely shared with everybody.

Since my knee was still bugging me and I was unable to run more than 2 minutes at a time, it was an alternate between a 1.30minute run and a 1minute walk. I had aimed to reach 60K mark (26 loops) in 9hours but I only managed to do so in 9hours 41minutes. 41 minutes is worth 2 loops!

I discussed my plan with hubby and the race director and made a new target for 31 loops or 71.3K instead.

The final 5 loops was done in 2 hours 03minutes, with the final total timing for 71.3K in 11hours 52minutes with 8 minutes to spare. If I had another 20minutes, I certainly would die-die try to get another loop but even though I was coaxed to so and push hard for the final 3 loops to get in an extra loop, I decided not to. Not with a knee injury at stake and the fact that I need to resume normal training by this Wednesday. 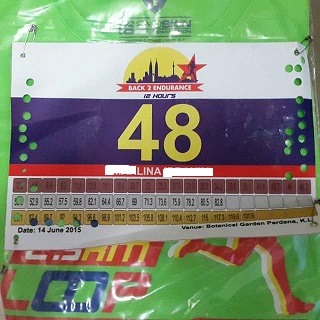 While Back2 Endurance was something I look forward to do and excel in, this wasn’t the race I am training for. So instead of jeopardising a future race that I really need to do well in, I decided 31 loops is good for me this time. I’ll train better and smarter to be a much stronger runner for next year’s Back 2 Endurance edition and maybe aim for GOLD medal! (That’s 36 loops minimum).

The looping around for 12 hours was made bearable because: 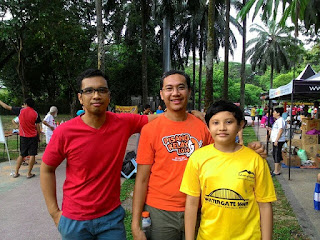 1. There were a lot of stuff to see around Lake Garden. A family, day, a yoga gathering, few groups picnicking, cosplayers and bride & grooms photoshoots.
2. Free entry to the public toilets for participants. Yeay! Hahaha… But seriously, when you need to go to the toilet and change every 4-hours, free toilet entry is a bonus. Try having a period to understand this.
3. Chatting while running or walking around the lake with fellow runners.
4. Encouragement by other runners and it certainly boosted my morale to have respected runners like Ben Swee and Frank encouraging me.
5. Cheerful fellow runners.
6. Photographers going around the lake. Nothing better to make a tired runner run than having a photographer aiming their lens at the runners! Hahaha
7. Family and friends who dropped by to support, or in my case stayed the whole 12-hours to support me. Both hubby and son kept me company for a few loops, at different times.
8. Friendly and cheerful volunteers.
While I didn’t meet my target, I was still happy of what I achieved last Sunday, considering all the factors that I had to face.

And this result made me happy too. Ahahah
Email Post
Labels: Itchy Feet Race Recap