The Saturday Of The First Week Of School Holiday

What a mouthful of a title. Hehehe

I wanted to do a race simulation for next week's 12-hour Back 2 Endurance at Lake Garden to gauge timing, rest stops, blister management, heat and stuff that I'll experience during the run; you know better be prepared if you aim high, so that's what I did today. ^^

Hubby and Son tagged along to Lake Garden too but instead of doing the 10 x 2.3K loops like I did, they took their time and stroll and just enjoying the outdoors.

There was a "Mat Salleh" Daddy who was training around the loops too at the same time as me and he had his family tagging along and I noticed, what he did was run solo and mixing it up with play-time with his son.

Yes, we Mommies and Daddies do that. Instead of being selfish of following our training plan alone, we mixed our training with time with our family too. Although I guess we are a bit selfish for expecting our families to understand what we want to do. It does need the compromise from both sides, plenty of give and take and a whole lot of understanding when one starts to be serious about training especially for a marathon and above distances.

We bumped into quite a number of running friends when we got to Lake Garden around 9:15am and most were done with their run. Pity I didn't take any photo with them.

I had at first thought of starting the first lap with a stroll with Hubby and Son but they literally pushed me to start running instead of dilly-dallying. Hahaha

But I did stop whenever I bumped into them during my run. I have a reason to do so. 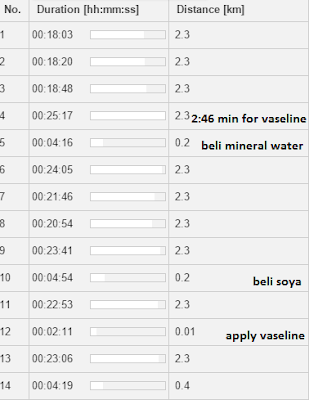 The aim today was for me to gauge my timing for each splits.

So I split it into "Run Only", "Walk Only", "Speed Walk" and "Walk and Run" laps so that I could check on the timing and pacing for each laps that I did differently.

Why do I do this?

Because 12-hours is long. I certainly cannot run the whole of 12-hours and as a respected, international ultra-marathoner once advised me, walking is running in ultra-marathons. The most important thing to remember is to keep moving.

By knowing how fast or how slow I run, walk or walk & run, I could assess my ability and set an aim on the mileage that I want to achieve next week and plan on my pace accordingly. I do not want to start full steam ahead and then lose all the steam barely halfway through the race. Nope. I intend to keep moving until the 12th hour. 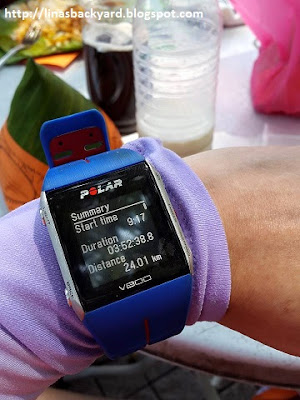 24K in almost 4 hours, with all the stops and even chit-chatting with the "Bihun Sup" pakcik who told me it's way harder to go to Sogo than run around Lake Garden! Hahaha

As I finished my run at 1:00pm, it was a great time to have our lunch at the cafeteria nearby the playground area at Lake Garden. 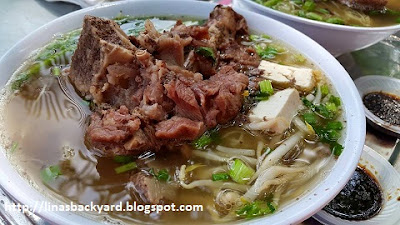 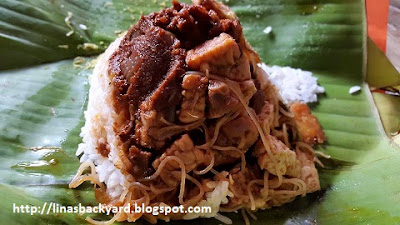 And enjoy two of our favourite food there.

Bihun sup tulang and nasi ambeng. We even tapau'ed the nasi ambeng to bring home. ^^

The bihun sup tulang was awesome. The tulang (bone) had plenty of meat on it and they literally fall off the bone, it was so tender! Great, great recovery food and it doesn't really cost me a bomb! 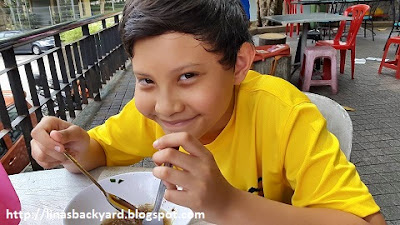 We got home at around 3pm and had already promised Son we'd go to the apartment's pool as soon as we got home but we got delayed.

Son, who absolutely adores cat heard a cat meowing and we investigated. Turned out a kitten was meowing for its mom (who was nowhere around) and was definitely terrified. 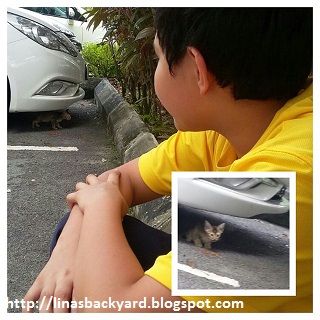 Worried that it would climb up into our neighbour's car engine, we tried to coax it to come out. It was jittery, wary of us humans and jumped every time a car/motorbike passed by. Oh dear.

We put some cat food to entice it to come out and it did but it would run away when we tried to come near.

After about 40 minutes, we decided that we'd leave the cat for the time being, left some food and water and put it away from the car so that the kitten would come out from under the car and we headed home.

When we returned from the pool 30 minutes later, we saw the kitten was drinking the water we had left. Hopefully, when we try again later this evening, the kitten would be less terrified of us. *cross fingers*

Let's hope the kitten likes us, yeah?
Email Post
Labels: Close to my heart Gardens and Parks Itchy Feet Makan Time Out and About