It's funny. I didn't actually plan to run a full marathon and especially not at River Jungle Marathon (RJM).

I'm currently following a 16-week training plan and this week I was supposed to do a 51K easy run. Months earlier, Hubby and I actually had planned to join The Magnificent Merapoh Trail in Merapoh, Pahang and get my mileage there. 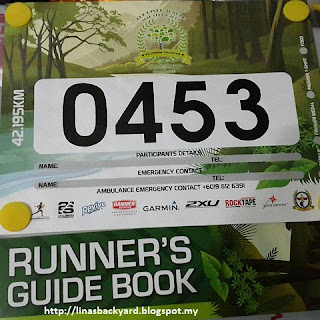 But life happens and we had to bail out from the race (which I heard so many positive reviews about, after the trail run on Saturday) and I registered for RJM instead.

Back to the race.

A friend (two friends actually, as they're a couple) helped to pick my bib on Saturday and had kindly went to the place where hubby works and passed my bib to him. Thank you!!!

My plan for this run was simple. Although I was supposed to do an easy run, I wanted to hit 34K within 5 hours. For a slowpoke, a 5 hours 34K is a big deal, OK?

Having already ran the RJM with the same route last year; I put out my pace chart, bearing in mind that there will be a 2.5K climb starting from KM20 and another climb after KM32. 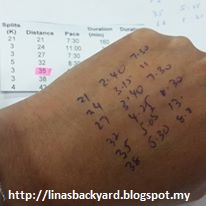 My pace chart. Written on my hand for easy reference while running.

The first 21K was set at 10sec slower than my last HM pace at Seremban HM and I also had to accommodate time for stops that I'd make before I reach KM18. Then slower times for the climb and around a 7.30min/km pace when I go downhill and so on...

According to paper, I'd finish RJM within 6:05. Pretty good timing if I can nail it and for a training run to boot, I thought.

Truthfully, the first 21K timing was off by 6 minutes. I got hungry after KM18 and reaching KM19, I thought I shouldn't be pushing too much in order not to drain energy to soon. So I started to walk towards KM20 water station (WS). I'd already stopped at all of the water stations located at KM5, 8, 11, 14 and 17.

Thankfully, at KM20 WS they not only served water and Revive, but also rambutans! I ate three because I was hungry. Although happy that I managed to eat something, I just walked from KM20 up to the u-turn point at KM23.7 with some occasional running on flat sections.

The u-turn WS was kinda the highlight because it served durians! And yes, runners did indulge in them. We knew the u-turn was nearby when we could already smell the durians waiting for us. Hahaha

It was a downhill until KM27 or so, and I stopped at KM26 WS to eat some bananas to refuel.

It's always important to manage our fueling or tell-tale blisters etc before it got worse and I was mindful of that. At every water station, I'd eat the local fruits served (rambutan, durians, bananas, langsat, coconut drinks, longan...) and I'd stop to tend to my feet if it felt uncomfortable.

Just a few minutes of TLC will save a lot of time later and ensure I didn't prolong any suffering during my run. It's not worth the pain just to chase a good timing, IMHO. But that's me lah...

I was happy to note that when I reached KM27, I had a 3minutes buffer against my pace chart. I was running faster than my target and I was still feeling good! Yeay!

But I still maintained a conservative effort and I'd walk up any inclines and run on flats and downhills, knowing that I need some energy to tackle that badass of a hill at KM32.

I got to KM32 WS in 4:19 and since I had a few extra minutes, I decided to really enjoy the coconut drinks that were served there. Drank slowly and ate the "isi kelapa" until all was finished. Heaven, I tell you.

Then a few hundred metres from the KM32 WS we faced the dreaded hill. And I opted to walk all the incline. No need to waste so much energy running it lah, I figured. At that point, I was confident I'd finish in 6 hours. Hohoho

Thank goodness that the 2015 edition started 1 hour earlier than last year and the fact that the weather was great this year, the 3K climb wasn't all that bad compared to the zombie walk that I did last year. Having friends to yak about nonsense helped too. As a matter of fact, there were many friends who made this Sunday run so nice and joyful. Hey! I even talked about the newly launched SCKLM licensed merchandise that was launched on Thursday with friends during my run. LOL

Got to KM35 in 4:54, which was 11 minutes faster than targeted. Great! From KM35 onwards, my pace got a bit faster as we were now facing the downhill section. Oh thank goodness.

I reached KM38 WS in 5:15, which is already 15 minutes faster than my target. Yeay again! And I'm still kinda enjoying myself. A bit tired but still in happy mood. Double yeay!

Reached the last WS at KM40 in 5:32 and I would now face the flat sections of the race route.

At this point, seeing that I still had about 30 minutes to get a 6-hour finish; I had actually thought of just finishing the rest of the route by walking.

I did so, but then it got boring and I'd run for a few hundred metres before I stop for walk breaks again. Admittedly by 40K I was feeling a bit tired, and doing the run/walk helped a lot. I'd run for 200m and then walk for a few hundred metres. There was a tell-tale sign of a cramp before I got to KM40 WS and I figured I'd take a salt tablet there.

Guess what? I saw Pepsi being served, and longans too, and totally forgot to take my salt tablets! Adui! 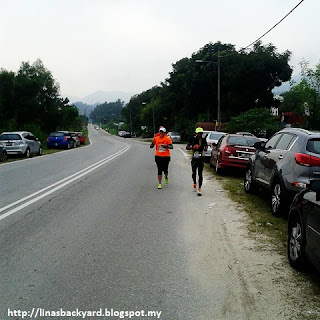 I saw hubby waiting for me about 300m from the finish line and quickly passed him my phone so he could take my photos later. ^^

He ran alongside until I crossed the finish line. I didn't want to run at first and he told me off by saying "I know you got a PB (personal best). Don't be arrogant". So with that, I ran. Bah! 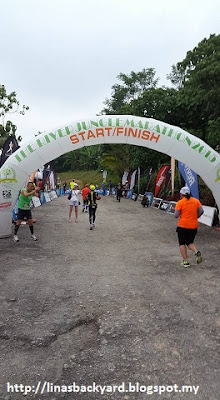 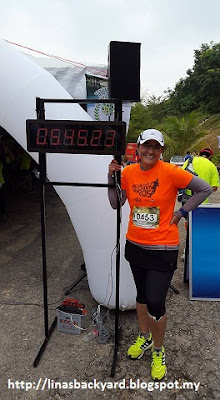 Smiled, smiled at photogs and friends and finally made my way to this clock. OK lah, show 5:45:23 also I am OK one. Hahaha

It was indeed a great run today. I had a lot of fun.

I wore my adidas Energy Boost (EB) today and this was the shoes' longest distance so far and it fared great. Only thing was, I seemed to be sweating more in this compared to the Climacool model so by the time I took off my shoes, my socks were soaking wet!

No issues with hotspots of blisters so I think EB is a great shoes, for any distance. I've had good experience in it, running in 2 10K races earlier last month too.

Volunteers and crews were great. Photographers were awesome especially the very noisy Kahwai and Renee. Thank you!

Water stations were great. All the local fruits served were awesome. Route was good. Weather was perfect.

Thank you also to friends who said hi along the route. You made my day (and run!)

*muaks*
Email Post
Labels: Close to my heart Itchy Feet Out and About