Not Driving? No Problem If I Have Time To Kill

Well, only if you are in no hurry to get anywhere that is... While the journey was fast and painless not to mention cheap, the waiting time for the train is murder! I once waited more than 30 minutes for a train just to get me from KL Sentral to Midvalley station. Ugh! Walking from Bangsar LRT station to Midvalley would've been faster.
Since Zaini wasn't around to send us back to our home in Balakong, Raimie and I took the KTM Komuter train and bus back from my FIL's house to our place on Saturday. 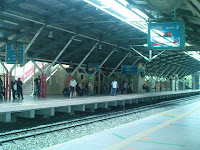 At MidValley station, waiting for our train. Total waiting time: 32 minutes. Luckily, not many people were waiting for train bound to Seremban at that time. Considering the relatively short train (just four coaches, if I'm not mistaken) and the huge number of commuters daily, why can't the train frequency be increased? 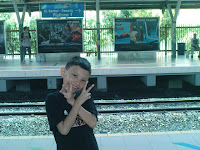 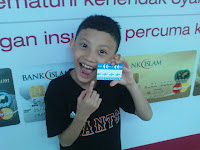 To kill off time, we took photos. Raimie with his blue-coloured children ticket. 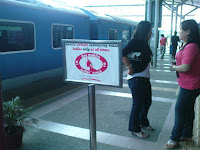 There's plenty of brouhaha over the implementation of ladies only coach recently.
Raimie and I took our rode in the coach which was filled almost to full capacity with ladies and children. There were a few stray men inside the ladies only coach. A few seemed uncaring over the notice pasted on the coach signaling it's a ladies only coach but one or two men accidentally went in and tried to went out again but decided not to, because I guess they did not want to be left behind. Changing coach while on board? It's hardly any space to walk inside!
It was nice to see there were enforcement being made to implement the ladies only coach at certain stations but I feel the notice of where the ladies only coach will stop at the station'splatform are lacking. Not all station have the sign like the one in the photo above. Some like Midvalley station has a cloth banner for ladies coach waiting area but the coach didn't stop exactly at the spot where the banner was tied up.
KTM, why not put a marking on where the ladies coach would stop on the platform floor instead of just putting up temporary banners? It'll save people from confusion and save some people from having to run over to another door to enter another coach.
Anyway, our train trip was a 17 painless minutes. It was a smooth ride and I like the fact that being in a ladies coach, it was much quieter. Nobody seemed to be talking loudly in there! It was like riding a train in Japan! LOL
Instead of taking a cab to our home from the train station, we waited for a mini bus and paid 80 sen for the ride as opposed to a RM10 cab fare for a 5 minute ride. RM10 for a trip that's less than 4km away is to me, daylight robbery.
As I mentioned at the start of this post, it is not a problem using the public transport but only if you are not in a hurry to get somewhere. If I am to use the public transport for my daily commute (like I did years ago - I used the LRT shuttle bus, the LRT and another bus just to get from my home to my office and I did it for 5 years!), I need to set a few more hours each morning and evening for travelling time. Not something I want to do on daily basis anymore. (and the Government wonders why the percentage of users of public transport is not as high as they wish it is)
Email Post
Labels: Out and About Public Transport