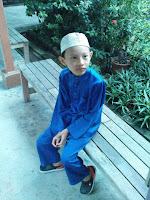 Raimie had to go to school last Saturday for his Kem Bestari Solat (Prayer camp for Muslim students) so we were out of our home early on Saturday. No late morning for us, which meant I didn't spend the whole night watching Korean show. ^-^
He asked to wear his blue Baju Melayu although the baju melayu is already a tad small for him. We bought this baju for Hari Raya 3 years ago, if I'm not mistaken. :D
While he was at school from 8.00am - 12.00pm, Mom and Dad went to Lake Garden for a "date". *^-^*
Lake Garden was abuzz with activity last week. Not so much by the visitors but by DBKL's contractors. Plenty of work being done. I guess there was a new budget allocation for upgrading/maintaining the park because nothing was left untouched. Old tiles for pavements being changed to new ones, trees chopped off, sweepers everywhere, trucks parked on pavements, new trees and flowers planted.... So much activity, it wasn't fun strolling at the park last week. I wonder when all these work will finish? 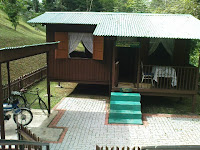 After stopping by Tun Abdul Razak Memorial (who was Malaysia's second Prime Minister and was hailed as "Father of Development), we visited this FELDA prototype house located at the back of the Memorial. This house was built for FELDA settlers at a cost of RM4,200.00.
FELDA or the Federal Land Development Authority  is an agency handling the resettlement of rural poor into newly developed areas. FELDA's role is to develop new land for plantation areas in a productive way by adopting effective agricultural management practices among the settlers as well as to encourage the development of a progressive and disciplined community.
This type of house is now virtually gone from FELDA settlements and settlers are now living relatively well, with much grander house to live in too!
We had plenty of time to kill, and with no other visitors stopping by, we had a blast reading the visitors book there. KLites, have you ever been to this FELDA house or even to Tun Abdul Razak Memorial?
Email Post
Labels: Gardens and Parks Out and About