What Type Of Student Were You?

I'm feeling a little bit nostalgic. My college friends had an informal gathering last week and there were plenty of photos and catching up on news of old college friends in the facebook.  But looking at photos, I was like - OMG! Are we that old already??!! I'm in denial that I've already reached 35. I don't feel 35 at all! LOL

There was a comment in the facebook by one of my ex-lecturer on how I'm doing and whether I'm still quiet and shy. Yes, well... I was mostly quiet and reticent in front of teachers and lecturers!
Anyway, all these catching up got me thinking. How was I during my school years? I had a really memorable experience during secondary school. College life was a matter of waking up and going to class and not having much life. Imagine attending class from 8.00am to 5.00pm 5 days a week! 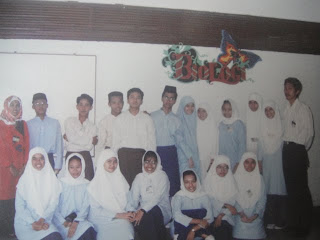 Classes were boring but outside the classroom, school was sure one hell of experience for me!
I studied in MRSM Kuantan in Form 1 & 2 and I really had many "adventures" there.
Along with a bunch of Form 1 girls, we managed to incur the wrath of seniors by:
1. Joining a choir group. We were branded unIslamic for singing in front of audiences, and getting hauled from one senior’s room to the other getting an earful was a norm for us in the choir group. (It was OK to join pantomimes, dramas, perform traditional dance or act out “bersanding” ceremony but not singing. Figure that one out).
2. Joining the Kelab Perahu Layar (sailing club), which was a club somewhat exclusive to boys prior to five of us girls joining it. The senior boys complained about us to the senior girls. Here we go again... More lectures from the seniors. There were plenty of pressure for us to quit the club but we were young and headstrong and we couldn’t care less what people said. LOL 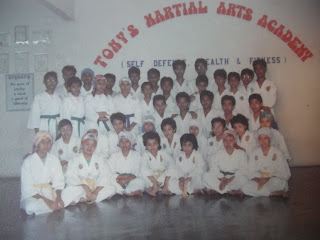 Being on the Tae Kwon Do team was a great way for me to escape classes and prep sessions too! I would follow the team to tournaments even on the eve of an exam day!
Because of my dismal attendance to classes, the principal had to call my parents to come to school and counsel me! I think I managed to avoid being in the science lab for two months! o.O 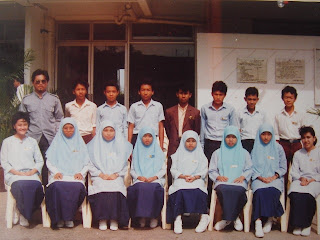 Me at 15 with my homeroom members.
I transferred school to MRSM Kerteh in Terengganu when I was in Form 3. This was the year I sat for my SRP (We were the last batch to sit for an SRP exam. Form 3 students now sit for PMR).
Did I buckle down and study? Nope. I joined anything and everything that year. Sports, spelling bee, deklamasi puisi (is it called poetry recital?), nasyid, jungle trekking club, walking club, consumer club, co-op committee... all sorts of nonsense except concentrating on getting good result for my SRP. I stopped my Tae Kwon Do training that year because the instructors at this school were from ITF camp instead of WTF. I was an idealist and loyalist, I guess... LOL
How was my SRP result? I only managed to get 5As and 3Bs. At least I can still return to study in MRSM instead of going back to a "normal" school. Huhuhu 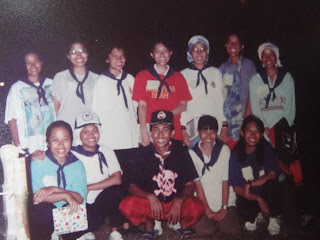 Me at 17, on a Girl Guide camping night. All happy faces because we won best performance or something that night.
I spent my Form 4 & 5 in Melaka, because I requested to study in MRSM Kem Terendak after Form 3. Why? It seemed like a good idea to study in an army camp at that time, that's why.
I got actively involved in Elocution & Essay contests. I don't mean to brag but I can write a speech on the day of the contest and still win something! Being a purveyor of obscure and useless information had its uses. That and the ability to spout out words in rapid speed. *wink*
There was one course that I emerged being a top scorer but I was completely ashamed of. I was a top scorer for "Munakahat" studies! That's a subject on Islamic marriage, peeps!
In my two years in Melaka, I probably spent a total of two weeks at home. My school holidays were spent joining one holiday camp after the other. Being at home for semester breaks that weren't aligned to my siblings' school holidays meant I would spend my time at home alone and not getting along with my Mom. My childhood friends were all at school too when I was on my semester breaks! So it makes better sense for me to be at school rather than stay home!
My most memorable time was as a facilitator at an English Holiday Camp. I chose the camp over being one of our school representatives for a Girl Guide international jamboree! I hate marching…
How was school for you? For me, other than the studying part - school was a blast. I get to do and experienced a lot of things at school, which I would never get to do if I stayed on in my hometown. I can’t learn how to sail a catamaran in my hometown, for one!
OK. Now that I’ve subjected you to a long-winded post, I might as well do something fun here. The first commenter who can correctly identify me in two of the photos above, get one of these two straps. Hint : except for one photo, I'm always in the middle. 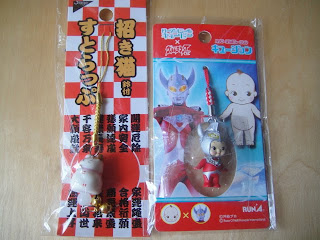 Wanna have a go? Please do. Good luck!
Email Post
Labels: Close to my heart Musings Rants and Ramblings