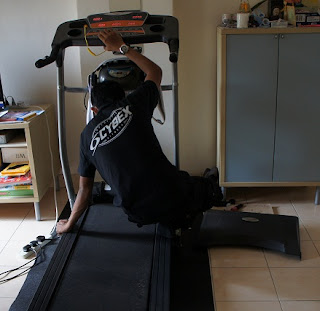 So the treadmill technician came on Saturday. It has been two weeks since my treadmill refused to work, but as I'm only free and at home on Saturday (last Saturday we had to go to Raimie's school), the appointment was only set for last week.
In the time being, I had to settle using the apartment's gym when it's not filled to capacity or if the weather permits, run around the apartment complex a few times at night. Not having my own treadmill to use at my own convenience meant that I have to fix a suitable time to do my running and not simply hop on the treadmill any time I like and it meant no running very very early in the morning or late at night too... (the two times you won't see me running alone outside). 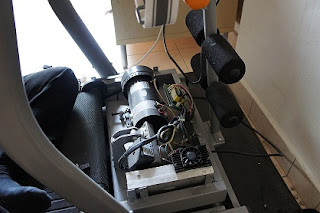 I had hope it was just the belt being worn off or something because that would meant a cheap parts to be replaced but it turned out to be a motor problem which can be expensive! I'm waiting for the quotation now and setting up another appointment for the technician to do the repair.
Buying a new treadmill is not an option to me, not when this one I had cost as much as a Modenas motorbike!
Email Post
Labels: Close to my heart Itchy Feet Rants and Ramblings