We were supposed to go to IKEA on Saturday, after picking up my 1 Vision Run race kit at Padang Merbuk but got somehow sidetracked. Instead of heading there early in the morning, we went to get ourselves a new washing machine. Our 13 year old washing machine finally acted up on us so it was time to change to a new machine. This, barely a month after needing to change our car's tyres. Cash flowing out like water. Uwaaaa!!!
So instead, the trip to IKEA was made on Sunday, after my 1 Vision Run.
I freshened up after my run at 1 Vision Run at Lake Garden's toilet, changed my shirt and then, off we went to IKEA! I hope I didn't stink-up the place too much! 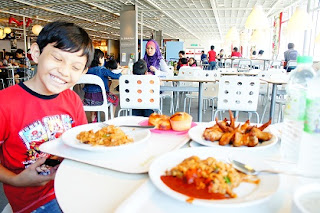 Breakfast at IKEA cafe - 99 sen sub-standard fried koay teow (why is it so popular, ah?), chicken wings and muffin & chicken soup and cinnamon roll for Mommy. We actually wanted to eat their meatballs, but I was already hungry at 10.00am. Was so not gonna wait long for my meal and so not gonna wait till noon! I got lotsa things to do at home too.
Bought two bookshelves from IKEA and then we made a trip to the Nike store at the Curve. 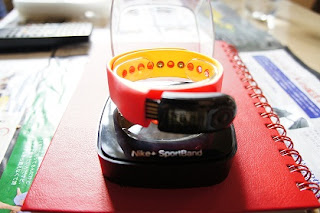 I mentioned that my Nike Sportband conked out early this year. Finally went and checked whether the Sportband can be repaired as it is still under warranty. We went to the store at Alamanda; where I bought it and was told they will replace a new one to me but the Alamanda Store didn't have any stock at the time. As we were nearby Curve on Sunday, I took the chance to go to the Nike store there and minutes later, I came out with a spanking new Nike Sportband. Wooohooo! Let's just hope this one lasted more than 5 months!
A 10km race, breakfast at Ikea, two bookshelves and a new (free to boot) Nike Sportband. What a great Sunday I had! Hope yours was great too. ^^
Email Post
Labels: Out and About Rants and Ramblings