or you can call it, "just for the heck-of-it" kinda run. I had no expectation of a "happening" race, joining the 1 Vision Run KL 2012 at Padang Merbok instead of the more popular, better publicised, much hyped World Kidney Run that was held on the same date and at a venue very near (Dataran Merdeka, if you must know) to this 1 Vision Run.

I am still not familiar with this popular race route in KL and the reason I entered this race was to familiarise myself with this hilly route. Hills, I certainly experienced a LOT yesterday!

We got there rather early at 6.30am (early by my standard that is) and I remarked how hardcore some runners are, already making their runs around the Lake Garden. Zaini just remarked dryly that I should marvel at the people who aren't running but still needs to wake up early on weekends (meaning him and Raimie) instead of those runners! LOL

By way of warm-up, I walked and jogged from our parking spot at the playground  at Lake Garden to Padang Merbok and back simply because the toilet at Padang Merbok wasn't open yet. I mentioned this is previous race posts, I need my toilet visit before the start of a race. Without fail. Good thing the toilet at the Herb Garden was already open. Imagine running with a full bladder. @.@ 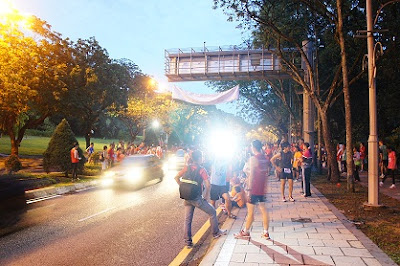 The Run was very much a small scale event and started rather quietly without much fanfare. Too quiet perhaps, that traffic was still allowed to go through the starting line that had runners already lining up to be flagged off. It is one thing that the organisers and traffic police didn't block the road yet, but it is another when motorists still force their way through a huge group of people and insisting their right of way. Ah well... 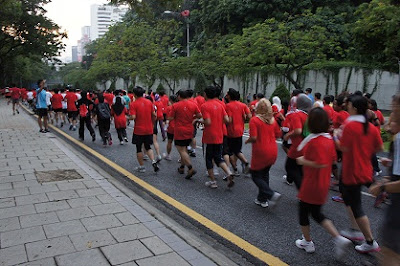 Follow the sea of red. That was my plan as I have absolutely no idea the route I was supposed to run. The World Kidney Run would be a "follow-sea-of-blue". It's important to distinguish this as both Runs had routes that collide at some point. Saw a fellow daily miler and waved hello to him at the starting line. Hi Kah Yen! ^^

I tried not to over-exert myself and since I had no idea how far I was running and what my running pace was that morning; I just ran without pushing too hard too early. I only pushed myself towards the last km, at the point where 1 Vision runners who were doing 10k and the World Kidney runners (3k and 7k?) converged and shared the same route. I guess by that time, it was already rather too late to do good timing for my run. No problem. I enjoyed my run despite the pain in one of my toes and the pain of a forming blister in my right foot. I used my much narrower Nike LunarGlide and not the wider Brooks Glycerin for this run because I like the firm feel and lightness of the LunarGlide but boy, this shoes of mine certainly can't take me far. No more than 8k. Anymore than that, I feel a blister coming. Guess this can used as a perfect excuse to get a new pair of shoes? No? xD

Apart from the glitch in traffic control at the starting line, the rest of the route had excellent traffic control, in my opinion. It was an experience for me to be running by the expressway with vehicles zipping by. I have to say I enjoyed this route a lot and definitely look forward tackling it again in the future.

Nearing to the first water station, saw a blogger and Ultra-Woman (she did a 50k solo run at The North Face Thailand. Respect!); Aini and hollered hello to her. But in my woozy state of mind, I called out her friend's name instead of hers. Sorry Aini! She totally left me in the dust after that. Boohooo!

No finishing photo of me this time because Raimie and Zaini wasn't expecting me to arrive so soon. In fact, they were just walking towards Padang Merbok again after spending time walking at Lake Garden (which I think is 500m away from the starting line?) when I called them after finishing my run. 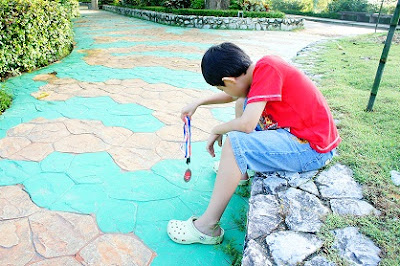 No finish line photo with Raimie this time, because Daddy and Son weren't there to greet me (bummer!), just a photo of Raimie playing with my medal while waiting for me freshen up at the toilet. As usual, I was soaking wet with sweat despite the cooling weather and shady route we had. 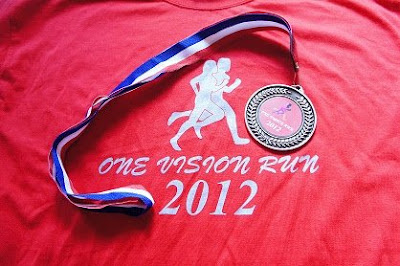 The red t-shit that I'll be using to wear while mucking around the house - it's those soft cotton t-shirt and the very ummmmm looking medal.

And just now, I realised that I have something to brag about.
Exhibit 1 - my bib number 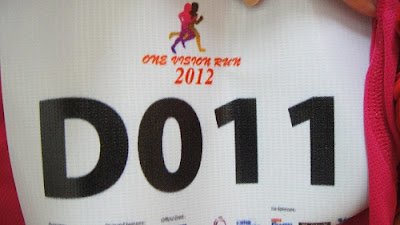 and here's the result for Women Veteran category, courtesy of Penonton : 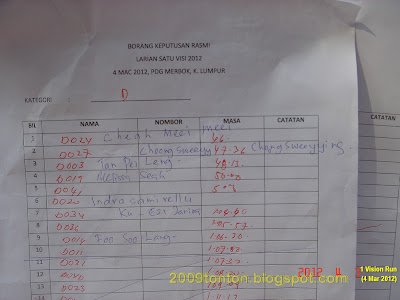 Can you see the D011 placing? Zaini just pooh-poohed the result by asking me how many Women veteran runner were actually running that day. Whatever. ;p


Didn't get or claimed the prize because I had no idea until a few hours ago. The finish line, the medal stall and the rest were a bit of a mess, I was lucky I can actually find my way to where I was supposed to collect my medal! A fellow lady runner asked me where she was suppose to report to after the run since the MC kept on reminding us to report and get our placing but I have absolutely no idea where we were supposed to go to. So I just went back looking for my husband and son at the carpark. xD﻿
Email Post
Labels: Itchy Feet Out and About Race Recap