Back To The Grind

So Ramadhan month is over. And now we're into the Syawal month.

May Allah accepts our fast, deeds and prayers during the Ramadhan month.

And now, back to the grind.

No more clocking in early to the office so that I can leave earlier in the evening.

And since I talk incessantly about running, back to training!

I have been rather lazy and managed to slink away from doing my LSD for the past 3 weekends (gasp!) while being completely aware I'm just 2 months away from my big race in September and I have 3 weeks of races lined up from this weekend onwards which will essentially serve as part of training for my September race.

Seremban Half Marathon on July 26th, just because I needed to do a 21K that Sunday.

Pink 50 which is organised by Pink Runners. An all-women ultra marathon event to be held in hilly Taman Saujana Hijau, Putrajaya on Aug 1st.

I'm using this event to gauge my ability to hit a certain cut-off times of a future race I'm entering so I'll be rather conservative running in this plus there is also another race I'll be joining the week after that.

I actually only needed to do a 4 and half hour run on the Aug 9 weekend but I figured, we're already travelling to Sungai Lembing so I might as well just do 50K. Hahaha

I'll try my best to finish within the 9-hours cut-off time. Admittedly, KOSL will just be a fun race for me. It will not be an easy race but I plan to have fun!

After those three weeks of races, I'll just do my runs at home until the first week of September. 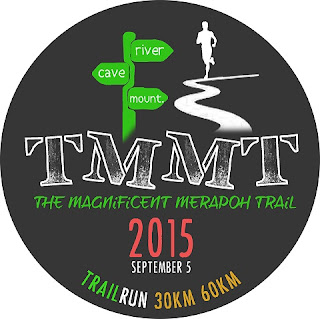 Then, hubby and I will be heading to Merapoh, Pahang for another trail run, The Magnificent Merapoh Trail (TMMT). But this time, we choose to do 30K instead of 60K.

TMMT will be a memorable run for us as it falls on our 16th wedding anniversary. ^^

Now, I need to buck up and be more serious with training and no more slacking off!
Email Post
Labels: Itchy Feet