I used both events as part of my training for SCKLM 2016 which I ran in the half marathon category (didn’t managed to get a PB though but I was quite happy with my 2:27 finish). For 2017, I’m training for the full marathon. 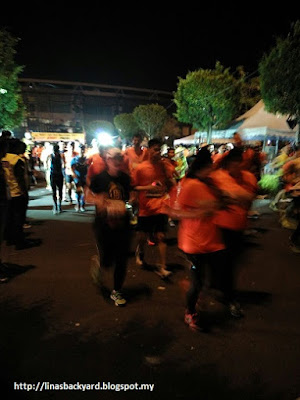 So here I was, at the starting line of Bukit Jalil Half Marathon. Again. With the intention of just going out for an easy paced run.

The route was somewhat different from 2016. It was back to being flagged-off at Bukit Jalil National Stadium (it was at Bukit Jalil Park in 2016). And as the venue was bigger, all categories of 21K was flagged off at the same time this year. It was female first, male 15min later last year. (Taman small mah, cannot let off everybody running at the same time).

Due to the crowd and the fact that I started rather way behind, the first 6K was a slow one because I was pretty much running following a crowd. That and also because there were quite a number of really dark stretches. I was afraid I’d tumble into something so I was running very cautiously.

Skipped the first water station but stopped at the second water station at KM6 mark, where the surau tent was located. The water station seemed undermanned (or overwhelmed, I dunno) and volunteers were still trying to “susun” cups while runners had to wait.

One runner even helped to set out the cups and I went behind their table to open the mineral water boxes to get some bottles out and help pour water. Generally wasting time as usual lah… Hahaha

At the third water station (KM9 thereabouts) runners were served bananas alongside mineral water and isotonic. I didn’t take any isotonic drinks and just grabbed a cup of mineral water.

I think it was at around KM11 that we start seeing a loooong stretch of incline and as I was running, I was like “this look like 2012 Newton Route”. And yeah, got that one incline where you go up about 800m, then you thought the hill would end, turn into a corner, and go up again. Verrrrrry nice. *pant pant*

Distance markers were placed at every KM and cones were set up along the route. The Bukit Jalil Running Club sure has a huge stock of traffic cones available! Muahaha

It really helped me to take note of the distance with the consistently placed distance markers as I made a conscious decision not to look at my watch until I reached KM15.

Police traffic, RELA members and traffic marshals were great too! I seriously think that uncles and aunties (who are runners themselves) make great crew. They are energetic and enthusiastic and they really cheered you on. (Younger crew and volunteers tend to be quiet and like to look at the smartphones more).

Excellent traffic control at Bukit Jalil Half Marathon. Thumbs up to everyone!

Anyways, it was at KM14 water station that I started to look at my watch and stopped to take a gel. Apart from the one gel and sips of mineral water during my run, I just sucked a few barley mint sweets.

I got to KM15 at 1:46 which is a minute faster than 2016’s 15K point. I was running pretty much by feel until this point and looking at the timing, I kinda figured I can try make it to a 2:30 finish. This is despite the initial plan of running easy and finish within 2:45. Hahaha

I have like 43 minutes to finish the balance 6K and push for a 7’ish pace. So says the brain la…

The next 3K was a slow 22:18 due to some hills and the general drama of not wanting to push on hills. A few walk breaks which I shouldn’t have done and that cost me time. That and not being able to resist stopping at water stations, even the one that was placed a mere 1 mile away from the finish line! (Yeah, I could probably skipped it and not die of thirst but the guy there was holding a few cups ready for runners and I didn’t want to disappoint him by not taking one. Muahaha) 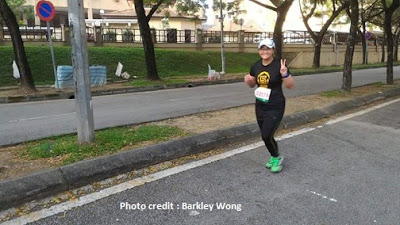 After a final incline and about 200-300m from the finish line, a guy in 2015 Twincity Marathon tee urged and encouraged us to push for the final dash to the finish line. I managed to do the final 3K plus in about 21min plus. Can la, since it was a decline. *lega* 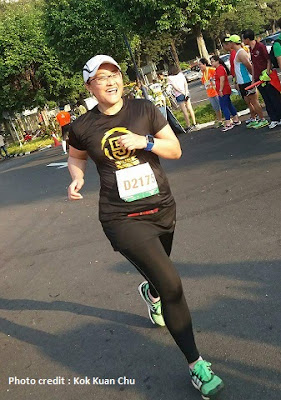 My official nett time was 2:31:05 and I was quite happy with it initially. But hubby, who was waiting for me at the finish line just remarked “you were lazy, weren’t you? You could’ve gotten a 2:30”.

Despite Bukit Jalil Half Marathon being a part of my training run, I didn’t want to take any chances with fuelling and gear. I put on everything that had worked well for me in previous races, my 2ndskin black tee, my usual white adidas cap and I ditched my my newer Adidas UB which I had worn during Twincity Marathon for an old green adidas EB, and with my trusty Thorlo socks. And I did not drink a single drop of isotonic just in case I get tummy discomfort.

Pre-race fuelling was a cup  of hot oat drinks, charcoal pill and gastric medicine. ^^!
Race fuelling was 3 pcs of Torrone barley mint candies, mineral water at 7 water stations and 1 energy gel at KM14. The same brand as the one I took at TM Fan Run where I PB’ed my HM.

It worked well and not having the pressure of watching my pace made the run quite enjoyable. Should’ve pushed for that 2:30 then I’d have sweeter memories of Bukit Jalil HM. Hahaha

I probably will register for the 2018 again as I really like the route. And the taufufa and watermelons served for runners after we finished.

So, see you in 2018?
Email Post
Labels: Close to my heart Events Itchy Feet Race Recap