This year, Bangi Wonderland Nature Run was held conjunction with its 2-years anniversary, on  Oct 7 2018. It was a nature run held inside the nature forest reserve for 10km (20% flat road & 80% off road inside forest reserve) / 3.5km Fun Run.

For our entry, all registered participants also received one Complimentary entry ticket to Bangi Wonderland Theme Park. The theme park entry ticket expires on 7 December 2018 so we have some time to utilise it.

Some had used their entry tickets during REPC day at Bangi Wonderland on Saturday (the day before race day), some used it after running in the Bangi Wonderland Nature Run and some will use it later, I suppose. 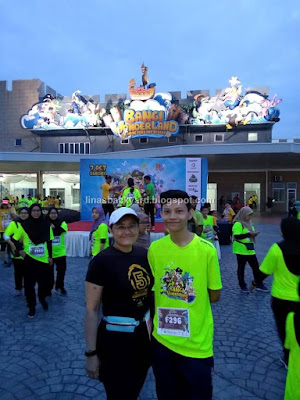 Race day morning started promising enough. There was a slight drizzle before flag-off but nothing for us runners to really worry about.

I started at the back and as I ran, I started gaining on other runners and was feeling great while cruising on the downhill and uphill section.

Alas, it didn't last long. I rolled my ankle as we were running in the trail section and I stopped immediately due to the excruciating pain and went looking for the race marshall.

I was still laughing (in pain) and runners who knew me kept saying hi so I guess the marshall couldn't quite believe I was in pain.

I was told to wait until all runners had passed through before he could call for medic assistance (the SOP, I suppose) and it looked like I had some time to wait. Fortunately, a 4WD medic passed by before the fella made his phone call and I managed to get a ride on it and head back to the start line. 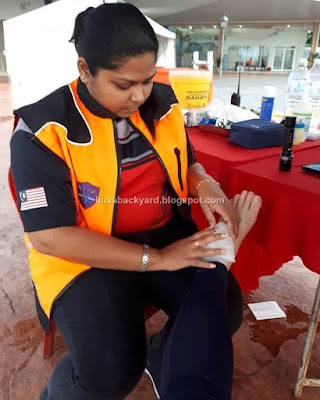 I wasn't assisted getting on the 4WD but the medic at the Start/Finish Line assisted me to walk to the medic tent and they were simply great and attentive in looking after my ankle. It was starting to really get swollen by now and having ice put on it was a rather painful (but necessary) exercise.

After a while, the medic put on some cream on my foot and let me rest at the medic team. They were quite aghast when I stood up and started walking.

I wanted to take photos of runners arriving so I told them, I'd park myself at the grass section just behind the Finish Line. 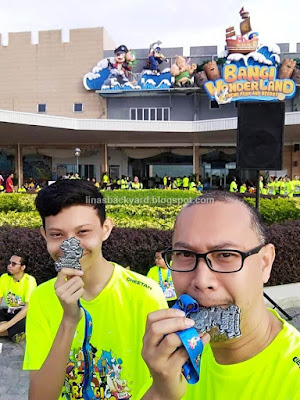 Hubby and Son finished soon after, and after we had our fill of nasi lemak and watermelons provided by the organizer and also after we had taken some photos of the arriving runners, we head back home.

The medal is so CUTE, right?
But not before a selfie with one of the podium runner of Bangi Wonderland Nature Run. Congrats Farid on your 5th placing!

My injury notwithstanding, it was still a great morning out. Son & Hubby enjoyed their run. I enjoyed meeting up friends, getting ribbed by the playful emcee and also taking photos plus it was an experience to have to look for medic for the first time during a race.

Later, as I waited for Hubby to bring the car around, another medic came by and gave me some tips to care for my ankle.

CentriSohMy and the technical team, Pacemakers Malaysia have a great track record in handling races and this one was no exception.

They'll be having another run soon called Precious Run 2018 and will be held on Dec 16, 2018 at Tugu Negara, Kuala Lumpur. I do hope I recover in time to join that run!

Some photos taken during Bangi Wonderland Nature Run 2.0 can be viewed at our Cik Arnab & En Kur-Kura Facebook page. It's not high quality though but we hope you enjoy looking at it!
Email Post
Labels: Close to my heart Events Gardens and Parks Itchy Feet Out and About Race Recap