THE NORTH FACE – MALAYSIA MOUNTAIN TRAIL FESTIVAL 2019 SEES OVER 2,100 RUNNERS TAKE ON THE FOREST OF TAIPING

THE NORTH FACE – MALAYSIA MOUNTAIN TRAIL FESTIVAL 2019 SEES OVER 2,100 RUNNERS TAKE ON THE FOREST OF TAIPING

TAIPING, 16 December 2019 : The North Face Malaysia Mountain Trail Festival 2019 (TNF-MMTF 2019) flagged-off with a bigger turnout this year where over 2,100 runners from 35countries converged in Taiping, Perak for the competition from 13-15 December 2019.

TNF-MMTF offered four routes for trail runners (13KM, 25KM, 55KM and 84KM) to test their physical endurance at the pristine yet challenging trails of Taiping with various elevations of 610m, 1,440m, 3,250m and 5,290m respectively.

The 13km run, suited for beginners, was known as the “Freshman Run”, while the new 25KM run was known as the “Ball Breaker Run”. The TNF-MMTF also offered two versions of the Ultra Challenge which are the 55KM and 84KM.

The 25KM, 55KM and 84KM race courses are certified by the International Trail Running Association (ITRA) and have been added into the list of qualifying races for the world-renowned Ultra Trail du Mont Blanc (UTMB).
Kristian Joergensen, 35, from Denmark was winner for the 84km Men’s Open category after crossing the finish line with a time of 10:22:24. The Danish athlete said, “I feel really good (about winning), because it was the finale of the ATM Championship series and there were a lot of good runners. So it came as a surprise for me that I won it. I knew I trained well and I was in good shape, so I gave it a go and it feels really good. The course was really tough, but also really special and beautiful because you are going through the jungle and forest. The most beautiful experience was when the sun started to rise and the animals woke up, you could hear the sounds from the birds as well as see the animals roam around their habitat.”

The winner for the 84km Women’s Open Category was Veronika Vadovicova, 29, from Slovakia with a timing of 11:34:42.

After its successful inauguration in 2018, trail running is not the only agenda on TNF-MMTF, which aims to congregate the trail running community from around the globe through music and food as well at the official venue, Spritzer EcoPark.

“We had an amazing turnout this year, and we are proud of all the runners who have made it up here to Taiping as well as completing the race. Out of the 2,100 runners, more than 1,800 of them were Malaysians. This is a testament that more Malaysians are embracing an active lifestyle and travelling locally to experience the beauty of their homeland,“ said Ewegene Tan, the organizer of TNF-MMTF from MMTF Consultant.

TNF-MMTF is also the Season Finale for the 2019 Asia Trail Master (ATM) Championship, where the new ATM Champion was also crowned in Taiping. This has enhanced the standard of “ultra-trail” running to a higher level in Malaysia, as there are several title contenders, including a few Malaysian runners, who have been competing for ATM points throughout the year in 14 Asian countries.

John Ellis, 41, from Australia was crowned the new men’s Asia Trail Master Champion for after a year-long of racing. “I am pretty ecstatic and also pretty tired. It’s been a long season. I did 9 races in the end; the competition was so strong and you could never relax. You need to perform at a super high level at every race just to be able to get the points’’, said the elated John Ellis.

Veronika Vadovicova from Slovakia, who took won the TNF-MMTF 2019 84km Women’s Open, also collected enough points to seal her position as the new women’s Asia Trail Master Champion. While containing her excitement, she said “I am super, super happy about the victory of both. Yesterday’s race was probably my best race this year, so this sums up the year perfectly. The course was very challenging and technical. It had a lot of climbing, but it suited me really well so I enjoyed it the whole time.”

The organizers of TNF-MMTF were also eager to promote the state of Perak and Taiping, once ranked Top 3 Sustainable Cities in the world, as a thriving social economy.

Dato’ Chuah Chaw Teo, the R&D Director from Spritzer, who were also the Venue sponsor and Co-Organisers of TNF-MMTF 2019, said “Spritzer is very delighted to be a co-organiser of this prestigious event where we have 35 countries participating from all around the world here. Spritzer has always believed in sustainability, and this TNF-MMTF aligns very well with our core value of sustainability; harmonising with nature as well as the surrounding. This is our aspiration to let the public know that we have a Corporate Social Responsibility to want to protect the environment and ensure that whatever we do is to protect the nature and harmonise with nature. That is why we have invested in Spritzer Ecopark which opened to public in 2015 to enjoy the nature and environment.”

Yang Berhormat Tan Kar Hing from Perak State Exco of Tourism said: “We would like to congratulate TNF-MMTF for another successful event this year. It was truly a lively festival, and we are proud that TNF-MMTF has put Taiping, Perak on the tourism and sporting map.”

Tuan Roslee B. Ahmad Rafie, Manager of the Bukit Larut Tourism Centre under the administration of Majlis Perbandaran Taiping said: “With TNF-MMTF returning to Taiping, we are proud to call it the home to trail running. Taiping is a unique tourist destination with lots of pristine nature, and we hope that everyone enjoyed themselves.”

As part of its CSR efforts, TNF-MMTF pledged their support to the Perdana Global Peace Foundation – an anti-war movement and initiative of global peace – through trail running this year.

Tan Sri Norian Mai, The Chairman of Perdana Global Peace Foundation said: “Trail running events like this brings people and communities together. We would like to thank TNF-MMTF for giving us a platform to champion our cause and message of world peace.” 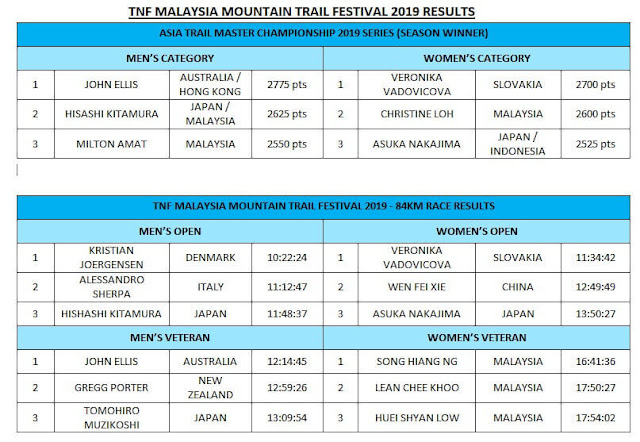 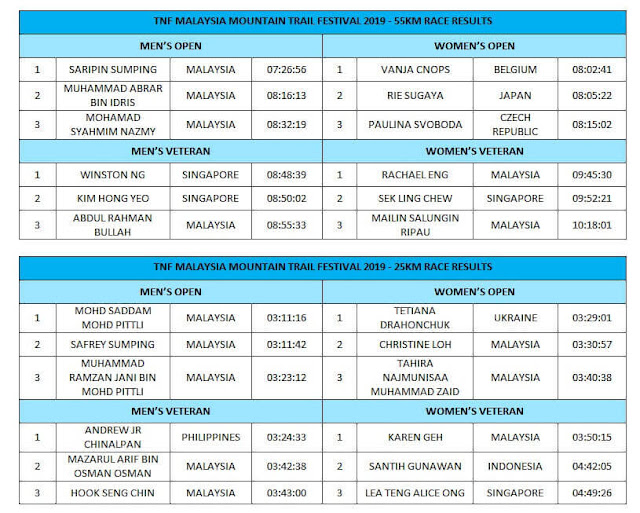 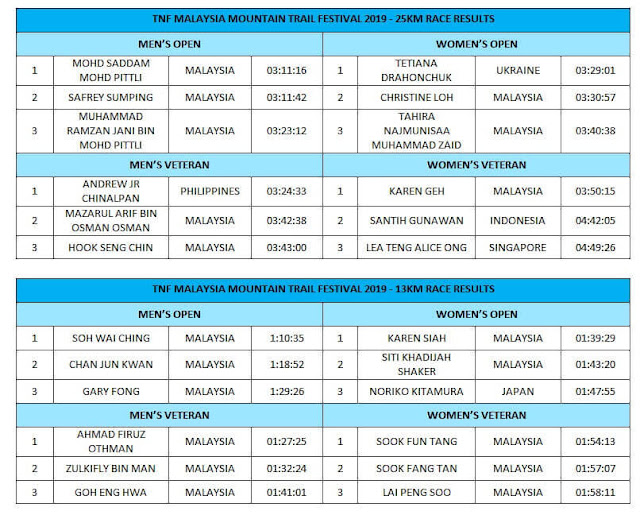