How was your weekend? We had a three-day weekend because Deepavali fell on Friday this year and I sure was looking forward to a long lazy weekend.
We went to a Deepavali open house on Friday that was hosted by one of the Heads in Zaini’s office. I remarked on Facebook later in the evening that it felt like I was attending a Raya open house instead of a Deepavali do because of the mainly Malay Muslims guests there. The menu was diverse too, catering to all taste – there were Tosai, Mee Rebus, Nasi Lemak and even pizza! 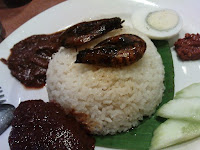 I somehow got gastritis later that evening (I suspect it was because I ate white bread earlier that morning. I have to be careful not to consume too much white bread because the acid in my stomach will act up) and was having cramps and purging from Friday evening till Sunday. And to top it off, I usually only like going to the same doctor for my ailments and my doctor is on Deepavali leave! Ugh!
Ever since we got ourselves a Nintendo Wii, both Zaini and Raimie are monopolizing the TV. Did I tell you I don’t play video games because I simply have no patience for it so I didn’t join the Wii bandwagon with the two boys. I guess the only way for me to watch TV without having a heated argument with my son is to install another TV in the living room. Imagine having two TVs side-by-side in our small living room. LOL
On Sunday, we camped out at a newly opened J.Co outlet at Jusco Cheras Selatan, enjoying the free wi-fi while having donuts for dinner, Yes, donuts for dinner! Eating donuts for dinner can be an expensive affair. A two-dozen baby donuts with two ice-blended coffees set me back RM40++.
Raimie did us proud again. We received his Religious School’s year-end exam result and he managed to bag the top spot in his class again this year. His overall percentage is lower than last year but still, we are happy for him. But judging by the percentage, I think he won’t be getting best overall student prize like he did last year.
I’m taking a day off this Friday. Zaini and I will be going to his Primary School on Friday to pick Raimie’s report card and I sure hope he doesn’t slide from getting at least second place in his class.
Then, after getting his report card, we’ll be heading to Penang. Yeay!

Zaini has some work in Penang this weekend, and this time around Raimie and I can tag along. Free trip for us to Penang and a night’s stay in a nice hotel. Double yeay!
Email Post
Labels: Celebration and Holidays Makan Time Out and About Rants and Ramblings School