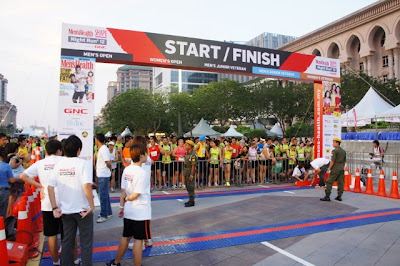 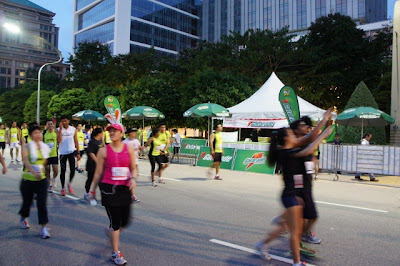 I entered the pen about 15 minutes before the flag off and stayed somewhere in the middle. A lot of runners were pushing through to get to the front, which I don't usually mind unless I get elbowed. You elbow me or you step on my foot, you better run faster than me ALL through the run, you hear?

With plenty of time before the start, I could hear people talking smack about their running escapades. Two things that I have a bit of pet-peeve at : those who can barely run but insisted to start way up front and clog up the route & people talking smack loudly so everybody can hear them.  I run, you run. What's the big deal?

Anyways, the start was slow. I walked the first few meters and crossed the starting line 1 minute and 58seconds after flagoff. The first 2KM was too slow because of slower runners (I am a slow runner, but there were a whole lot of slower runners in front of me!) and walkers. Don't start at the front if you know you need to walk in the first KM. We are not going to get that podium finish lah.... let faster runners go first. We can take our time and not hog space. Do you think your PB is going to be affected that much by starting at a more appropriate starting point i.e. not in front? I avoided to do much dodging so I was running with the crowd but had to be careful about runners who like to make sudden stops. That's another peeve : people making abrupt stop. Kacau my pace only. (That and sometimes, people can run into you. Dangerous!)

I know I was going to suffer a bit doing this run. I initially wasn't planning to do this run at all. I didn't even register for it. I ran that night wearing somebody else's bib which I got at the last minute.

I managed to coax my legs to continue plodding along the route despite them screaming that they were tired and didn't stop at all until the 8th km. Then, I happened to look up and saw an inclince. Crap! Here's a tip. When you are running and you have mental strength like a soft cheesecake (like I do), do not look too far ahead. Just focus to a few meters ahead of you. It helps. I managed to do that for 8K, but focus waned when I saw that dratted incline and also a runner lying by the roadside, being assisted by a few other runners and a traffic cop. 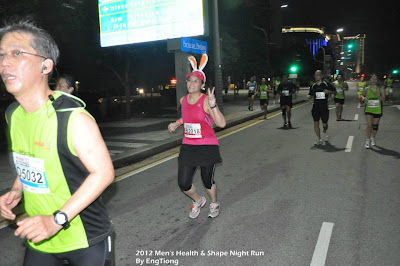 Bunny was tired but its ears perked up when it saw DSLRs with huge lens pointing at it. Thanks Tey for the photo!

I felt funny after the 10th km, alternating between feeling cold and warm (seram sejuk, as Malay would say) and a bit woozy in the head too (running on an empty stomach can do that to you) so I decided to chicken-out a bit and walked. The problem with walking is, you tend to walk more than you should. And I did that. I'm such a wuss! 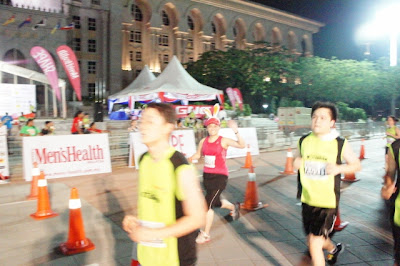 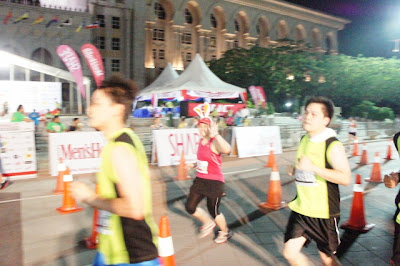 Wave Wave. Wave here. Wave there. Haha. Always happy to get to the finish line.
1. because the run is almost over.
2. There are lots of photographers there.

Nothing like seeing photographers to change your walking to running! LOL 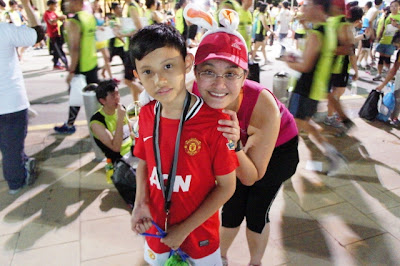 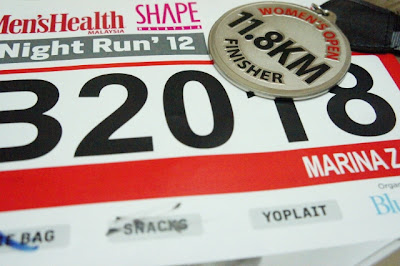 A borrowed bib but the medal is MINE! I got no. 254! Terrible! Wakaka... Barely managed to get that medal because they only gave out 300 medals for Women Open category.


That said, despite needing 1 hour and 30 minutes to finish a 12.3K run (the organizer tipu! They advertised the run as 11.8K. Where got!), I was happy running this. Also, met a gentleman while queueing for my snacks. He allowed me to queue in front of him even though I was patiently waiting to join the queue- actually it was more like looking blur & lost and not sure where the queue end; and later pass me his bun (that sounded so wrong. hahah) because I wasn't given one yet. Thank you for your chivalry and your warm smile, man in black t-shirt! ^^

Gave the Milo van, the Yoplait booth, the Gatorade booth, the juice booth, etc a miss because the two boys were too tired and can't wait to get home.

Anyways, I'm noticing that if Gatorade is the isotonic drink sponsor, you won't get Gatorade at the water stations... only at the finish line. Happened during my previous run where Gatorade was the main drink sponsor. Is my observation correct? So "kiam siap". kakaka But then agan, like Zaini said, Gatorade more expensive than 100-Plus so cannot give out indiscriminately. True also lah...

Raimie's Sport Day in the morning that Saturday and then Momm'y "sports day" at night. We sure had an active day last Saturday!

p.s. Bunny is thinking about morphing into a cow for her September Salomon X-Trail run. After all, we will "kacau" the cow's area for the run at UPM, right? All the cow at the field would sure be shaking their head in disbelief at the few thousand silly humans there, come Sep 30th! LOL

Now... where can I find a pair of cute, floppy cow's ears?
Itchy Feet Race Recap