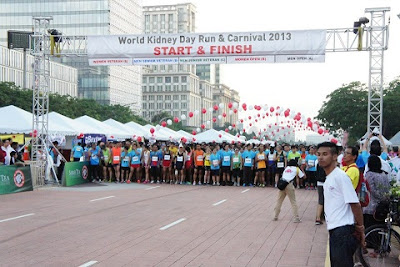 At the World Kidney Run & Carnival 2013. With the 12KM run starting at 7.30am in Putrajaya, expect a scorching hot run. I would know. I'm used to running around this area from 8.00am to noon.

Actually, I was supposed to do the Bidor Half Marathon, which clashes with this event. I had registered for the half marathon early on but decided to bail out from doing it and at the last minute, registered myself to doing this Kidney Run instead.A blessing in disguise as I had been plagued with foot injury for the past week and had really low mileage.

Quite a number of runner friends went to Bidor so I wasn't expecting to meet a lot of friendly faces at the run. Though from what I heard, those doing Bidor suffered the heat too! 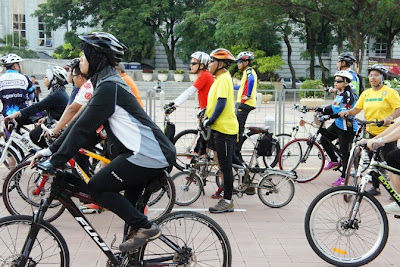 The World Kidney Run & Carnival 2013 had not only a 12KM run, but also 5KM fun run, 22KM fun ride and a category for transplant patient & organ donors too.


The once-a-month Kayuhan Ceria organised by Putrajaya Corp was also held today so Presint 3 (in front of Palace of Justice) was abuzz with activities. 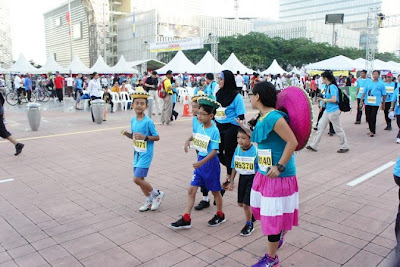 The 12KM run started right on time, and at 7.30am off we went under the already sunny, cloudless sky. Instead of starting last as I usually did in previous runs, I started somewhere in the middle this time. Still, the road was congested with runners and I took it easy until I reached the Seri Gemilang bridge.

I wanted to try the breathing rhythm technique which I read about in Runners World (I should totally get the book "Running On Air" and read about it further) so I tried running without peeking at my Timex to check my pace and ran with gut feel instead, focusing on inhale three strides, exhale on two. Focus. Focus. Focus. For a while only lah... I'm like a goldfish. Short term memory loss one. LOL

It was a hot day, and I ditched my earlier plan of only stopping at the third water station. Instead, I stopped at all water stations to prevent dehydration. Did I mention it was a HOT day? Scorching hot! @.@

I promised myself to run up to 8KM and only after that check on my pacing. I guess, on a hindsight, it was a bad idea. I saw that I was running at a faster pace than what I'm used too, and reaching the incline at around 8.5KM (?) I decided to take it easy and walked. Really bad idea because once you stopped and walked, you kinda ruin your momentum and it was harder to start and keep pace after that. 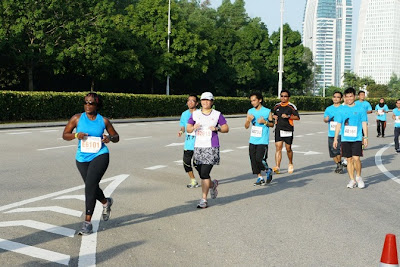 Me approaching the check-point, at KM6. Not only did I not do my usual "start as the last runner", I also did something I've never done and that's wear a running vest from a race. I've never worn an official running vest to a road race before. ^^

By KM11, saw some guys distributing flyers. They were for the 10K Gaza Run. The Run is for a good cause, but why are the flyers being distributed to runners who had yet to finish their run???!!!!!  Distribute it after the finish line lah, like the Mizuno Wave Run flyer guy did! We are already exhausted, and these people want us to take the flyers and hold onto it until we finish. Crazy ah?

Finished my 12.2KM (according to my Timex) at 1:27:50, and managed to get hold of one of the limited 250 medals for Women Open category. *wipe sweat* An improvement I guess, compared to my previous run on the same route at Men's Health & Shape Night Run last year. 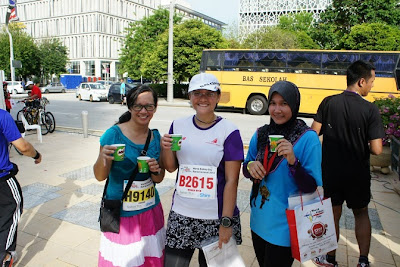 Me, Gai and Bett after the run, enjoying cups of Milo. Had a few cups of 100-Plus too. I decided to skip the free ice cream queue because it was too darn long. 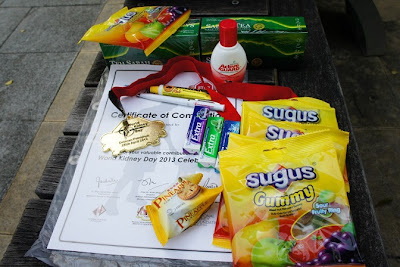 Had a "WTF" moment when I was collecting my goodie bag. A volunteer (a guy who looks like he's well over 20s) called me "auntie" and asked for my goodie bag coupon! AUNTIE????? Wei, my bib showed clearly that I'm in Open category la wei!!! It's one thing to be respectful, but it's another to be "too" respectful that you are actually rude! I guess I looked really old lah. Wuuuuwuuuwuu

For a RM35 registration fee, World Kidney Run is sure generous. A Brooks tee plus this nice goodie bag filled with a small bottle of shower gel, an anti-inflammatory cream, a pen, chewing gums, Sabah Tea and Sugus gummy. We had extra packets of Sugus Gummy and Sabah Tea because a Bangladeshi cleaner had a goodie bag coupon and asked my help to redeem it. He then gave a packet of the sweets and tea to Raimie. :P

Also, a BIG THANK YOU to the organiser and all of the volunteers. Thank you for making the event run so smoothly. For those manning the water stations and the ones giving out medals and the girl who helped me take off my bib to put in the lucky draw box - THANK YOU, THANK YOU, THANK YOU for "suffering" under the hot sun for us runners.

Now, on the next race PLEASE!