I wasn't supposed to do this 21K run at AIA Men's Health Women's Health Night Run on Saturday night as I was supposed to be in Merapoh, Pahang doing 30K at The Magnificent Merapoh Trail.
See my name on the banner? Huhuhu

If any of you guys saw a runner sporting the bib under my name, don't throw a hissy fit. The organiser allowed legal bib transfer and I already informed them of me not being able to run in TMMT.

And there I was, going to Putrajaya on a Saturday night for a road run instead of a trail run in Pahang. And running in the rain. 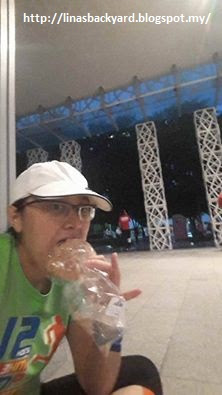 Misjudged traffic condition and the initial plan to have dinner was scrapped off and I was getting hungry while being stuck in the car getting to Putrajaya.

We arrived shortly before the Maghrib azan was heard and I had just enough time to eat and digest a bun. For dinner.

Didn't manage to meet up with any friends before the flag-off and I started mid of the pack this time.

There wasn't any concrete plan for the run as I had no target for this "training" run. I actually kept flip-flopping between a 2:30 finish or maintaining the pace I did at Bukit Jalil Half Marathon which was a 7:10.

The start was congested as there were quite a number of runners in front of me and my first plan was to catch up with the 2:30 pacers.

I felt I was running quite fast for my liking but I thought if I hadn't caught up with the 2:30, it should be OK.

The thing about holding too fast a pace is that, the second half may get ugly and it would be hard to maintain a certain pace.

One of the 2:40 pacer's balloon popped as I caught up behind them. I then ran ahead fully intending to catch their 2:30 pacers but can't see them even after running 6K.

I mentioned it to a runner and he told me that the 2:30 pacer balloons had popped too. (AIA you buy cheapo balloons from where ah?)

At one WS, where there were like 3 bottles of Lucozade available and yet to be opened so I resorted to opening and pouring them myself (and sorting the cups too since they weren't unpacked from the plastic yet). Oh yes, to the WS supervisors... can you please brief volunteers not to fill up water/isotonic full up to the brim of the cup next time? One - to avoid wastage (we don't need to drink a full cup dey) and also avoid splashing drinks on ourselves.

The first 12K was uneventful, and it was at the second WS that I bumped into a fellow GC runner. We ran together, most times he was slightly in front of me for the next 11K if I'm not mistaken before I lost him.

There were a few dark stretches along the route and I wonder why the organiser chose the unlighted section for the KM13-15 section and knowing that it would be VERY dark, didn't provide any "assistance" such as temporary mobile lights, etc.

I'm sorry but for RM98 registration fee for a 21K, I think they could afford 1. better balloons. 2. purchase Daiso RM5.30 lights.

I guess hunger (for just getting a light dinner) and trying to compensate that with sugar fix (I was popping in sweets and downing energy gel) and also running a too fast pace for the first 3K took a toll on me and I started having walk breaks from KM16. I had gotten to KM15 in 1:44 which was an average pace of 7min/km having slowed down to a more reasonable pace after KM4 onwards.

But KM16 onwards, the pace steadily got slower after that. HAHAHA

Dark stretches and running together with the 12K runners made me either slow down to  a slower run or walking breaks. And I was happily sashaying and chatting with a friend who was manning the CP timing mat at KM17 (or thereabouts). LOL

A complete opposite from TM Fan Run where I actually ran a 6min pace for the final KM with a friend, I only jogged to the finish line this time. 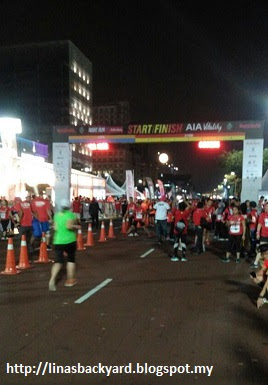 Approaching finish line with hubby waiting for me. A crew was seen busily asking runners not to block the finish line with their photo taking and selfies to allow runners who are finishing to pass through.

Took my medal, a bottle of mineral water and joined the loooooooooooooooooong queue for the goodies bag. Again, for RM98 - I would have expected more than free packs of Petron tissues, Lucozade and the goodie bag after my run.

Banana ke, apple ke would be nice if they really cannot afford (or feels we runners are already too damned pampered) to be given a snack pack macam TM Fan Run did (that one I paid a measly registration fee of RM55). 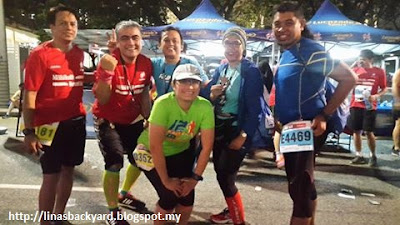 Lepaked a bit with some friends after the run an was looking for Shuhaimi afterwards. Turn out he didn't bother to join the goodie bag queue as it was looooooooooong but hubby managed to meet him.

Thank you again Shuhaimi for the company during the run! 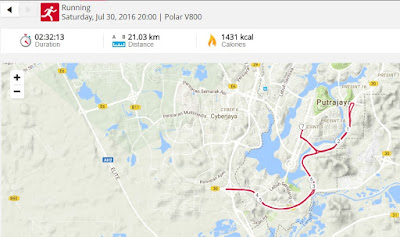 I'm using the experience and the feel of MHWHNR 2016 to strategise for next week's SCKLM. One, maybe I should forgo following a pacer if pacers are running way too fast from what I am comfortable with for my target timing because I have absolutely no intention in running a 6:20 pace again unless I want to target a sub2:15 HM.

But then again, runners (like most Malaysians) have really short memory. LOL

Anyway, I wonder if the run going to have another cheap sale 50% off for their Johor run like they did for Putrajaya? Though I seemed to miss the memo on the 50% promotion earlier.
Email Post
Labels: Events Itchy Feet Race Recap Rants and Ramblings