BOLTMOJI, THE NEW WAY TO MESSAGE FASTER Now available and ready to run.

The 2016 Rio Olympics is just a couple of weeks away, and global sports brand Puma is backing its ambassador Usain Bolt aka ‘the world’s fastest man’ with the launch of "Boltmoji."

"Boltmoji" is an emoji keyboard featuring the Jamaican sprinter, who's regarded as the fastest man in the world, which resulted in his "Lightning Bolt" nickname. 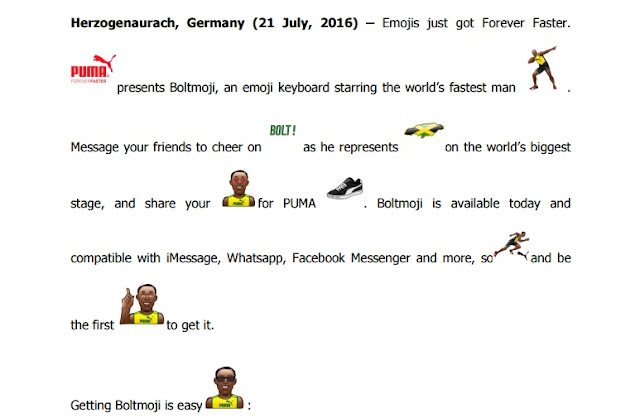 In the Apple or Google Play Stores, search for “Boltmoji” and download the application.

Once downloaded, open the app. You will be prompted through several set up screens to install the keyboard. Start using the keyboard “Boltmoji” in your iMessage, Whatsapp, Facebook Messenger, WeChat, etc.

Emojis just got #ForeverFaster and it’s time to run with them, so download the app and get ready to enjoy.
Events Promo