I signed up for TM Fan Run (TMFR) 2016 early, with the intention to use it as part of my training mileage for the upcoming Standard Chartered KL Marathon (SCKLM) which will be held three weeks after TMFR.

There wasn't any fast target for the run initially, what with it being held around 11 days after the Hari Raya but after a few sessions with my running kakis, the Gaited Community (GC) during the Ramadan month at Bukit Cinta, UM and someone racun more people to join TMFR; suddenly there was an aim for a sub2:30 being discussed.

Bismi had so kindly offered to be the 2:30 pacer and quite a number of our gang were excited to run within that time for a 21K. I was quite hesitant to join at first as I only wanted to do my LSD but later decided, why not. If I can't cope with the pace, I'll drop and finish it at my target easy pace but if I could follow through, it would be a great motivation for SCKLM. The others too were getting ready for SCKLM; some will be running in the FM category and a few in the HM category. 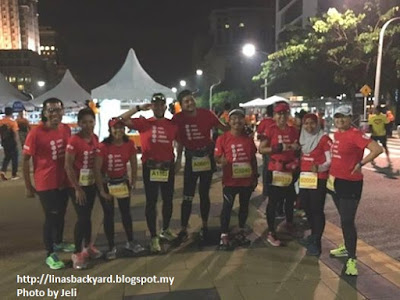 Bismi (left) and his pacees in team GC. Bar one - the one beside Bismi is a fast sub2 runner. ^^

Included in the gang was Farah, a runner imported from Australia who is back for the Raya holiday and the gang was later joined by a few more GC members who did a few extra KMs before TMFR 21K flag-off.

We started our run late, after the 6.00am flag-off for Subuh prayers and also for toilet stops so we ran at the very back of the 21K runners. 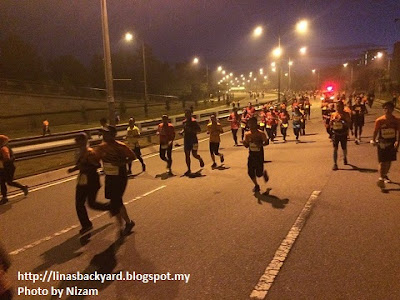 The team following the Bismi bus.

Bumped into a friend, Doc Rafidah at around KM6 and she advised me about my running form. She had told me earlier that she just want to run slow and finish in around 3 hour but she is such a fast runner; her slow run at TMFR was a 2:35! Hahaha

We ran in our group and followed Bismi's lead and the pace he had targeted for us to do. It was quite fun and during the first 10K, we chatted, laughed and joked around as we ran. I was quite pleased to note that I was able to get to KM10 in 1:07:36.

I somehow got ahead of the group after KM10 but Bismi and Jeli, with the rest of the group caught up with me as we were climbing upwards to PICC.

With 7K more to go, we merged with the 10K runners at the foot of PICC hill and the road became more congested from there onwards.

Mindful that I have 7K to go, I followed the group until we got to KM15. I got my 15K PB with the timing of 1:42:58 and was quite happy with that, especially as I had a target of 1:45 for the 15K section. Bismi told me to go ahead as the remaining route will be easy and I did. 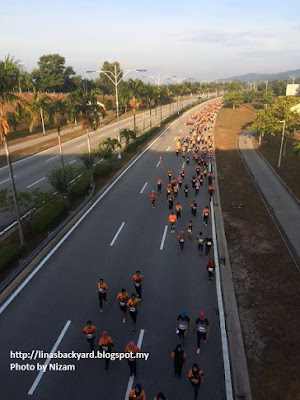 Slowly breaking away from the group. Can you spot me? :P

I didn't really have anything targeted at this time, I just ran and tried my best to maintain my effort while zig-zagging to pass the 10K runners who were sharing the same route as the 21K to get to the finish line.

Another runner; MJ who was doing 30K that morning (9K before TMFR plus 21 at TMFR) passed me at around KM17 (before the 2nd last water station) and I decided to follow his lead and ran behind him.

I later learnt that he had targeted to run a 7min/km pace for 30K so him holding a 7min pace was just nice for me.

Although the road was by now congested with both 21K and 10K runners, I did not mind the crowd at all.

With like 400m to the finish line I was running like I was busting my lungs but Azmi told me to finish strong. I had wanted to slow down but he was right beside me so I continued running till we crossed the finish line mat. 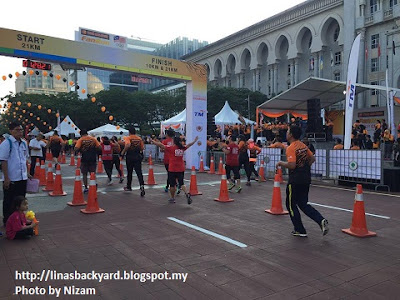 The rest of the gang finished shortly after and most of us got our sub2:30 target. A number of 2:23 actually. ^^ Thank you Bismi!

And congrats everybody! Even the sipi-sipis. Hehehe 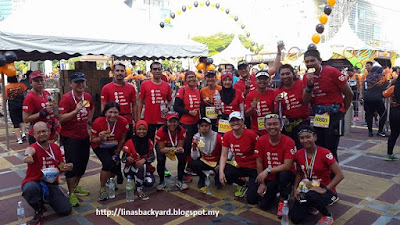 Group photo after the run.

Thank you gang for a great morning out and for the company.

Aiza for the peer pressure.
Bismi, MJ, Azmi for the pace.
Moq for allowing me to draft him for an uphill section.
Pisha, Farah, Niza, Jeli for the great company.
And the rest of the gang too. 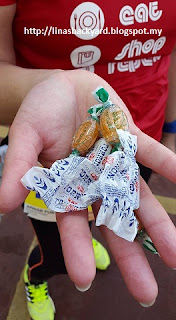 I did something different for fueling this time around. I took Torrone's barley mint and it worked great to last me through 21K! (That and the Moolabar I had for breakfast before the run, of course). 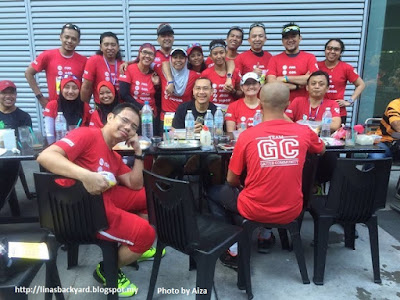 We later enjoyed some lepaking session at a nearby mamak and everyone was sure in jovial mood.

I am sure looking forward to another run with the GCs. Alas, for SCKLM most of them will be doing the full marathons.

Again, thank you GC for the motivation and see you guys in the next run!
Email Post
Labels: Close to my heart Itchy Feet Race Recap