Charging With The Bull At Bursa Bull Charge 2016

Thanks to BursaMKTPLC, I was able to join this year's edition of Bursa Bull Charge together with a few other blogger friends.

We had done a route review about two weeks earlier so I already knew how the 5K route would be. Post about that here.

I didn't have the luxury of just taking time off from work to run this as I did not run for my company so I applied for a half day leave just to run on a Thursday afternoon. At 3.20pm, to be exact. 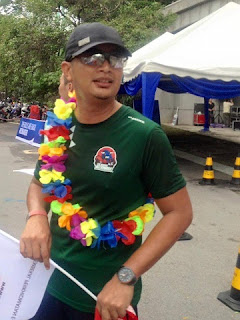 I took the Kelana Jaya Line LRT to Masjid Jamek station and then walked to Bursa Malaysia with this fella, Azril.

He did the 2.5K relay category (hence the flower garland) along with his team mates. 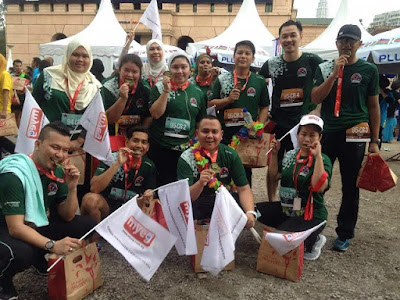 Azril and his team from myeg who is also one of the sponsors of Bursa Bull Charge 2016.

We finally arrived at 2.00pm and Missyblurkit texted me to inform that she got my race pack with her. I changed into my running gear and we went out to check the race area.

The drizzle that had started earlier had by now stopped and it was a pleasure to have a cool afternoon instead of a scorching hot one, like what runners experienced at Bursa Bull Charge 2015!

There were 3 categories for the Bursa Bull Charge:
I knew beforehand that my category would be flagged-off after all runners in the CEO category finished their run so I waited right before the Finish Line arch and waited for a friend who was running in that category. 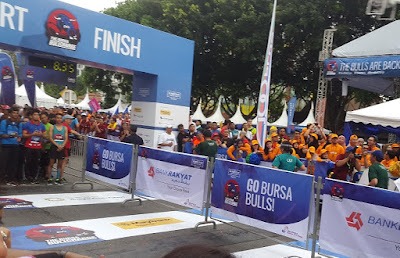 It wasn't long before she finished and I started making a move towards the Start Line right after she crossed the Finish Line. 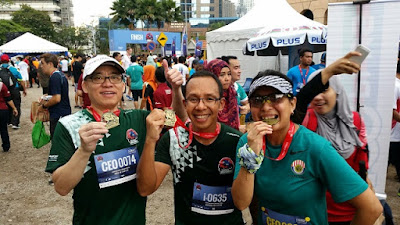 Lily and her team members! Congrats on an awesome timing!

As I entered the pen quite late, I was almost right at the back of the 5K runners but I didn't really mind. There was this very nice looking fella from Maybank in front of me so I decided to stay put and "ehem" enjoy the view. Missyblurkit had managed to wiggle her way to the front and she ran strong to finish despite having just completed a 100miles race a few days earlier.

Most corporate teams proudly wore their Corporate shirts so it's easy to pinpoint what company/organisation they are running for i.e. The Biggest Condom Maker had teams coming down too. Contoh lah (that's what was printed at the back of their white/red tee).


Flag-off saja, not only I totally didn't take any photos, I went fast at the first 3K! Bwahaha

It's not hard to see why.

Although I was right at the back and took almost one whole minute to clear the Start Line and with a huge crowd already running in front of me, the adrenaline rush was there and I just ran with the flow. I actually felt I was slow, as a matter of fact.

The organiser had placed distance marker at every 100 meters(!), put plenty of marshals, coned off the road properly, 1K arch at KM1, KM2, KM3 and KM4, and water station at every KM too!

Along the route, staff working in the area/along the race route came down to give support to runners and it was such an overwhelming thing to see in Malaysia; where one does not see roads lined up with supporters at road races all that often.

I slowed down after KM3 because of a few incidents:
It was at KM4 arch that I heard a friend's voice who was crewing for the run; encouraging runners to run so I started running again and gave her a hi-5. Saw another friend 50mtr later as we climbed up the St John Institution hill. I started to walk again later but ran as I saw two photographers up ahead. Hahaha

Anyways, it was walk, run, walk from KM4 to KM4.7 then it was time to surge for the finish line.

It was probably wiser to just run easy for the last 200mtr where there was an incline before the straight path to finish but I dunno, I saw a few fellas in front of me and decided I must "potong" them. 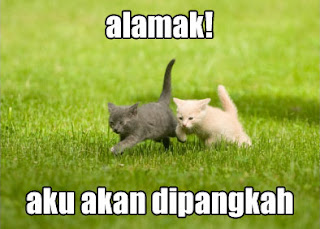 This came to mind. HAHAHA 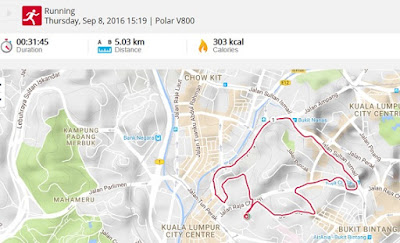 Not only the race was superb in terms of safety and traffic control, the pre-run/post-run event was great too! Thank you organiser, crew and volunteers! You guys were AWESOME. Love the emcee too. So entertaining.

Sponsors were generous and we had fun "collecting" our freebies. 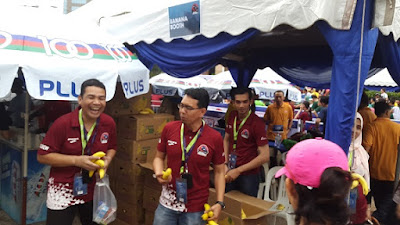 At the Banana Boat - we got to enjoy banana pre and post run. Thank goodness for that as I haven't eaten since morning.
Got myself a pack of milk too. 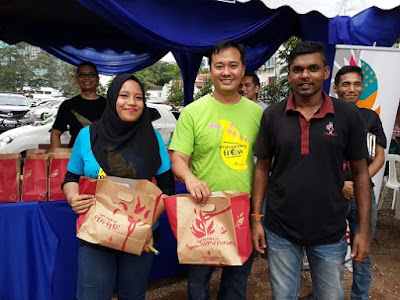 There were snacks given out and I also enjoyed ice cream potong before my run. Nyums.

It's like going to a kenduri, of sorts. You met friends and makan too. And run a bit... 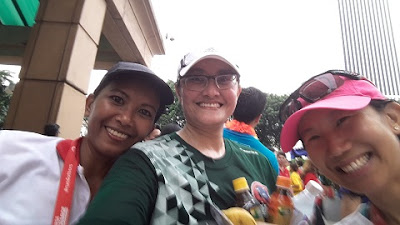 A special shout-out to Zet of Marathonbaker for taking care of us bloggers that day. 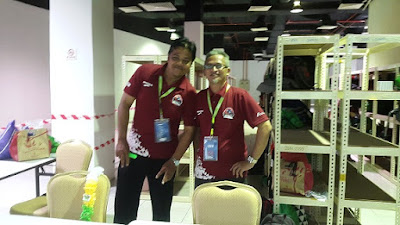 and also for the very patient crew at the luggage deposit area. Quite a number of us drop our luggage then kept adding more stuff (that we got from the sponsors' booth before our run) and they accommodated us well. Not a single impatient sigh. Great job guys!

It was a great run and a highly recommended one.

Please ask your company to sponsor staff and join next year! Ask bosses to run also! ﻿