Conquer The City With Score Run

This week is the start of my 12-weeks marathon training plan for Twincity Marathon in January.

Just 12-weeks?
Enough la, considering I had just completed a 16-weeks plan for Chiba Aqualine Run last week (although unfortunately I couldn't really train during the final months for the run).

But anyhoo, I was supposed to run an easy 1:30 run today but I figured registering for a 15K wouldn't hurt. ^^ 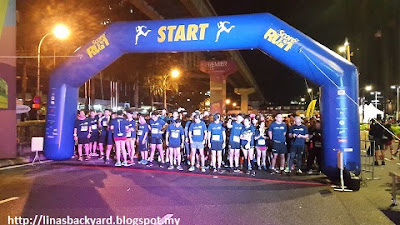 15K runners were flagged-off at 6.00am and 6K at 6.30am. Hubby was grumbling royally at the fact that a "mere" 15K run needed to start so early. HAHAHA

I was impressed with the numbers of 15K runners who joined the run. I only entered the pen about 4 minutes before flag-off and slowly tried to inch my way to the front. Even that, I only crossed the start line 1 minute after flag off, with a whole lot more runners behind me.

Similar to Chiba Run, I chose to run just by following the crowd. I tried not to look at my watch during the run and ran at perceived effort. But even with a slow run, that was littered with walk breaks; I felt tired. I guess with two runs last week (Sat & Sun), along with an 8-hour hike on Monday, 4-hour bike on Tuesday, a few hours walk on Wednesday and a 5K on Saturday night, all that took a toll on me during this run.

Thankfully, the route was a nice and not really challenging. A good route to aim for a PB. Although at a few stretches during the early part of the run, we had to run in darkness.

We really ran and conquered (a bit lah) the city on Sunday, 30.10.2016 morning. The 15K route took us past some iconic landmarks around Kuala Lumpur and also the familiar running/training route in Bukit Tunku.

Water stations were located at about 3K intervals and we were served with water and Revive isotonic drinks. Distance markers however were only seen at halfway mark; at 7.5K and later at 1km gap.

There were many flat stretches which I actually hate. Hahaha

At KM13, with just 2K more to go, I chose to walk because it was flat. Mental woi run on long stretches of flat road. *excuse only lah* 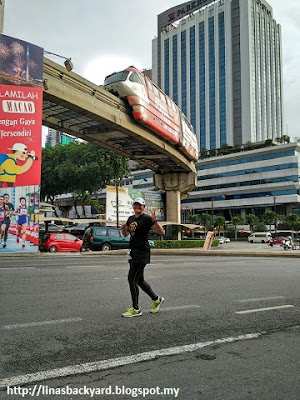 I only started running again when it was about 700m towards the finish line and saw Hubby waiting to snap my photo, sitting by the roadside.

We actually waited for the monorail to pass to snap this photo. 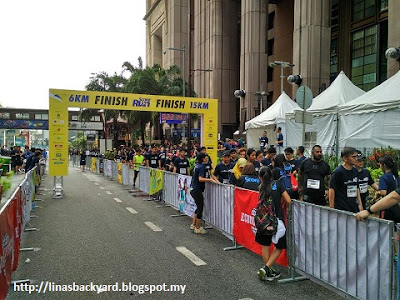 The finish line was orderly in my opinion. We got our medal and a bottle of mineral water before proceeding to enjoy Milo, cereals and collected a free Zespri Kiwi fruit. 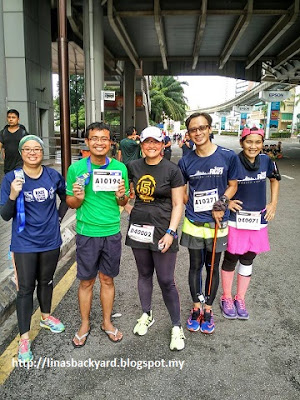 Heard a friend's voice somewhere and we walked over to say hi. Adilah, lejen Mizan, Izuan and Hezzy.

A few photos later, with this group of "tegar" runners - retired or otherwise and a few more and we walked back to our car. 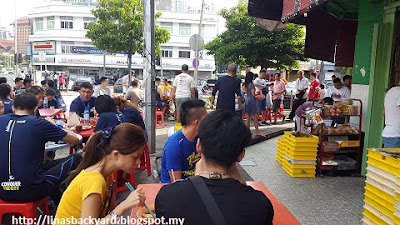 Saw runners already enjoying breakfast and Hubby wanted to buy nasi lemak but alas, not much lauk left... So had to drive home and buy nasi lemak at home lah.

All in all, it was a nice run. The route is different from what I used to do for a KL run so that was nice. A bit too humid this time for my liking.

For fueling, I brought along a bottle of N8 Endurance Drink mixed with water and took sips of it during the run. I was feeling gassy before the run and despite eating a light breakfast; felt that a gastric episode was looming. Taking the drink helped to make the "angin" lessen.

Another thing that I like about Score Run 2016 is their simple but nicely designed event tee. There was a big brouhaha when the organiser changed the event tee colour but I think this dark blue is quite nice too.

And we had the option to print our name on the back of the tee. I didn't submit the name when I registered actually, but the Score Run peope had nicely emailed me to get the name I wanted to be printed on.

The front of the tee.

I hate tacky event or finisher tee. No need to fill up the tee with all sorts of ads or design lah.
Email Post
Labels: Events Itchy Feet Race Recap Review