It felt like it's been ages since I last volunteered or helped out in a race.

Well, the last one was being a crew for Ironman Malaysia last year. And before that, a few races here and there but mostly small scale races that friends organised. So when I was asked whether I want to help out at Illumi Fest Run REPC, I excitedly said yes.

As of last weekend, Illumi Fest Run had more than 5,000 registered participants (and growing) so this was a crowd  I'm not used to deal with. Yet.
Hubby and I were the noobs, and fortunately, the rest of the volunteers were old hands in this. Despite only 6 volunteers manning the REPC counters on Saturday - doing everything from checking participants' details, getting the correct t-shirt size for every participants and putting everything in the swag bag, they took it in their stride and did it so cheerfully and in a friendly manner.

Without much supervision, they knew what to do, how to handle duties and the crowd too. Hats off to them!

I was pretty unsure whether I did things right myself but fortunately, those who came for their swag bags collection were pretty patient and friendly lot too. I hope I didn't f**ked too much last weekend. ^^!

For the runners, they sure were one eager lot. The swag bag counters only officially opened at 10.30 am but there was already a queue forming at 10.20 am! We decided to open the counter a few minutes earlier and then close a bit later than the 9 pm closing time as some runners still came sauntering by at 9.15 pm on Sunday.

With a huge turnout of runners collecting their swag bags on the first day, everyone kinda worked non-stop from 10.30am to 9.00pm with just a really short break for lunch (or rather it can be called early dinner at 4 pm). After cleaning up and packing, we only left the REPC venue after 10 pm.

A bulk of runners came on Saturday, on the first day of the REPC and a huge numbers of them did bulk collection. It was like, one person would be seen carrying 10-20 swag bags collected on behalf of friends and family. 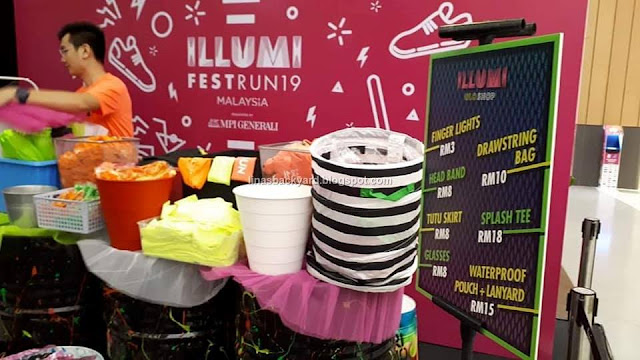 The volunteers seemed to take everything in their stride and did things quite calmly and cheerfully. There were a few hiccups here and there (especially by me hahaha) but manageable. We did have a lot of requests to change t-shirt sizes during the REPC and some were quite persistent about it but we stood firm in disallowing any changes.

The two volunteers manning the Glo-Shop which sells Illumi Fest Run merchandises were no less busy too. The Glo-Shop was a hit among runners and who can blame them! Just look at the price of the merchandises! The finger lights were sold out early on Sunday.

I couldn't chat much with the other volunteers on the first day because we were so busy and the queue for the swag bag never seemed to let up on Saturday. 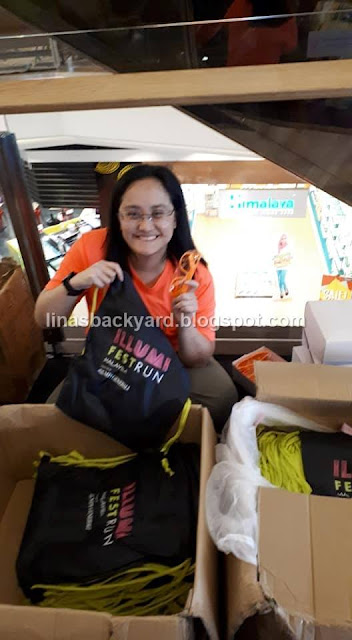 It was quieter on Sunday and whenever there was a lull at the REPC counter, one of us would either go take out and arrange t-shirts or the swag bags.

We also chatted more on Sunday.

These volunteers had volunteered at many other races, including Milo Run! They shared with me their stories about their previous experiences and it's so interesting to listen to their stories.

Anyways, Illumi Fest Run 2019 will be held this Saturday night on Mar 2, 2019 at Selangot Turf Club.

For those joining the run, I hope you enjoy the run!

For me, being able to do this makes me appreciate race volunteers even more.
Email Post
Labels: Close to my heart Events Hobbies n Stuff Itchy Feet Out and About