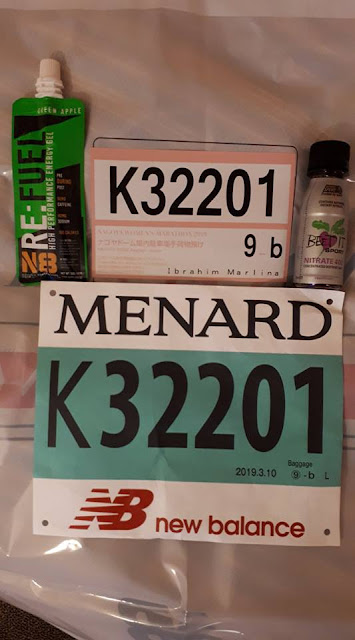 When looking for races to join in Japan, big races don't appeal to me and I rather join marathons  that have very limited number of foreign participants slots available.

I have to admit, Tokyo, Osaka or Kyoto Marathon have never really appealed to me but of course, curiosity kinda killed the cat which was why I joined the ballot.

But I thought, I'd only go to if I got both Tokyo and Nagoya Women's Marathon slots and do a back-to-back races. Alas, I didn't get a slot for Tokyo Marathon but I did get into Nagoya Women's Marathon. In a hindsight, it really was for the best because training was really non-existent for me in the months leading to the marathon so doing a back-to-back would really be fooldhardy. (As if running a marathon without training is not also lah...)

I was still hesitant about joining until the very last day due for us to pay our registration fee and it was the day we were flying off to Hokkaido last year.

Suffice to say, I paid and registered and on Sunday, Mar 10 2019; I ran in the Nagoya Women's Marathon. And I finished!

But it was my first big race in Japan that had more than 15,000 participants in a single category so I wasn't sure what to expect.

REPC
We arrived Nagoya on Saturday after spending a night in Toba, Mie prefecture. A Japanese runner; through a few friends of mine had wanted to meet up with me and we arrange to meet during the race kit collection. I also managed to meet other friends at the REPC.

REPC was very smooth and in a very clockwork precision. Then we headed to Nagoya Dome to check the expo which was very,very packed. 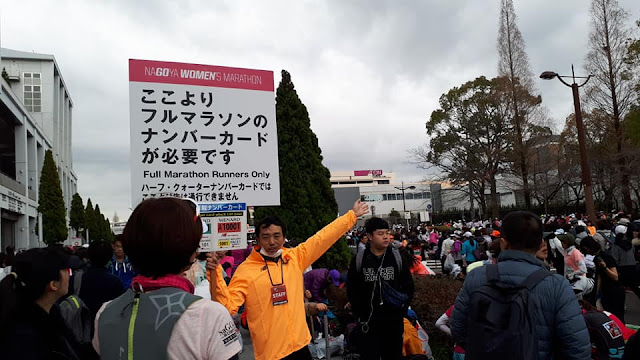 RACE DAY
We knew beforehand that it would be a wet marathon day as we watched the weather forecast daily before Sunday.

I had brought along my trusted Under Armour windbreaker which  I always have with me for all my Japan's races. The Japanese runner that we met during REPC had kindly given us not only Japanese sweets as presents when we met, but also raincoat and shoe cover for Sunday's rain. How very thoughtful of her.

I was placed in Pen K, which was way at the back. There were Pens A - N and runners were placed in their respective pens according to their previous finishing time. I was so relieved that I wasn't in the last pen and I had hoped to clear the start line in less than 30 minutes.

Flag-off was at 9.10 am after the wheelchair category was flagged off. With so many female marathoners joining, it took me about 18 minutes to cross the start line and start my run proper.

Despite the crowd, I had no problem running and as usual, I just kept to the leftmost side of the road. It was a good choice because then I'd easily spot and posed for photogs.

Supporters lined up the street cheering for us and I hi-5 almost everyone who extended their hands. Admittedly, I was a bit worried whether I was wasting energy that should have been conserved for the run instead of enjoying myself too much right from the start but it was hard not to be affected and moved by the support we had gotten that day. 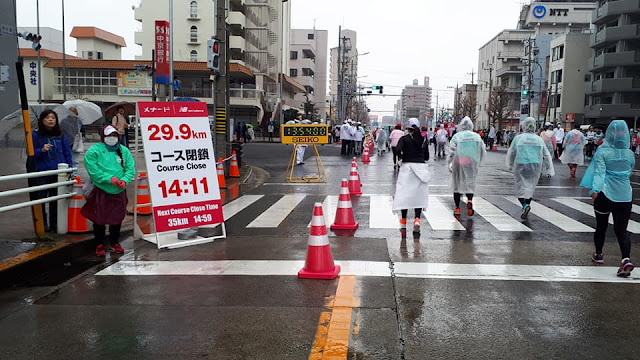 Timing mats were placed at every 5K interval and there were 9 checkpoints (CP) that we need to pass before it closed at fixed time and any runner running slower, will be considered "Did Not Finish or DNF".

Nagoya Women's Marathon has a very generous cut-off time of 7-hours but one also need to factor in the time needed to clear the start line behind a massive crowd. The 7-hours is according to Gun Time so if you cleared the start line 30 minutes after flag-off, it meant you only have 6:30 hours to finish the run. (Of course, this kind of worrying is only applicable to slow poke runners like me lah...)

Along the route, not only they had distance markers visible for us, they also have markers for toilets and distance for the next toilet locations, aid stations markers, photographers stations, etc.

Plus the whole city seemed to close down for the marathon festival that Sunday. 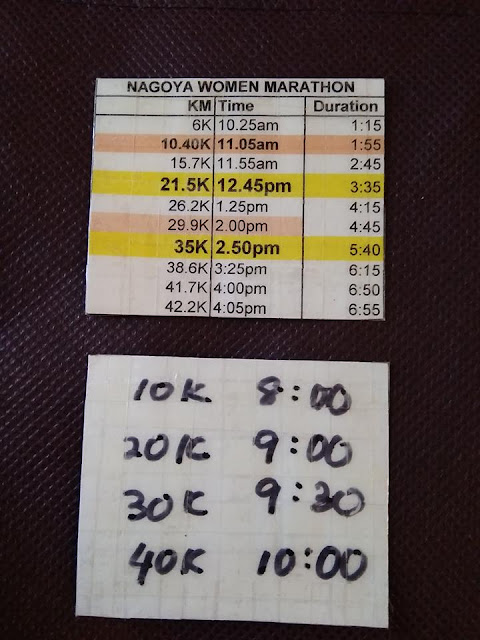 I had a simple plan for the run, keep below 8min pace for the first 10K, then below 9min pace for the second 10K, 9:30min pace for the third 10K and final 12K at 10min pace. It was a very realistic plan for me to make sure I finish before cut-off with the lack of training prior to the marathon.

I wasn't expecting to see Hubby during the run because we had agreed that he should enjoy the day  in town and we'd meet again when I return to the hotel in the evening.

So I wasn't expecting to hear my name being called when I approached KM10 mark and it turned out to be him! 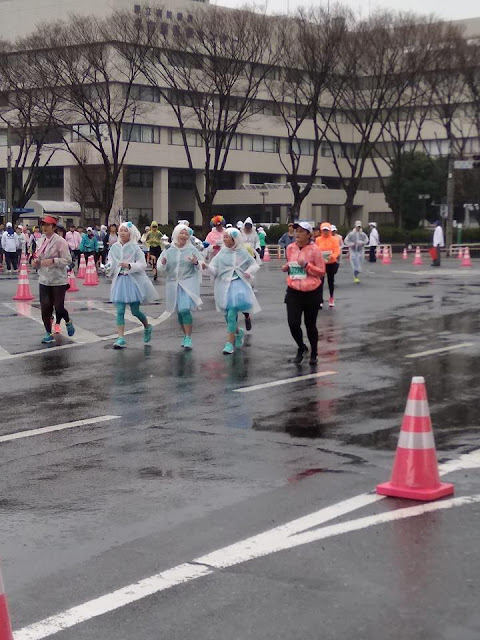 He tracked me and was waiting for me again at KM24 and KM34, braving the rain so that he could support me and snap my photos too.

At KM20, I heard my name being called again and it turned out to be a friend of mine who was there waiting for his daughter who was also running in the marathon. We chatted a bit (I'm not that much in a hurry that I couldn't stop for a few seconds to greet a fellow Malaysian) and he took my photo which I of course, happily posed for before setting off to run again. (Kelvin, where's my photo? LOL)

I was pretty happy I cleared the half-marathon mark in less than 3-hours. And with ample time before the next CP closing time.

I remembered reading that there would be a food station available at KM22.5 mark so when I got there and no banana was in sight let alone any candies or chocolates, I was pretty down.

I had been stopping at all water stations and making sure I drink so that I won't be dehydrated or start cramping but I was expecting I'd be able to eat something when I reached the 20+km mark.

Hubby later said, it's probably because food had run out for us slower runners and for me, that was kinda ridiculous considering that I had never encountered food station that ran out of  food in Japan before. Ever.

But then again, this was my first BIG Japan race so I guess that could happen especially when I was running very slow that day.

Good thing I did bring a pack of N8 Endurance energy gel with me, so I took that instead but feeling rather grumpy for not having real food to eat.

I finally got to eat some bananas (the volunteers had even peeled them for us!) at later food stations, maybe at KM27.50. Then at KM32, we were served bread, bananas, chocolates and candies apart from water and sports drink. There was even a Red Bull drinks stations available but I'm not a fan of Red Bull so I skipped it.

I also enjoyed the awesome hospitality of local people who braved the rain to support us and ate strawberries, candies and drank coke offered by them. They even reminded us to keep warm and keep running. Such great support.

All along the route, there were no end of cheers from supporters and they still offered a hi-5 until we were running towards Nagoya Dome and to the finish line. I love that. 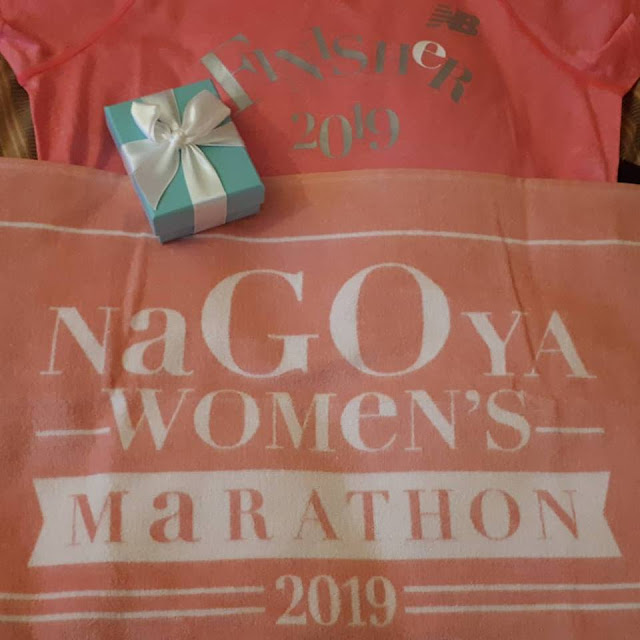 Finally, I crossed the finish line, collected my hard-earned Tiffany pendant, finisher towel and tee along with a number of other items given by the sponsors.

Unbeknownst to me,  Hubby was updating his Facebook every time we bumped into each other and let others know about my progress.

I asked him later "what if I didn't finish?" and he just shrugged. I guess he has better faith in me than I do.

Nagoya Women's Marathon may not be the best Japan race that I've experienced but it is certainly a memorable one. Running a marathon with tens of thousands other female runners felt very empowering.  And very emotional.

The flat course has many looping that some did not like, but it ensured that we would always have someone to cheer at the other side of the road. And I like that. It also allowed supporters to avoid rushing far to cheer for their runners.

For those aiming for a PB, or doing their very first marathon, Nagoya Women's Marathon is a great marathon option.

For those who lack training, the flat course is also a great option because... no hills mah. Hahaha

Nagoya folks - thank you for your hospitality. It's been an enjoyable experience.

Some videos taken along the course can be viewed at my Youtube channel : Cik Arnab & En Kura-Kura.
Email Post
Labels: Celebration and Holidays Close to my heart Events Itchy Feet Out and About Race Recap