The run's original venue was supposed to be at KL Sports City in Bukit Jalil but due to a clashing event, it was changed to Berjaya Times Square.

For me, I do like the change of venue and the 21km race route that got us really running through the city. 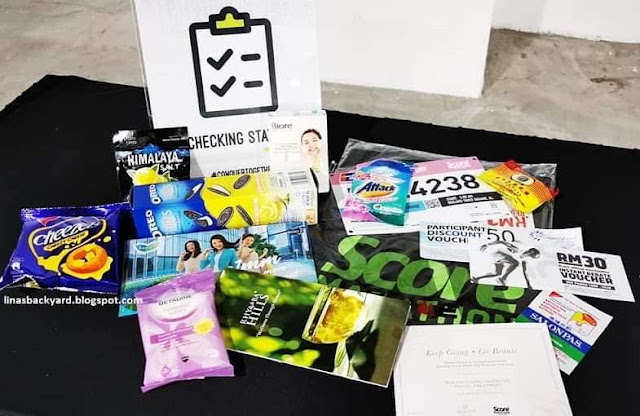 REPC was done a week earlier at Starling Mall. I also like the spacious and airy area of the REPC.

Interesting mix of goodies in our goodies bag and the Kao Attack detergent is actually useful. (I received detergent in my Nagoya Women's Marathon goodies bag too and used it after my marathon to wash my soaking wet and stinky running gears).

Having a "Checking Station" table is a good because runners could check their entitlements easily there.

Race day itself is not without drama.

I had been experiencing crippling shoulder pain and had gone to take a painkiller jab at the clinic on Friday. My last run was on Monday when I did some short hill repeats and I didn't run at all after that. I was hesitant to run in SCORE Run The Day Edition but the lure of the run's nice looking finisher tee is too great to resist!

I arrived Berjaya Times Square a few minutes before flag-off and at 5.00am (5.02 am my watch), it went off with a bang!

There was a huge crowd of 21K runners, in both Speed and Cruise categories. I opted for the Cruise Category as it's been ages since I last ran a sub2:30 half marathon (timing for the speed category).

I started slow at the back, just behind two well-known figures in running and also SCKLM 5:30 pacer, Kelvin and KK.

It was a nice pace and didn't feel hard and I just followed them, occasionally chatting with them.

We caught up with two of the 4-hour pacers as we were reaching  KM2 mark.

At the time, we were running in 7 min+/km pace.

As we approached the first u-turn point, we saw the 2:30 pacer ballons (orange) on the other side of the road with the 3:00 hour pacers (red balloons) closely following behind them with a 50m gap or so.

The first water station (WS) was located at KM3 and at each WS, there were also mobile toilet located nearby. However, the arrangement of the mobile toilet at the first WS made it as such, runners who were queuing blocked much of the road for other runners to pass through easily.

I skipped the first water station as I wasn't feeling thirsty. I had drank Beet It Sports before arriving to the race venue earlier, and it really helped in managing and controlling my need for fueling.

We reached Dayabumi at around KM7 and the Subuh's azan was heard soon after. A number of runners darted to cross the road to head to Masjid Negara to pray but the route did actually brought us right in front of Masjid Negara soon after, after KM9 or so at around 6.10 am.

The route was nice and interesting and every section where we ran was well-lit.

The second WS was located at KM9, near to Masjid Negara and then we went up the steep section nearby TV Al-Hijrah building and I resorted to a walk here.

I was running at an average pace of 7:45 when we reached Masjid Negara which is too fast for me because I was supposed to do my "training run" today at Gear 2 pace.

You see, I had taken up The Running Plan training and had followed it for the past week. I was supposed to do a 14K Gear 2 pace run today but since I had registered for SCORE Run months earlier, I just tried to follow it, albeit with extra mileage.

My pace dropped after Masjid Negara, and of course what with the run-walk I employed to tackle the inclines around Lake Garden and Bukit Tunku.

The next WS was at KM12 and there were cold sponges provided here.

I wasn't really feeling thirsty or hungry or tired yet (Beet It Sports really helped!) but I still stop to drink a cup of water. I'm not in a hurry and I decided not to push myself too much during the run.

I reached KM15 mark in 2:03 which is still within my Gear 2 pace and I had hoped to somehow see the 3:00 hour pacers but alas, I guess I was too far behind and too slow to find them.

The KM15 WS (although my Polar had read 16K by this time) provided us with bananas.

I decided to stop, take some photos and eat my banana slowly.

Despite being quite slow, all WS were well-equipped and still had plenty of refreshments for runners. Good job.

We then entered Jalan Sultan Ismail and headed back to the city area.

I  tripped and almost fell down near Medan Tuanku at KM17 but luckily, I managed to avoid "kissing" the tarmac. But my butt kinda cramped and my legs experienced some pain after that.

All through the run, I was being careful not to pump my arms (especially my left arm) too much to avoid aggravating my left shoulder pain. Whenever it got painful or when I started to feel numbness in my fingers, I stopped for a walk and let my arms down in the hope that it get blood circulating again.

A friend later tapped my shoulder at around KM18 and we ran together for a couple of KMs and I picked up my pace back to 7min+/km with her.

But I asked her to go ahead afterwards because I started feeling nauseated with the shoulder pain.

My Polar watch had shown 22K when I finally reached the last 200m towards the finish line.

Its either the 21K route was actually over-distance or my GPS went cuckoo while I ran around the city (happens when you are running around skyscrapers). 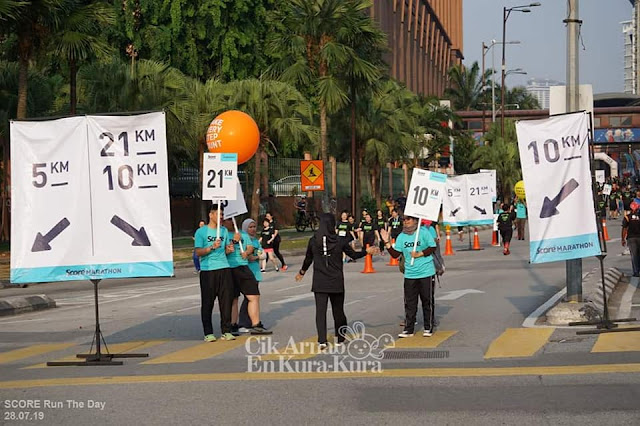 The final section towards the Finish Line had a last incline to "torture" runners for the last time but the organizer had placed cheering crew there to motivate us.

I hope these fellas won't lose their voice tomorrow! 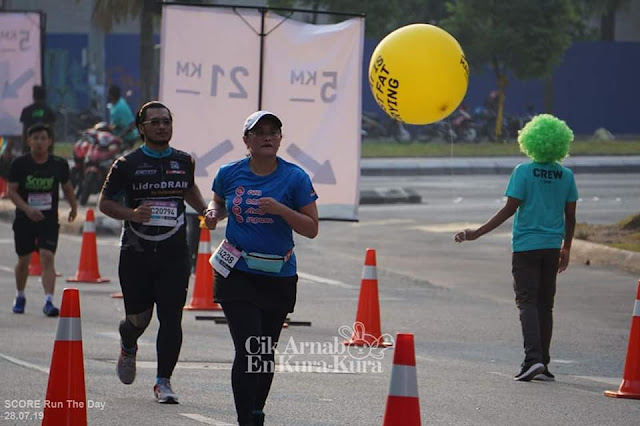 The Finish Line was well controlled this time.

First we passed through the medal collection area and volunteers put on our finisher medal (which is a nice touch, instead of giving them out still wrapped in plastic).

Then we walked farther ahead for our bananas and mineral water.

From here, we exited and went to collect our finisher tee. For me, collecting my finisher tee was painless and fast. 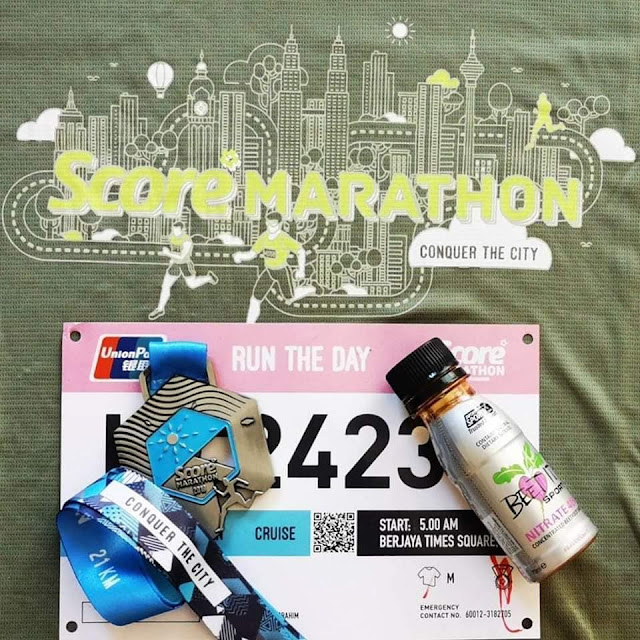 The reason I still run SCORE Run The Day Edition despite my pain, not enough training and a huge dose of laziness - the nice looking finisher tee.

Yup, I do like their finisher tee and it'll be so sayang not to get one.

Took some photos with friends before I joined Hubby who was taking photo by the roadside and took over camera duties.

All in all, it was an enjoyable run for me. SCORE Run The Day Edition is indeed the best SCORE Run that I've joined so far. They certainly made improvements from previous editions.

Some photos taken by us between 8 am - 8.40 am can be viewed at Cik Arnab & En Kura-Kura Facebook page.