Just a few days after returning home from our two-weeks vacation, we joined a race in Putrajaya. The entry fees weren't in cash term but we sent in recyclable items as our entry fees so it's almost a free race.

Raimie wanted to enter a running race and be like Mommy and this particular race had children category with a not-too-intimidating route. The Desa Park City Run would've been great as his first entry to a race but hey, can't bang my head if we were too late to enter it. Just get on with our lives and find other races to join. 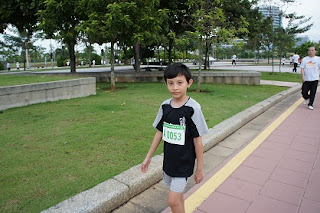 So this is a special event for us. Raimie's first running race outside of school. Yeay Raimie! I registered the whole family because well, it's a free race. Zaini however decided to accompany Raimie doing his run and so didn't run the 7K. Everyone has matching t-shirts that we can wear now though. hehehe

It was a rather havoc run for me. Runners were still registering and collecting t-shirts & bib numbers when the race was flagged off. I had just came out from the loo that time so I started way back at the end. And not being totally ready, I ran with a parched throat. Thirsty! With all the "huru-hara" (definitely not good to collect bib numbers on race day for me); I forgot to drink before starting my race.

Thank goodness there was a water station at KM2.5 but that was the only water station! I should've brought along my own bottle. My itchy and swollen throat condition wasn't helping either. 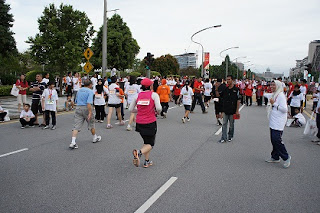 I was wearing the same get-up I wore while running in Japan. Bright idea. NOT! Got completely overheated halfway through the race. To make matter worse, my tummy was rumbling. I was running on an almost empty stomach. Seeing a lot of runners nonchalantly cutting short their route (those who are in E & F category : Men & Women 19-40 years old. You guys were wearing the www.sisa.gov.my shirts too, for goodness sake!) choosing to make their route a 3K instead of the full 7K was so dampening for me. Any thoughts of getting the limited medal was quickly brushed aside so I just ran and walked my way to the finish line. It turned to be a "couldn't be arsed" run for me, yesterday. 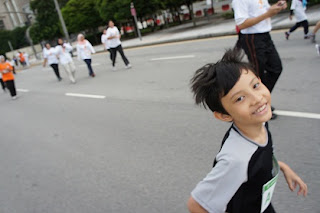 Raimie however did good. He ran and walked the whole 3K and made it through the finish line. Good for him! I am so proud of my boy.

Despite the havoc and "huru-hara" of the race, I have to commend the people manning the registration, collection & t-shirt distribution counter. They were efficient and did things fast so we didn't have to queue long. And they were quite nice people too. :)

They even distributed goodie bags after the race. Plenty of mineral water handed out freely too. No Milo van though. huhuhu

Pretty festive atmosphere at the run, with lots of events slotted. Saw plenty of buses with "rombongan" coming in too, and they came complete with picnic baskets. What a nice way to spend the Sunday morning.

But I hope race organisers, if they are doing this again next year (I sincerely hope they do!), to ensure proper starting of the race. 7K runners were supposed to start first followed by the 3K participants but from the starting line, I saw few runners in the boys category running too. That gave them like a 15 minutes advantage from the boys/girls runners that waited properly for their category to be flagged off.

Also, I do sincerely hope that we runners not "cheat" our way through the run. The joy of running is to run the distance and make it to the finish line. Not by doing your own shorter route. What is the value of your medal when you know that you didn't do it properly?

But then again, I suppose most of the participants running were doing it for fun, so why am I being so righteous about it, eh? xD 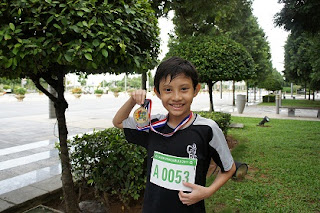 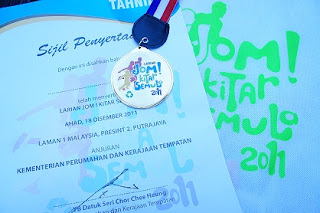 Anyway, happy to say that the limited medal of the Larian Jom! Kitar Semula is added to my collection. ^^
Email Post
Labels: Close to my heart Itchy Feet Race Recap