Last week’s Pacesetter’s Back to Basic 30K run doesn’t count because that was basically an organized and paid LSD. ^^

Yup, I’ve done 12 races for the year. Less three than what I had planned to do. Forgo Borneo International Marathon as it got postponed and I can’t afford the high airfares for the new race date. Did not start (DNS) New Balance Half Marathon due to injury. Hubby ran River Jungle Marathon on my behalf due to lack of training because of the injury.

12 races, one together with my family at Pisang Relay Run in early May. Today, another family run. Not a relay run but together. We started and finished together at McDonald’s Olympic Day Fun Run.

Was it fun? You bet! I unhesitantly forgo Live Great Run, which clashed with this just so I can run with the guys. My guys.

And what a way to do my 12th run. Fun and with the family! 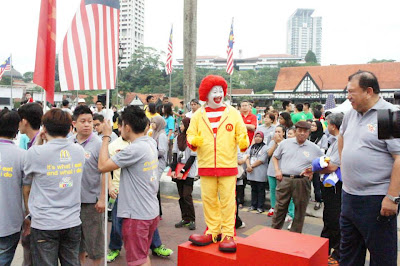 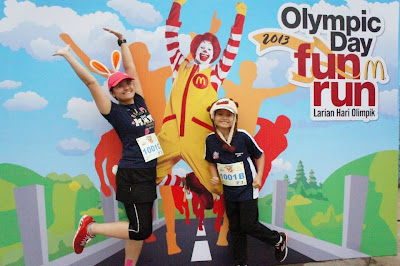 Warm up & stretching session before the run. In style. HAHAHA 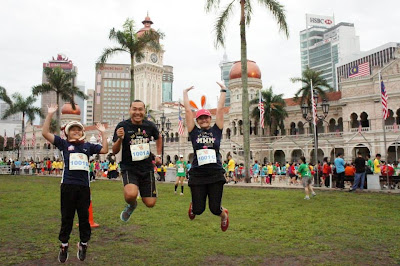 Jump jump a bit for more warm up. Photo taken by Kahwai. :-) 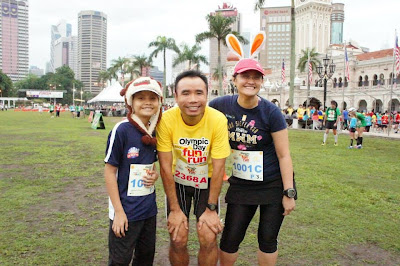 We arrived around 7.15am and with the first category (10K) being flagged off at 7.30am and ours at 8.00am, we had plenty of time to photo ops and general mooching about. 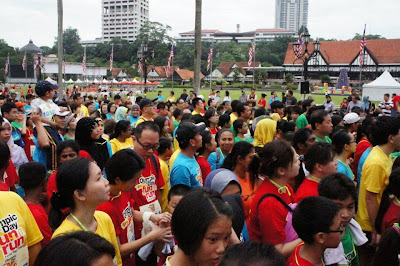 The M, N, P categories being flagged off together. Masuk kandang cepat!

Since this event had a lot of school children participating, the official announcement sounded really similar to the ones you'd hear at school assembly. Quite hilarious. Equally hilarious was that most kids were still blur even after instructions being yelled out through the mike. Kids...

Kids being kids, a lot of them were pretty excited and shoved their way to the front. As they started, most sprinted right away, zig-zagging between runners with nary a care then "pancited" barely 1K ahead. ekeke

Raimie just followed our even pace. We erroneously thought there would be a water station for the 3K kids and Raimie who was hoping to stop for one midway through the run was pretty upset at us. LOL 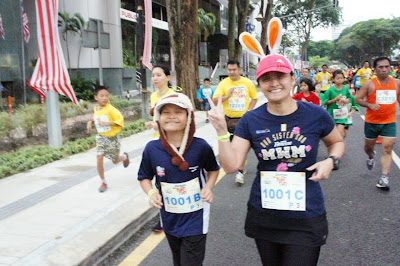 Still can look happy, barely 800m into the run. 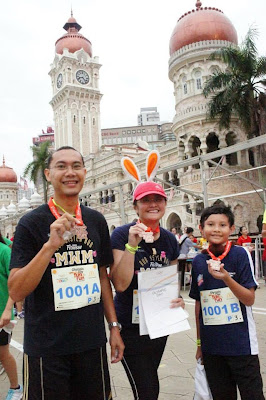 18min 50sec later. Finished the 3K run, bagged one of the limited medals that were given away to the first 50 families that arrived. We managed to get 12th placing.

Daddy mentioned that if Raimie didn't stop and walk, we'd probably could get 10th or 11th. Heee... What to do. Mommy kesian at the son so Mommy let him walk. *pamper son so much*

We finished early I guess and the refreshment stations were still quite empty so we had a field day drinking Ribena, Milo, Minute Maid' orange juice, Coke and mineral water some more with no queue at all. Kembung air! No food though. Hmph. Me hungry also lor.

Rest a bit then look for people to harass for  photos. Hihihi 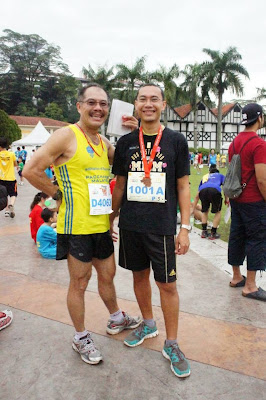 Took some more photos, lepak a bit then decided to head off because we had a few more errands to do in the morning.

Son was happy. Parents were too!

A very productive morning, if I say so myself. :-)
Email Post
Labels: Close to my heart Itchy Feet Out and About Race Recap