Through The Jungle And River

Well, technically not; because on Sunday Sep 1st, marathoners who did the River Jungle Marathon ran on asphalt but they passed by a very scenic route and enjoyed nature. 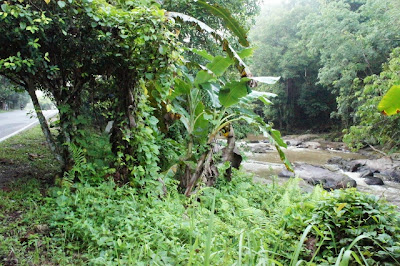 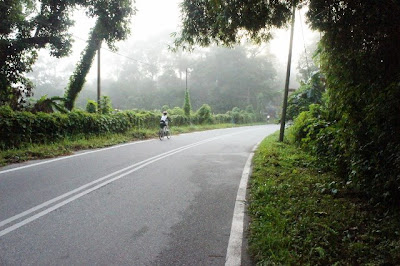 
I was supposed to run this marathon but as injury made me take a running rest, and with Doctor's order to rest 3 weeks when I saw an orthopaedic on Aug 14th, Zaini volunteered to run on my behalf. I was skeptical at first but finally agreed on a condition that he needed to do at least a 3hour run and gauge his ability. But he insisted and did whatever nonsense advise I dished out to prepare for it. For example, he asked me my training plan and I told him that at this late stage, all he can do is to prepare for endurance so he just ran for the mileage. He did a LOT of hill work too.

With less than three weeks to train for a full marathon, it is kinda suicidal to do it. But though he doesn't train for any races (unlike a certain person), Zaini runs regularly. Usually around 3-5km on a weekday and he can walk for hours and hours. You should follow him during our vacation and you'll see that he has no trouble walking from 8am-8pm and after Raimie & I went back to the hotel room, he usually went out again to sightsee alone.

Yeah, running a full marathon without proper training (this fella's longest LSD was 20K) is not advisable.

Pre-Race day.
We spent the morning part walking around Taman Saujana Hijau and meeting up with fellow runners. Thanks again Arman & Suzie for the awesome Nasi Lemak and Teh Tarik!
Evening was spent traveling to Klang for my nephew and niece's birthday party. Then, did some shopping and only arrived home after 8pm!

Race Day.
I woke up at 2am to prepare sandwiches. Zaini woke up at 3am and we were out from home at 3.30am.

The atmosphere at the race venue was festive. Everyone was happy to see everyone. Met a whole bunch of people there. 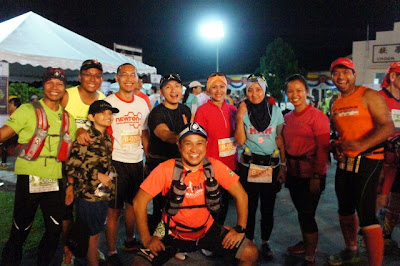 Happy faces before the race. 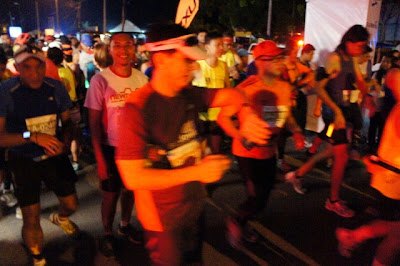 The start went with a bang, literally. With fireworks. Hope the neighbours didn't get mad at us! LOL

I already planned to station myself at one of the water stations but before starting off our walk, Raimie played around first. 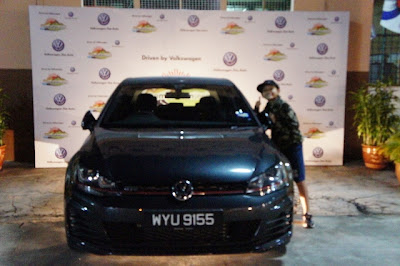 Posing with the title sponsor's car. 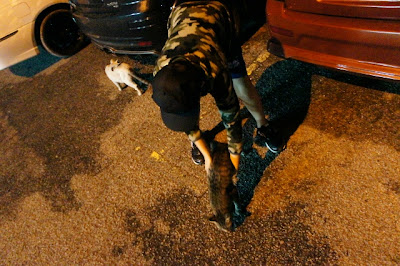 Playing and feeding random cats too. 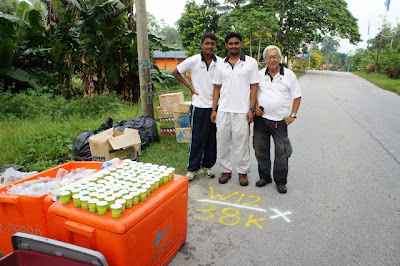 Raimie and I walked 5km to the second last water station at KM38. 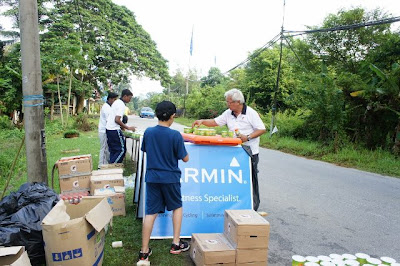 To keep boredom away, Raimie helped out at the water station while I pretend to take photos of runners. 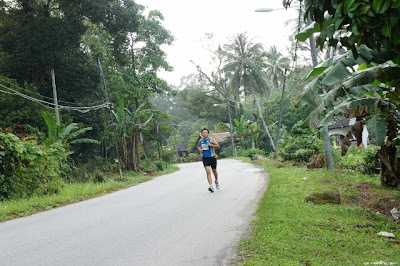 A runner arriving KM38. Love them. When they see me, they gave thumbs up, smiled and some who walked actually obliged my gestures to make them run again so I can take photos of them... running. This, despite them already tired and exhausted running 38 kilometres! *muacks* 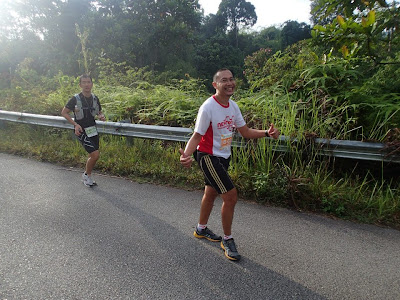 While Raimie and I were enjoying the fresh air and the company of KM38 water station volunteers waiting for the arrival of runners, Zaini was pounding the tarmac. I got feedback from runner friends on his whereabouts. Most remarked at how cheerful he was.

He ran the first 11km before getting to the dreaded hilly section.

Plenty of runners were picking up speed reaching KM8 but not without reason. There's a surau at the stretch and most Muslim runners reached it just when the Azan for Subuh prayer was heard. A stop there for them and then off they went again. Thanks Millie for the update.

His first 3K was a slow 8min pace. Then he picked up pace running a 7:30min pace for the next 3K. Took more time for the next 9K with a total time of 1hour 1min. Slowed down as he walked uphill during the looooong hilly climb and ran downhill doing 23min for the next 3K. 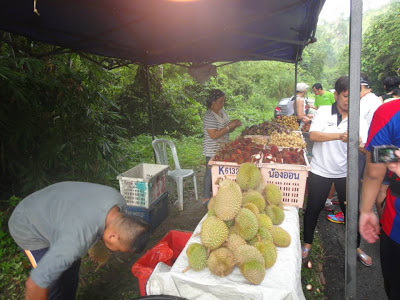 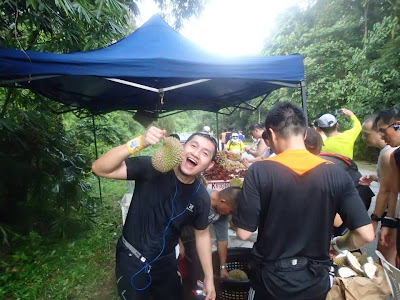 The slow uphill wasn't due only to him speed-walking. The water stations and fruits stations kinda made runners stop and grazed for food. Water stations were abundant. There were supplies of gel too, apart from water and isotonic (Revive and Gatorade). Fruits station was a hit!

Bananas were offered. There were also langsat, rambutan, mata kucing and even DURIAN offered! Yes, runners ate durians halfway through their race as those two photos above were taken around KM23.

Zaini brought along a packet of GU Chomps, two packets of GU gel for the marathon. He also took two whole Japanese cucumbers along. In the end, the only refreshment he needed was the cucumbers. He munched them during the run.

Damn cheap compared to buying gels, I tell you! LOL

Zaini got a cramp at around KM30 making it a bit painful to run so he settled with power-walking. Power walking that took him around 27-28min to finish a 3K split.

Pebbles got into his shoes at some point and it made the blisters that had developed on both his feet (the heels) popped which made the run/walk more painful. He had slathered Vaseline on his feet earlier but I guess it wasn't enough. Poor hubby. 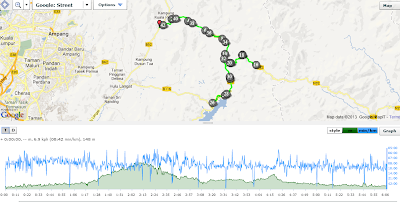 The route and elevation.

For me and Raimie, we stayed at the water station until 10am and started our walk back to the finish line. Along the route, I'd stop and still take photos of runners about to pass us. Bumped into a few familiar faces who hollered and said hi to us too. Thanks guys! And good job as those were runners doing a sub 5:30 run. 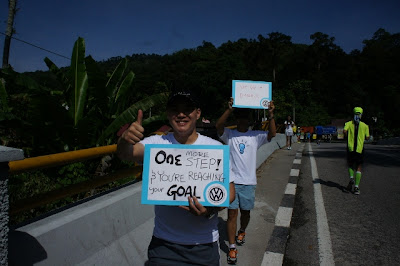 A few hundred metres to the finish line and runners can see more supporters. There were plenty while they were running a long the route too. The VW cars went up and down the route and there were supporters in the cars giving encouragement to runners. Awesome!

Registered cheer crews/supporters even got a t-shirt and a cap too, by the way. 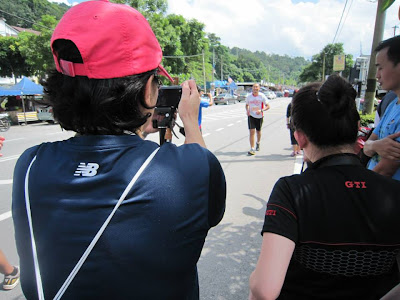 Zaini arrived at around 11am, six hours after the start. His full marathon, and he did it at 6:06! Congrats hubby! We're so proud of you! 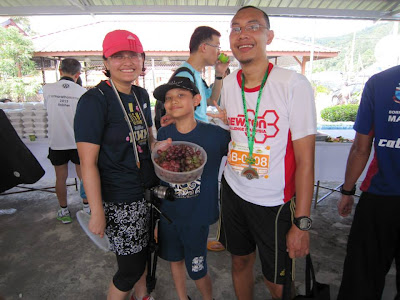 Me, Raimie and Zaini and.. some grapes I brought along. Hahaha

Thanks Rashid for the photos! Bila nak update blog? 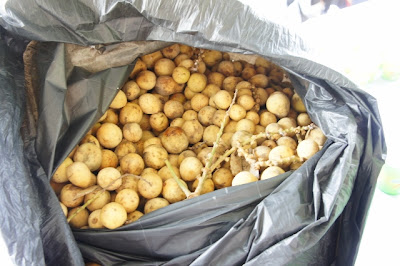 Some langsat at the refreshment station at the finish line. Runners were also given Nasi Lemak, Bihun Goreng, Gardenia bread, watermelons and more drinks. No Milo though. Not that we mind.

We hung out for a bit, waiting for friends to arrive at a nearby stall. 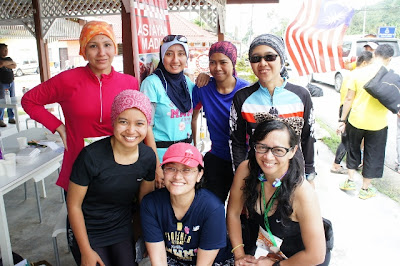 
The rest came to support fellow runners running that day. Two came after training at Bukit Gasing. The lady in the cycling jersey cycled along the route with her husband giving support and cheer to runners. Gotta love them! 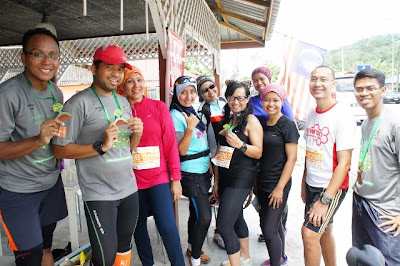 More photos, with the guys too. 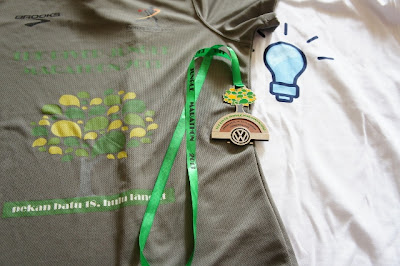 A medal, a finisher tee and a volunteer tee. There's a Golf cap somewhere but Raimie staked claim of it.

It end up that Zaini can't wear the finisher tee as the bib was registered under my name so it was a ladies' cutting shirt. Instead, he was wearing that volunteer "Think Blue" tee today. Pity him. I guess if he want a full marathon finisher tee, he just have to do another marathon! And under his own name!

More photos of RJM over at my FB page. Check it out! Sorry it wasn't much. Didn't have much memory space left and I didn't expect that I'd take a lot of photos!
Email Post
Labels: Close to my heart Itchy Feet Out and About Race Recap