The Second Time Around

I went into this just aiming to finish my run. A complete opposite attitude from last year's. 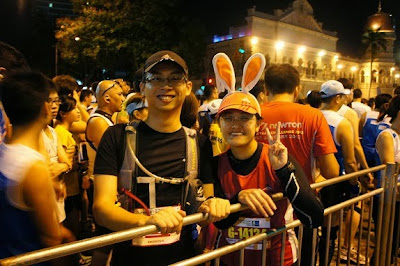 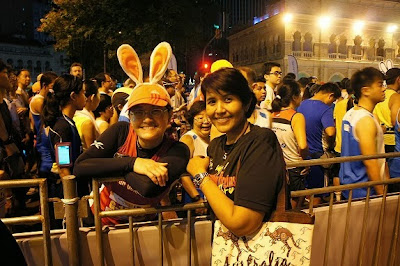 Before the race. Met a few people and the very very famous Kak June. I'll do the full marathon next year, KJ and meet you at KM36! ^^

Half-marathon flag-off was at 6.00am, one and a half-hour after the full marathoners were flagged-off and fifteen minutes after the Ekiden category.

I purposely set my Timex not to show the distance and I just have it show my timing. I ran according to feel today. Today's run was not about getting a PB (personal best). I haven't been running/training for the past two months. Whatever mileage I acquired these past months, was by cycling and walking. I slow-jogged a few times the past two weeks, but nothing more than 7K. That is definitely not enough for a half-marathon training!

Quite  a number of friends passed me. I used to pass them once upon a time, and now they all run faster than me. They ran further too, now. I am so proud of them yet I'm feeling sad too. Sad because of my stagnant performance. huk huk huk

Ah well. On to train for the next event in October. And November. And December. And January. HAHAHA

Anyway, I managed to maintain a 7:30 pace for the 1st 12km before losing focus and getting tired. Ate my first and only gel at the water station and washed it down with a cup of 100-Plus. Not a good idea. Tummy protested. Adui.

Good thing the water stations were ample and stationed at every 2km. I drank water after that and felt better.

I picked at banana at KM10.5 water station (I think) last year but I decided to give the banana a miss this year. Cold sponges were abundant and it was sooooo nice to wipe the hot, sweaty body with it.

I walked my first incline around KM14, I think. While walking a runner was like "Bunny! Come Come! Do you want my carrot?" - he was holding a banana by the way. It was funny that time but sound kinda wrong now! *dirty mind* LOL

The pace after KM12 was 8min pace. I contemplated at pushing all out after KM18 but I can't seem to really push myself. I am weak and lazy! Phiak Lina!

The final KM towards the finish line was really congested. You have all the categories merging at Sogo and man... was very crowded. Very very crowded. 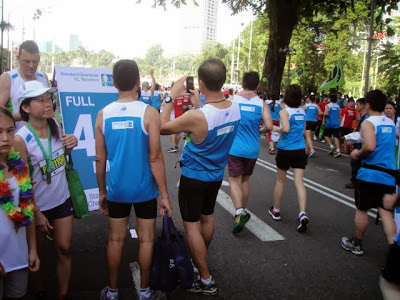 More crowding here. Created by a bottleneck effect and the fact that some runners who finished did not seem to notice that they were obstructing the road for finishing runners to run.

Some 10K runners were seen too keen to take a shot at the 42KM signboard that they just stand in the middle of the road, oblivious of other runners. I had to shout to them to be careful. We don't want a collision, do we? All I know, for a tired marathoner (that's those who run 42km folks, the effort to zig-zag too much around others might be too much).

Zaini was waiting right at the finish so he managed to get some nice finishing photos complete with timing in the background, not only for me but for other friends too. 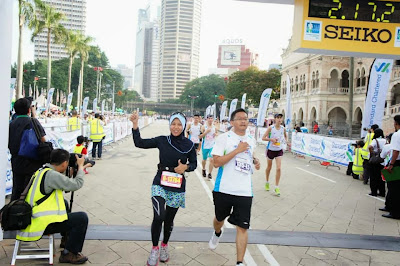 He managed to get there because 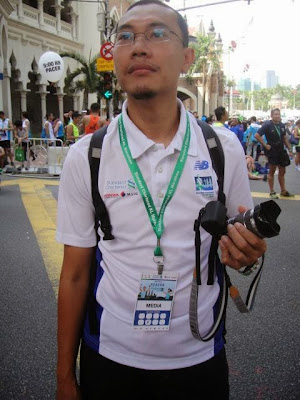 He was media! Yup, I was offered a media pass and I pass it to him.

Though getting the pass wasn't without drama. We were supposed to get it on race day but when we wanted to get to the media tent, we were stopped by the volunteers. When we told them that we are "media", they asked us to show our pass. "How to show our pass when we were supposed to go collect it first?" Well, they were very strict and told us to get the media pass. They sure are doing their job marvelously!

Good thing la I got the PR person's handphone number so called her so she can let us in. Haish.

As runners were finishing their run, Zaini stationed himself at the Full Marathon/Half-Marathon finish line for a while. 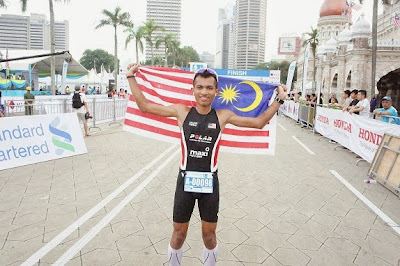 Managed to take a photo of Edan, who did a 2:54 full marathon. Congrats Edan!

Around 8.45am, both Zaini and Raimie made their way to the Kids' Dash starting line. Raimie was registered to do a 2.5km run. 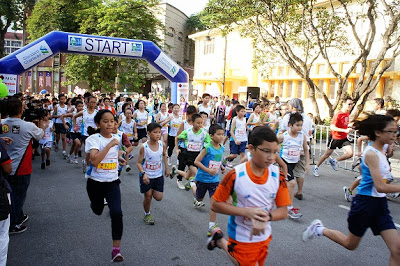 The kids, after flag-off. This is no kids stuff. A number of kids running had their timing watch! Whoah!

Not sure the total distance was correct at 2.5km. The flag-off was 8.50am. Raimie made it to the finish line around 9.03am. If it really was 2.5km, Raimie sure ran fast!

There were two categories. One was 700m Kids Dash. Raimie ran the 2.5km category. 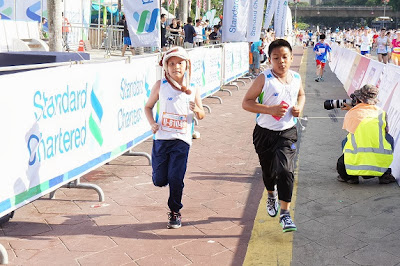 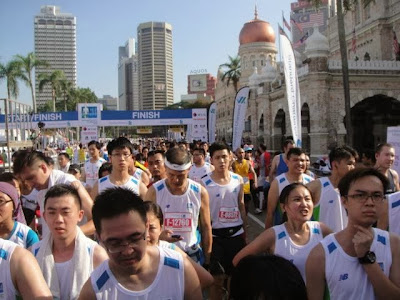 Super duper long queue after the finish line. Under the baking hot sun. I needn't wait long because instead  of just following the queue, Zaini called me to walk with my son at the fun run/10K finishing chute instead. Turned out the jam was because organisers had volunteers spraying runners legs.

But for me, I was out in a matter of minutes. Hehehe

Got my goodie bag, Raimie got his (he got free ice cream too) and heard my name being called out. 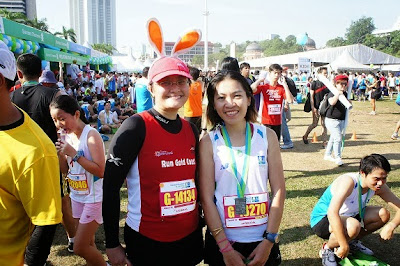 By Massy! We finally met again. We met the first time last year, on the route. While running in this same race and in the same category. ^^

After that, we decided it would be fun to show support to finishing marathon runners so we camped ourselves nearby 7-11 there to take photos, encourage, motivate and make a nuisance of ourselves. 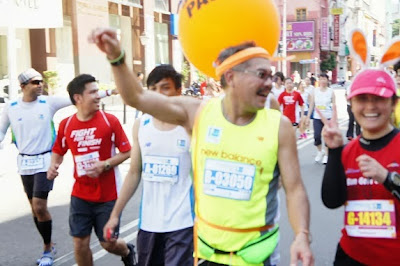 Following Kelvin. He's a 5:30 pacer. Very very havoc when he is nearby. LOL 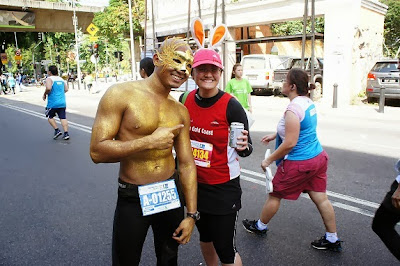 The gold man was there too. 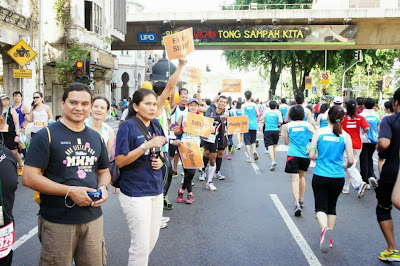 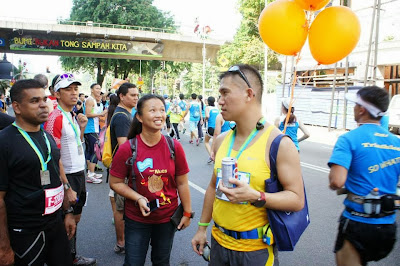 Those who were not running and those who had finished their run, supporting others. I love the spirit of these runners! 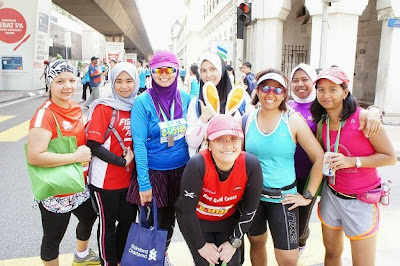 Took lotsa photos with the #Krazirunners gals and finally headed home around 10.50am. The day was fun!

All in all a great event. Volunteers were great. Quite a number cheered us and it was super appreciated.  Thank you to all volunteers for being there for us. ^^

KL drivers - haven't changed much. Lots of honking nearby Renaissance Hotel. Some irate drivers commenting over at SCKLM FB page about the jam too.

You know what... these people probably won't complain if the jam was caused by a "Jom Heboh" event or because of a sale but boy, were they mad when there were 33,000 non-motorise and non-polluting way of travelling (i.e. on foot) took over the road for a few hours! BRAVO!

Good job to all running in SCKLM. You are a winner! See you next year, yeah? :-)

In the meantime, enjoy some photos:
Album I
Album II
Email Post
Labels: Close to my heart Itchy Feet Out and About Race Recap