I should have something outdoorsy as a Sunday post but I have been such a lazy bum for the past ten days, after returning from our vacation from Japan. Adoi.

So since I didn't do any running (solo or in races) or any long walks with hubby during the last weekend or even this weekend, I'll just post something about a hike that we did in Japan. On our fourth day of vacation there. I started the morning with a short one hour run in my newly bought running attire. I haven't been running for days and with Fujisan Marathon coming up on Sunday that same week, I needed my runs.

So, despite going for a hike later, a run was done along Sumida River.

Taking the Toei Oedo Line from Kuramae Station to Shinjuku Station, we later changed to Keio Line to get to Takaosanguchi station. 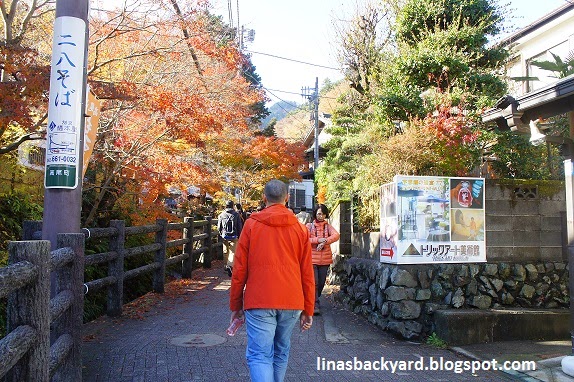 We were immediately greeted by an awesome autumn foliage upon exiting the station to start our hike. 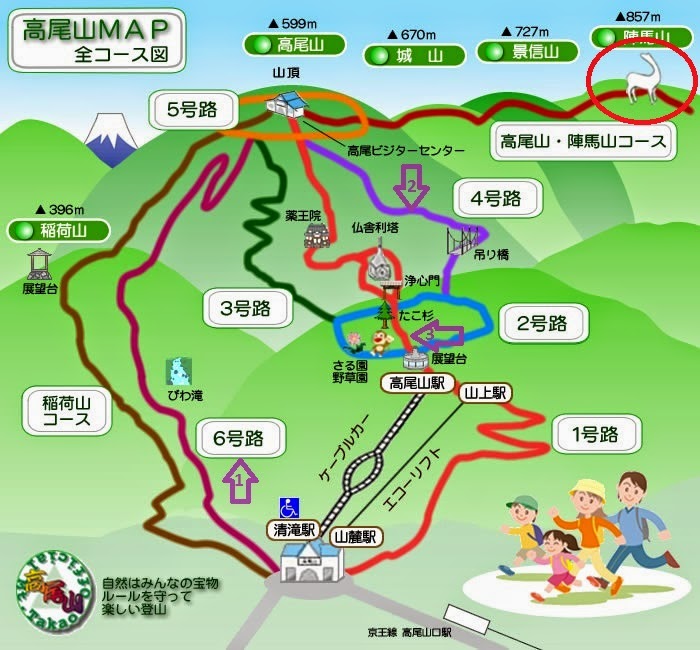 When we were planning for our trip, it was Zaini's plan to start from the station and hike the Mount Takao/Mount Jinba trail and get to the place where the white horse at the peak. The one that I circled in red in the map above. ^^

But I guess he had to take into account that I'll be running a marathon later that Sunday and we would probably be asking too much from our son to hike 18.50km (one way) so we instead chose a much shorter route. 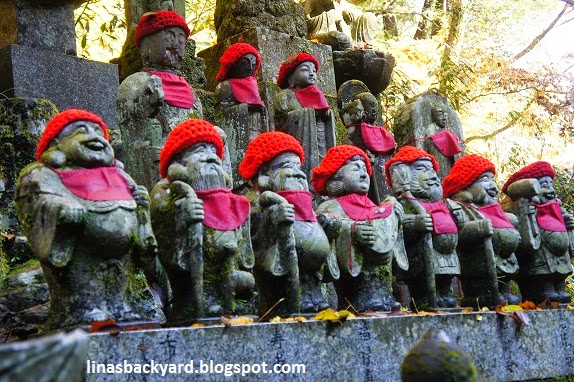 We followed the 6th trail (marked in a maroon line) that I marked with an arrow with "1" on the map. 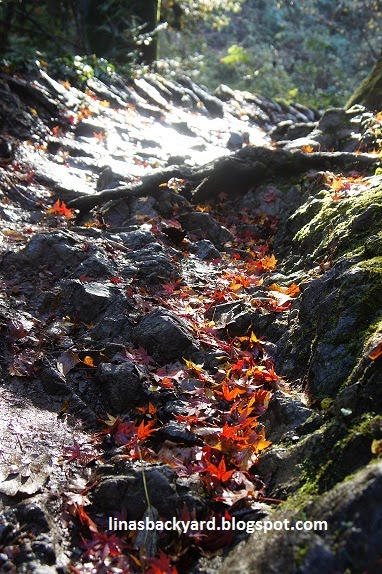 There were a few hikers on this route but the trail wasn't packed with them. The 6th trail was a mixture of easy trails and a bit of inclines here and there.

We took it easy, deciding to enjoy and savour the scenery and what an awesome sight we saw there. 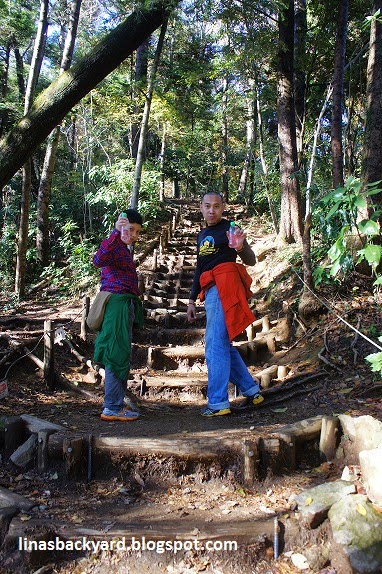 There were some steps that got Son grumbling a bit but of course he had no problem tackling it! ^^

The 6th trail (Biwa Waterfall trail) follows the Biwataki stream and we even pass by Iwayadaishi cave.

There were a few river crossings and a couple of times where we could get our feet wet (don't want lah... COLD) and there was a nice stone steps through the stream that we had to pass through. A workout but FUN! 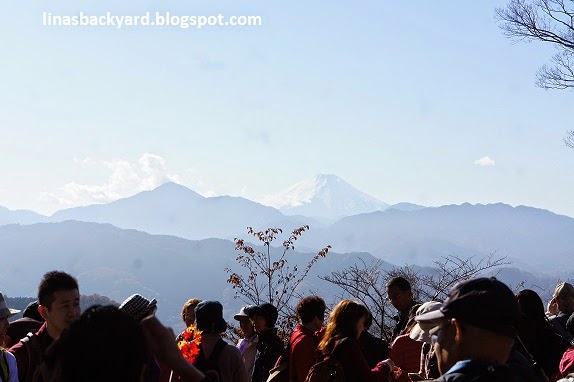 We got to the observation deck/peak after a hike of about 90 minutes and were immediately greeted by a swarm of people. Those who had use other trails (there were 8 trails to choose from, ranging in different difficulties and distance) or used the cable cars and everyone seems to congregate to this area.

For obvious reason. The view was stunning!

And one get to see Mount Fuji from here too! Can you see the mountain in my photo? ^^ 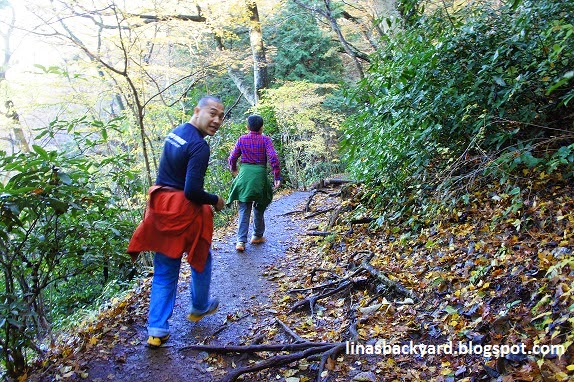 After a long break there, we then decided to head down using the 4th trail or the Suspension Bridge Trail. Very, very easy trail. The one I marked with an arrow with "2".

And because of its relative ease, this trail was packed with people. Even girls in heels! Knee length boots to boot! From Thailand! Who made themselves known as Thai by the din they made talking (or should I say shouting to each other). Huh.

Double huh as the guys smoked unashamedly while walking the trail, Hmph. 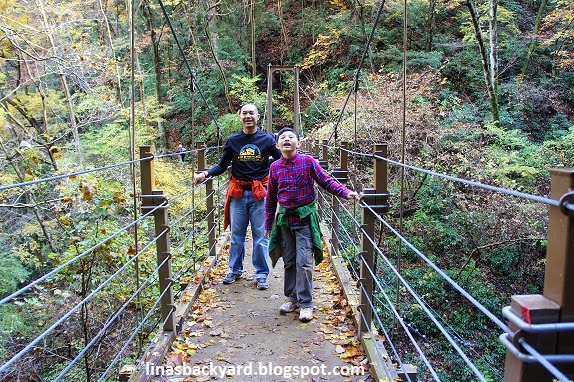 As the name of the trail indicated, there was a suspension bridge here and so fun walking on it.

We hiked up and down (mostly down lah as we were descending) to the Monkey Park and then decided to use the 2nd trail (Kasumidai Trail) as it looked like it has less hikers using it.

We were truly intent on avoiding the crowd, you see. 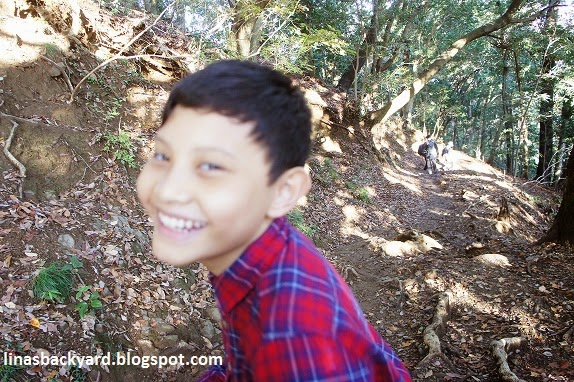 While Son grumbled a bit during the hike up, using the Trail no. 6, he was much happier when we were descending down this Kasumidai Trail (the one I marked with arrow with no. "3" in the map above). 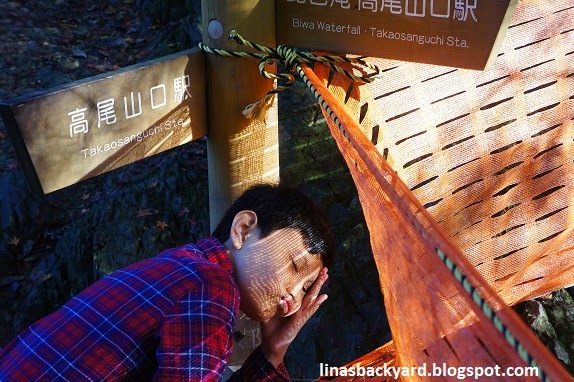 But alas, we can't descend towards the Biwa Waterfall again using this route. It was closed off. So down we went following the rest of the trail.

We didn't lose out on anything, because the view was spectacular. And as with the earlier Trail No. 6 that we did, there weren't too many hikers on this trail unlike Trail no. 4. So we got to savour the beauty of autumn in peace. 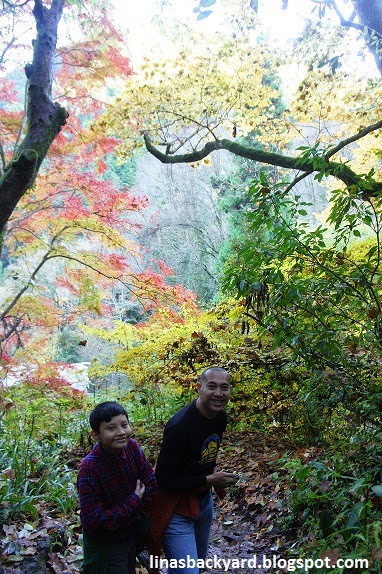 Plus, it is much easier to pose for photos or take lots of photos when there weren't a bunch of other people behind us! 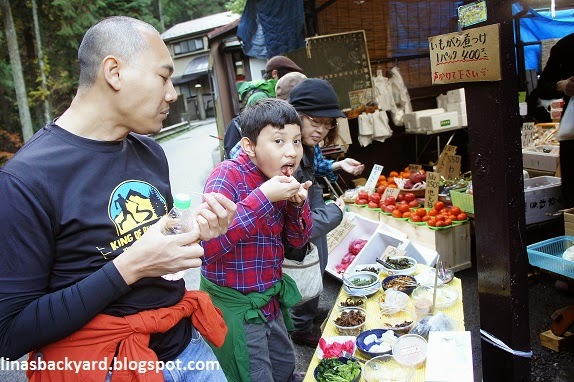 We got down and a few hundred metres before we reached the cable car station, we stopped at this stall/shop that sells pickles, fruits and veges.

Hubby and Son had a whale of time trying and testing the pickles.

The kind and generous proprietress even gave us some grilled sweet potatoes to try.

We ended up buying some persimmons there and ate them while walking down to the train station. So sweet and delicious. 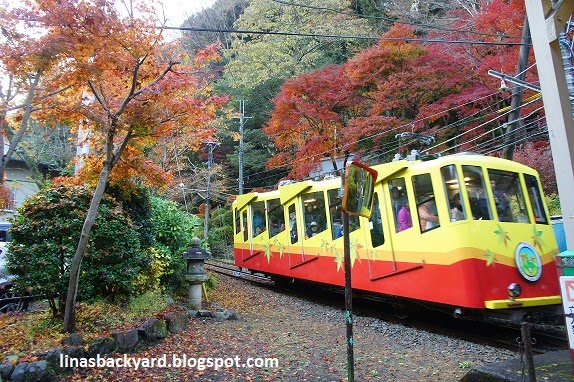 This is the cable car one can take up to the peak if you don't want to hike. :-)

The colour of the cable car matched the autumn foliage of the area!

A toilet break, a bit of stop to look at omiyages at the souvenir shops that lined the street in front of the cable car station; we then made our way back to Takaosanguchi Station.

There were pails with brushes at the station for us hikers to scrub the dirt on our shoes and we did that before taking the train back to our hotel.

Then, instead of immediately heading back to our hotel, after a four hour hike; we made our way to Bic Camera in Shinjuku and window shop a bit before finally head back for dinner and a quick rest... before making our way out again later in the evening.
Email Post
Labels: Close to my heart Gardens and Parks Out and About Travel - Japan Vacation